Cancel
Embedded with scintillating suspense and quirky comedy, this romantic thriller follows the twists and turns in the life of an American journalism student, Sondra Pransky, when she is given the name and identity of the tarot card serial killer of London, from an obstinate ghost. In the funeral of the famous British journalist Joe Strombel, his colleagues and friends recall how obstinate he was while seeking for a scoop. Meanwhile the deceased Joe discovers the identity of the tarot card serial killer of London. He immediately cheats the Reaper and appears to Sondra while she is on the stage in the middle of a magic show of the magician Sidney Waterman in London, and tells her that the murderer is the aristocrat Peter Lyman. Sondra travels to London, drags Sid into her investigation, and tries to infiltrate Lyman's privileged world to try and find out if he truly is a psychopathic serial killer, but soon finds herself falling in love with him. Was Joe Strombel's final scoop false? Will Sondra get her first big scoop or find true love?
See Storyline (May Contain Spoilers)

Laden with laughs, this romantic thriller begins at the memorial service for investigative reporter Joe Strombel (McShane), following which Strombel's spirit finds himself on the barge of death with several others, including a young woman who believes she was poisoned by her employer, Peter Lyman (Jackman). The woman tells Strombel she thinks Lyman, a handsome British aristocrat with political ambitions, may be the Tarot Card Killer, a notorious serial killer of prostitutes, and that he killed her when she stumbled onto his secret. The Tarot Card Killer left a card on each murder victim's body.

Sondra Pransky (Johansson) is a beautiful but awkward American journalism student on vacation in London. Pransky attends a performance given by magician Sid Waterman (Allen), aka "The Great Splendini", and agrees to participate on the stage. While in a booth known as The Dematerializer, Pransky encounters Strombel's ghost. The ghost has escaped the Grim Reaper himself to impart his suspicions of Lyman to a journalist who can investigate the story. Sondra decides to infiltrate Lyman's privileged world and find out if he truly is the dreaded criminal, enlisting Sid in the process and taking advantage of his powers of deception.

Sondra catches Lyman's attention by pretending to drown near him at an exclusive club's swimming pool. When he rescues her, she introduces herself as Jade Spence, daughter of a wealthy oil family from Palm Beach. While Sid poses as her father, "Jade" begins dating Lyman. Sondra is convinced Lyman is the murderer, but Sid finds it hard to believe.

As the film progresses, however, Sondra falls in love with Lyman and begins to trust him. Meanwhile, Sid becomes less sanguine about Lyman as he notices more and more inconsistencies, especially after Sondra finds a Tarot deck hidden under a French horn in Peter's vault, a climate-controlled music room containing expensive antique musical instruments. Sid finally prevails upon Sondra to write a news story implicating Lyman, but the newspaper editor refuses the story because of Sondra's lack of proof.

Throughout their investigation, Sid and Sondra have a relationship that is in turns friendly, paternal, and antagonistic—fueled largely by Sondra's annoyance that her smooth "Jade Spence" charade is being compromised by Sid's obnoxious attempts to act the part of a nouveau riche oil baron.

Soon the police arrest the real Tarot Card Killer. Sondra, relieved that her suspicions were for naught, reveals her real name and the deception she and Sid had practiced. Lyman is surprisingly gracious, and tells Sondra he desires to keep seeing her. They plan to spend the weekend at Lyman's isolated country estate. Later, Sid (at Strombel's urging) suggests that Lyman used the Tarot Card murders to cover up a murder he committed.

While Sondra and Lyman vacation in the country, Sid continues to investigate this theory. He finds that Lyman did frequent a prostitute, Betty Gibson, who was later killed, apparently by the Tarot Card Killer. Gibson is described as a "baby-faced blonde" (just like Sondra) before Lyman convinced her to dye her hair, presumably to match the profile of the other Tarot victims. When Sid calls Sondra with his findings, she waves them off. Unbeknownst to her, Lyman is ominously listening in on another extension.

Sid breaks into Lyman's vault again, this time finding a mysterious key, which turns out to be of Betty Gibson's flat. Meanwhile, out on a rowboat in Lyman's lake, Lyman confesses to Sondra that he killed Gibson to stop her blackmailing him, and he used the Tarot Card pattern to allay suspicion, just as Strombel had told Sid.

Lyman comments on the irony that he first met Sondra by saving her from drowning, and now she really would drown. He would kill Sid later; no one would connect an obscure stage magician's death to that of a clumsy journalism student. This scene is intercut with shots of Sid driving madly to the Lyman estate to rescue Sondra ultimately ending in a car crash.

After his confession, Lyman throws Sondra into the lake and watches her go under. He then calls the police to report her drowning death. When they question him, he tells them of how Sondra was a terrible swimmer and how she almost drowned that first day at the pool. Suddenly, Sondra enters, soaking wet but smiling cheerfully. She informs Lyman and the police that the drowning had been an act to get his attention, and actually she was a very good swimmer.

Back in the newspaper offices, the editor who previously rejected Sondra's article now congratulates Sondra on a brilliant piece of investigative journalism, the start of a promising career. Sondra seems flattered, and says she must also credit Joe Strombel and the late Sid Waterman, Splendini, who is now a passenger on the Reaper's ship, performing for his fellow spirits the same magical gags and comedy routines he did in life.

Based on 0 rating
0 user 0 critic
Did you know? The film is the second of Woody Allen's films (the other being Hollywood Ending (2002)) not to have a UK theatrical release. Read More
0 User Reviews
No reviews available. Click here to add a review.
Cast

Crew/Equipment Visible
There were several scenes where Scarlett Johansson's lapel mike radio frequency transmitter strapped on her waist behind her is visible.

Miscellaneous
Peter never asks Sondra how she got into his secure room to find the Tarot cards under the French Horn.

Continuity
When Sondra sits in the boat with Peter before he pushes her into the lake she wears beige / light brown clothes. When she returns to the house and happens upon Peter and the policemen, being still wet, her clothes are dark brown, almost black. That's too dark to be wet beige. It can't be muddy either, because the rest of her (hands, hair, face) are clean.

Continuity
When Peter is telling Sondra about the murder when they are out on the lake, the sky on Sondra's side alternate from dark to light between the shots.
Trivia:
The lead character (originally an adult journalist) was tailored specifically to Johansson, whom Woody Allen observed as having an unused "funny" quality about her while working on the previous film Match Point (2005).

Scoop is one of three 2006 films to feature both the topic of magic and magicians as main characters. The other two are The Illusionist (2006) and The Prestige (2006), the second of which also stars Hugh Jackman and Scarlett Johansson. Woody Allen was tutored magic and illusion for the movie by Scott Penrose.

The film is the second of Woody Allen's films (the other being Hollywood Ending (2002)) not to have a UK theatrical release.

The song that plays at the end of the movie, and used predominately as the theme throughout is called "In The Hall of the Mountain King". 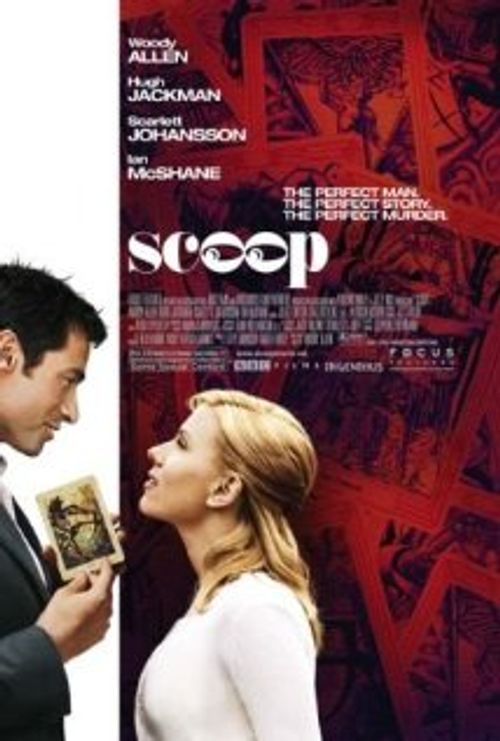