Cancel
A Police Officer, whose family was killed by a bandit named Gabbar Singh, decides to fight fire with fire and recruits two convicts, Jai and Veeru. He approaches them in jail, presents them with his proposal, and they agree to bring in Gabbar Singh alive - for a hefty price. After their discharge from jail, they travel by train to the village where the Police Officer lives; now, with the only other member of his family left alive, his widowed daughter-in-law. The three band together to fight one of the most elusive and dreaded bandits of all time. Will the two ex-cons be able to bring Gabbar alive to the Police Officer?

Tagline: The greatest story ever told

Based on 1 rating
0 user 11 critic
Did you know? 'Sholay' is considered a classic and one of the best Indian films. It was ranked first in the British Film Institute's 2002 poll of "Top 10 Indian Films" of all time. In 2005, the judges of the 50th annual Filmfare Awards named it the Best Film of 50 Years. Read More
11 Critic Reviews

The 3D works in gimmicky ways and adds a depth to the film that might have previously been absent
Tara Agarwal, Business of Cinema
0

The 3D version of Sholay is tedious and feels like a classic novel being turned into a children's pop-up book
Raja Sen, Rediff
0

The makers deserve to be lauded only for gifting the fans a chance to watch their favourite drama on big screen. As for its 3D conversion, the attempt is highly gimmicky
Mansha Rastogi, Now Running
0

Viju Khote
as Kaalia, another of Gabbar's men

Continuity
When Basanthi is being chased by bandits, while crossing the wooden bridge she does a small stunt, she moves the horse cart and breaks down the bridge and moves ahead, so the bandits are forced to take a detour to catch her. Veeru follows them and also find the bridge broken and take a detour. Both Basanti and Veeru are caught by the bandits and Jai rescues them later. While returning after being saved by Jai from Gabbar's den, Veeru, Basanti and Jai are seen crossing the same bridge which is fully intact.

Continuity
Sanjeev Kumar (Thakur) upon reaching home and finding his family members killed on lying on floor, he grabs the white cloth to uncover and see his dead grandson. He releases the cloth and the cloth flies away in wind. In the very next scene as he hurries towards the horse, the grandson's body is seen nicely wrapped with the white cloth.

Continuity
When Basanti goes to the temple, she was on foot. Veeru asks whether her mare ran away with cart. After Worshipping Lord Shiva, right before the song "Koi haseena", she rides her cart.

Continuity
Jai and Veeru are fighting the last encounter with the bandits. Jai is left alone to fight the bandits and he is using both the hands for holding the guns and pistols, keeps firing from them regularly. Later Veeru returns and holds Jai in his arms, during that period you can see Jai's both palms in open position, there are many shots and for many minutes that shows his open palm, but at the end Veeru is seen picking up the "Magic" coin from one of Jai's now closed fist.

Crew/Equipment Visible
In the song "Koi Haseena" when Veeru does wheeling on his cycle, we see a man's hand and head while holding front wheel.

Errors in Geography
The movie supposedly takes place somewhere in north India. In the first song, "Ye Dosti...." a roadside banner is seen written in Kannada, which is followed only in Karnataka in south India.
Trivia:
For the purpose of effective promotions and marketing to target the youth, the makers of 'Sholay 3D' created a mash up of the four songs from the movie.

Ahmad's murder sequence was so gruesome that the censor refused to pass it. It was finally changed to a symbolic shot of Gabbar crushing an ant!

In March 2012, Shaan Uttam Singh, the grandson of producer G.P. Sippy, said that he would sponsor a conversion of the film to 3D. It took INR 25 crore (US$3.8 million) to convert 'Sholay' into 3D format.

The Art Director of the movie, Ram Yedekar had an entire township built on the site. A prison set was constructed near Rajkamal Studio in Mumbai, also outdoors, to match the natural lighting of the on-location sets. One part of Ramanagara was for a time called "Sippy Nagar" as a tribute to the director of the film.

As of 2010, a visit to the "Sholay rocks" (where much the film was shot) was still being offered to tourists travelling through Ramanagara.

The character Gabbar Singh, was modelled on a real-life dacoit of the same name, who had menaced the villages around Gwalior, in the 1950s. Any policeman captured by the real Gabbar Singh had his ears and nose cut off, and was released as a warning to other policemen. The character was also influenced by the villain "El Indio" (played by Gian Maria Volonté) of Sergio Leone's 'For A Few Dollars More' (1965).

The film was loosely styled after Akira Kurosawa's 1954 film 'Seven Samurai', and drew heavily from the conventions of Westerns, especially Sergio Leone's Spaghetti Westerns such as 'Once Upon a Time in the West' (1968), and John Sturges' film 'The Magnificent Seven' (1960).

Much of Sholay was shot in the rocky terrain of Ramanagara, a town near Bangalore, Karnataka, over a period of 2 1/2 years. The filmmakers had to build a road from the Bangalore highway to Ramanagara for convenient access to the sets.

When first released, Sholay received negative critical reviews and a tepid commercial response, but favourable word-of-mouth publicity helped it to become a box office success. It broke records for continuous showings in many theatres across India, and ran for more than five years at Mumbai's Minerva theatre. By some accounts, 'Sholay' is the highest grossing Indian film of all time, adjusted for inflation. 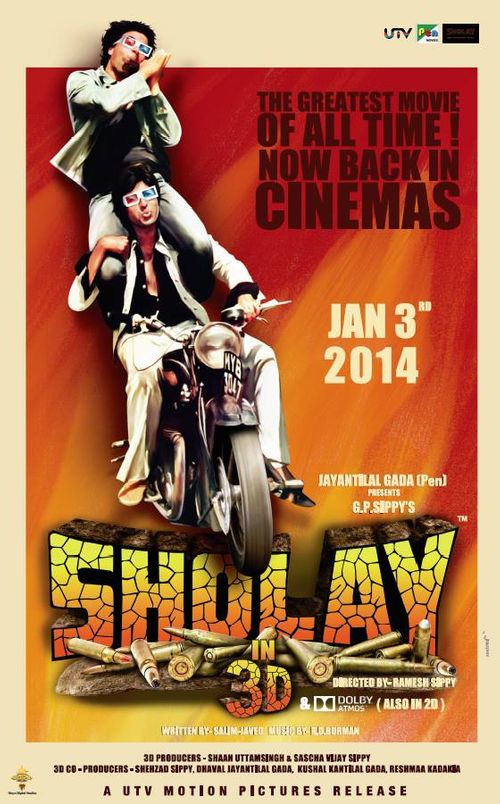 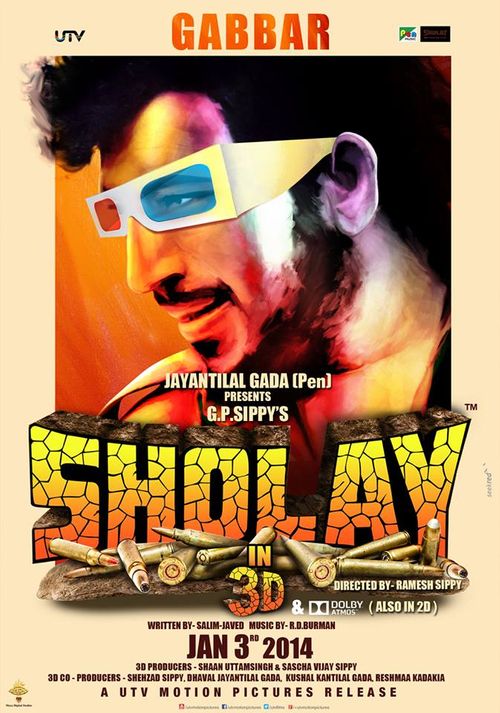 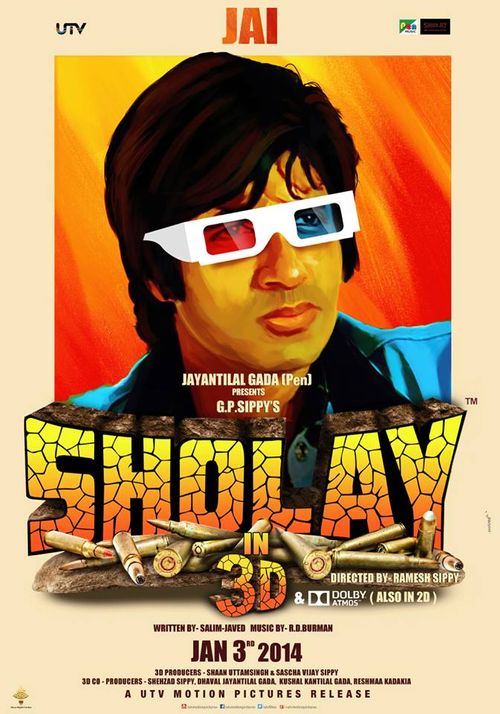 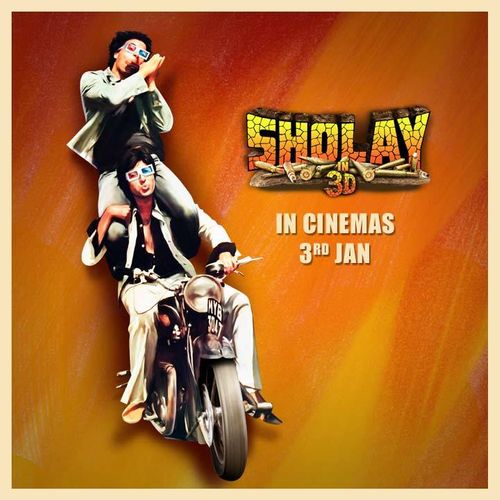 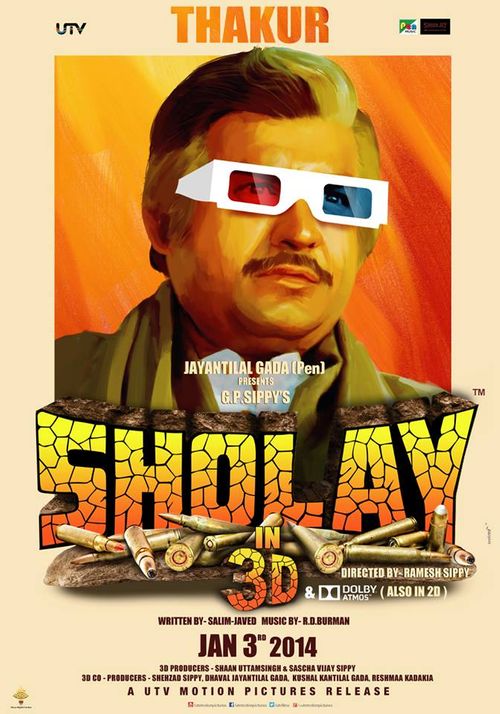 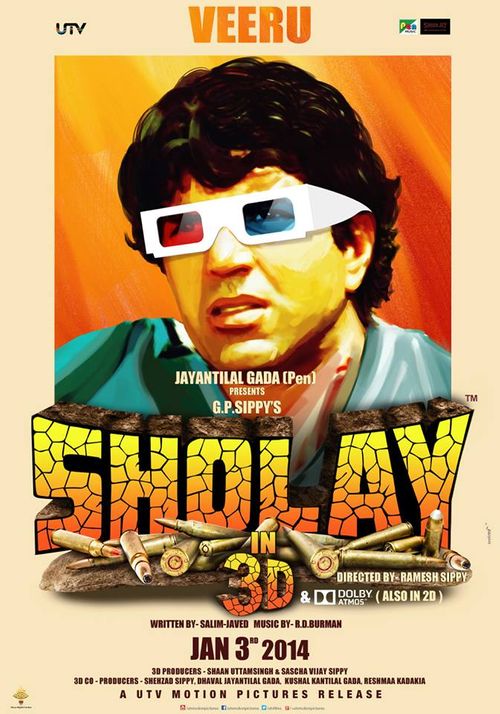