Cancel
Magical and melodiously musical, this full-length animation movie brings to life the fairytale story of Snow White, the fairest one of all! This multi-layered fable provides deep insights into human psychology and the ill-effects of greed, vanity and hatred. A tyrannical queen is inordinately jealous when her step-daughter, Snow White's beauty surpasses her own. So she abuses her and makes her work as a maid, eventually ordering for her to be murdered by a Huntsman. However, the Huntsman does not complete the task, instead urging her to flee the kingdom. Lost and all alone in a frightening world, Snow White finds refuge in the home of seven dwarfs. Meanwhile, the Queen hunts her down and tricks Snow White into biting into a poisoned apple, sending her into an indefinite death-like slumber. Will Snow White ever awaken? Will the Queen once more become the fairest beauty in the land?
See Storyline (May Contain Spoilers)

This classic animation story opens through a textual prologue told via a storybook, Snow White is a princess living with her stepmother, a vain and wicked Queen. The Queen fears that Snow White's beauty surpasses her own, so she forces Snow White to work as a scullery maid and asks her Magic Mirror daily "who is the fairest one of all". For several years the mirror always answered that the Queen was, pleasing her.

At the film's opening, the Magic Mirror informs the Queen that Snow White is now the fairest in the land. The jealous Queen orders her huntsman to take Snow White into the forest and kill her. She further demands that the huntsman return with Snow White's heart in a jeweled box as proof of the deed.

However, the huntsman cannot bring himself to kill Snow White. He tearfully begs for her forgiveness, revealing the Queen wants her dead, and urges her to flee into the woods and never come back. Lost and frightened, the princess is befriended by woodland creatures who lead her to a cottage deep in the woods. Finding seven small chairs in the cottage's dining room, Snow White assumes the cottage is the untidy home of seven orphaned children.

In reality, the cottage belongs to seven adult dwarfs, named Doc, Grumpy, Happy, Sleepy, Bashful, Sneezy, and Dopey, who work in a nearby mine. Returning home, they are alarmed to find their cottage clean and suspect that an intruder has invaded their home. The dwarfs find Snow White upstairs, asleep across three of their beds.

Snow White awakes to find the dwarfs at her bedside and introduces herself, and all of the dwarfs eventually welcome her into their home after they learn she can cook and clean beautifully. Snow White keeps house for the dwarfs while they mine for jewels during the day, and at night they all sing, play music and dance. Meanwhile, the Queen discovers that Snow White is still alive when the mirror again answers that Snow White is the fairest in the land and reveals that the heart in the jeweled box is actually that of a pig. Using magic to disguise herself as an old hag, the Queen creates a poisoned apple that will put whoever eats it into the "Sleeping Death", a curse that can only be broken by “love’s first kiss”.

The Queen goes to the cottage while the dwarfs are away, but the animals are wary of her and rush off to find the dwarfs. The Queen tricks Snow White into biting into the poisoned apple. As Snow White falls asleep the Queen proclaims that she will be the fairest of the land. The dwarfs return as the Queen leaves the cottage and give chase, trapping her on a cliff. She tries to roll a boulder over them but before she can do so, lightning strikes the cliff, causing her to fall to her death.

The dwarfs return to their cottage and find Snow White seemingly dead, being kept in a deathlike slumber by the potion. Unwilling to bury her out of sight in the ground, they instead place her in a glass coffin trimmed with gold in a clearing in the forest. Together with the woodland creatures, they keep watch over her.

After some time, a prince, who had previously met and fallen in love with Snow White, learns of her eternal sleep and visits her coffin. Saddened by her apparent death, he kisses her, which breaks the spell and awakens her. The dwarfs and animals all rejoice as the Prince takes Snow White to his castle.

Based on 1 rating
0 user 0 critic
Did you know? To give Snow White a more natural look, some of the ink and paint artists started applying their own rouge on her cheeks. When Walt Disney asked one how they would apply the rouge correctly for each cel, she responded, "What do you think we've been doing all our lives?" Read More
0 User Reviews
No reviews available. Click here to add a review.
Cast

Harry Bayless Stockwell
as The Prince

Music Director
Frank Churchill
Leigh Adrian Harline
Paul J Smith
Technical Details
Film Type:
Feature
Language:
English
Colour Info:
Color
Sound Mix:
Stereo
Camera:
Bell & Howell Eyemo
Frame Rate:
24 fps
Aspect Ratio:
1.37:1
Stereoscopy:
No
Fun Stuff
Taglines:
Walt Disney's new characters in his first full-length production!
The happiest, dopiest, grumpiest, sneeziest movie of the year.
See for yourself what the genius of Walt Disney has created in his first full-length feature production
Heigh Ho, Heigh Ho, We're Back!! (1958 re-release)
Still the fairest of them all!
The best loved musical of all time.
The Show Sensation Of The Generation!
Behold - The Miracle Of The Movies! - Coming To Amaze You, Charm You, Thrill You
The one that started it all.
Goofs:
Revealing Mistakes
When the dwarfs are coming out of the tunnel after work to sing "Heigh Ho," Grumpy and Happy suddenly appear.

Revealing Mistakes
Where the Doc removes the bed cover from Snow White while she is sleeping on the dwarfs' beds, for a few frames you can clearly see artist's mistakes of an outline of Doc's hand having been drawn in the wrong place for the frames.

Continuity
Sleepy and Bashful's beards are the longest in most of the film, with Grumpy's beard shorter. However, when the dwarves peer over the edge of the cliff to see the Witch's demise, Grumpy's beard is suddenly longer than the others by far.

Continuity
During the dwarfs' trek home from the mine, Dopey suddenly has a lantern hanging off his pick-axe that wasn't there when the trip started.

Continuity
When Snow White first enters the dwarfs' house, the animals follow her in. Near the door, there is a rabbit and another rabbit walks beside it. As the second rabbit passes the first one (behind it), it changes into a brown squirrel.

Continuity
Doc's lantern disappears when he and the other dwarfs reach the house after their work in the mine.

Continuity
Dopey breaks off the front door handle and seconds later, it reappears.

Continuity
When the dwarfs arrive home after working, they drop their tools and scurry behind the trees. A couple of minutes later, they have their tools again.

Continuity
When the birds are putting yellow flowers in the vase, right before they put the final one in that sticks up a bit in the middle, a flower that ends up right behind it appears out of nowhere.

Continuity
As Snow White is piling clothes on top of the deer, birds drop a green cloth over the chipmunk on the deer's back. In the next shot, the cloth is now a shirt sleeve.

Continuity
When Snow White is cleaning the cabin, the birds put daffodils in the vase. Later, before Bashful shoves the flowers into Sneezy's face and he sneezes, the flowers have turned into goldenrod.

Audio/Video Mismatch
When Snow White is kissing all of the dwarfs' foreheads, before she kisses Dopey, you hear her say "Oh, Dopey!" but her lips never move.

Character Error
In the last scene, the Prince shimmies. The cels weren't lined up correctly when the scene was shot, and his body shakes. Walt Disney was horrified when he saw the mistake in the color dailies, and wanted it corrected. No money was available to make the correction because the film was already far over budget, so Walt's brother and business partner, Roy O. Disney, declared, "Let the Prince shimmy!" and so he did - until 1993, when the mistake was corrected during Disney's digital restoration of the film.

Character Error
At the final scene when Snow White kisses the dwarfs, she kisses them all except for Sleepy.

Character Error
When Doc is assaying the (already cut) gemstones from the mine, he puts the jeweler's loupe into his eye backwards.

Character Error
When Snow White decides to clean the dwarfs' house, she takes off her cape and hangs it on the wall. When the dwarfs return from the diamond mine later and are shocked to find the house clean, the cape is gone and it never returns for the rest of the movie.
Trivia:
Based on the German fairy tale by the Brothers Grimm, it is the first full-length cel animated feature film and the earliest in the Walt Disney Animated Classics series.

The "special" Academy Award granted to this picture consisted of one regular sized award and seven smaller sized awards.

To give Snow White a more natural look, some of the ink and paint artists started applying their own rouge on her cheeks. When Walt Disney asked one how they would apply the rouge correctly for each cel, she responded, "What do you think we've been doing all our lives?"

Was the first of many Walt Disney films to have its premiere engagement at New York City's Radio City Music Hall. At the end of the film's initial engagement there, all the velvet seat upholstery had to be replaced. It seems that young children were so frightened by the sequence of Snow White lost in the forest that they wet their pants, and consequently the seats, at each and every showing of the film.

When this movie was released, it was generally accepted that the correct plural form of "dwarf" was "dwarfs". J.R.R. Tolkien's "The Hobbit" (published a year earlier) and later "Lord of the Rings" gradually popularized the uncommon variant "dwarves", so that the dwarfs in this movie are today often erroneously referred to as "dwarves" and the title even given as "Snow White and the Seven Dwarves".

Walt Disney wanted to keep Snow White's voice as a special one-time sound, and held Adriana Caselotti to a very strict contract. Except for a tiny bit part in The Wizard of Oz (1939), she never had a real singing part in a movie again, though she was a classically trained singer.

At a recording session, Lucille La Verne, the voice of the Wicked Queen, was told by Walt Disney's animators that they needed an older, raspier version of the Queen's voice for the Old Witch. Ms. Laverne stepped out of the recording booth, returned a few minutes later, and gave a perfect "Old Hag's voice" that stunned the animators. When asked how she did it, she replied, "Oh, I just took my teeth out."

Some animators were opposed to the name Dopey, claiming that it was too modern a word to use in a timeless fairy tale. Walt Disney made the argument that William Shakespeare used the word in one of his plays. This managed to convince everyone, although any reference to the term "dopey" is yet to be found in any of Shakespeare's work. 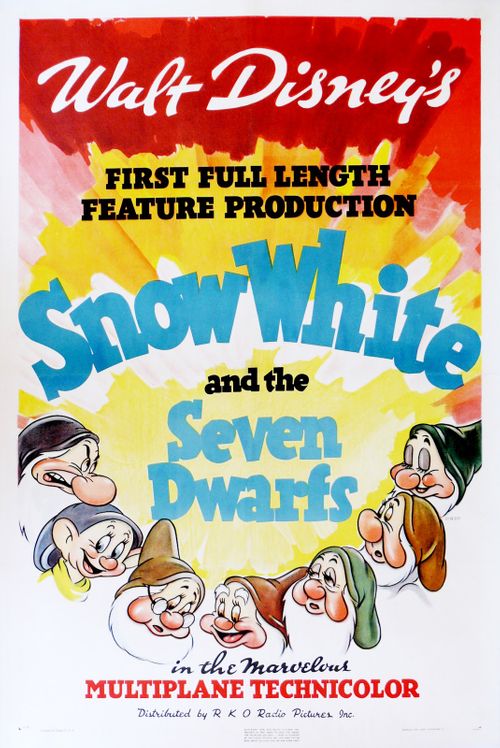 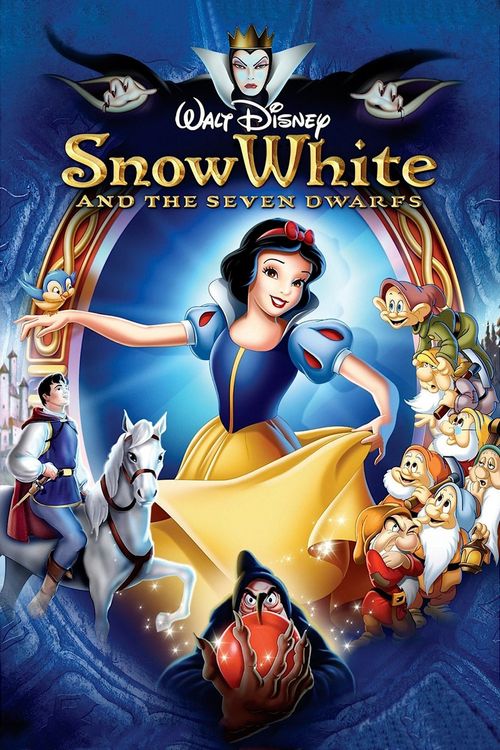 Snow White and the Seven Dwarfs 1938