Cancel
Swackhammer, owner of the amusement park planet Moron Mountain is desperate get new attractions and he decides that the Looney Tune characters would be perfect. He sends his diminutive underlings to get them to him, whether Bugs Bunny & Co. want to go or not. Well armed for their size, Bugs Bunny is forced to trick them into agreeing to a competition to determine their freedom. Taking advantage of their puny and stubby legged foes, the gang selects basketball for the surest chance of winning. However, the Nerdlucks turn the tables and steal the talents of leading professional basketball stars to become massive basketball bruisers known as the Monstars. In desperation, Bugs Bunny calls on the aid of Micheal Jordan, the Babe Ruth of Basketball, to help them have a chance at winning their freedom.
See Storyline (May Contain Spoilers)

In 1993, professional basketball player Michael Jordan announces his retirement from the NBA to follow in his father's footsteps and turns to a career in baseball. Despite his popularity, Jordan's talent for baseball is nowhere near his talent for basketball. Meanwhile the Nerdlucks, a group of criminal aliens led by their boss Mister Swackhammer (voiced by Danny DeVito), plot to capture the Looney Tunes, who really exist in a secret animated world called Looney Tune Land (hidden at the center of the Earth), and make them their newest attractions at Moron Mountain, a failing amusement park. Swackhammer believes enslaving the Tunes in this way will bring in more customers and save Moron Mountain from foreclosure.

They arrive in Tune Land and since the aliens aren't very intelligent or tall, the Tunes bargain for their freedom by challenging the Nerdlucks to a basketball game. To ensure their victory, the Nerdlucks return to Earth and steal the talents of Patrick Ewing, Larry Johnson, Charles Barkley, Muggsy Bogues, and Shawn Bradley, who are rendered incapable of playing basketball as a result. Through their basketball, the Nerdlucks absorbed the stolen talent into their bodies, and transform into gigantic creatures-- now called the Monstars-- that the Looney Tunes are unable to defeat.

To help the Tunes win the game, Bugs Bunny abducts and recruits Michael Jordan, who reluctantly agrees to help after the Monstars squash him into the shape of a basketball and bounce him around like one. A new arrival named Lola Bunny, on whom Bugs develops a crush, is added to the team thanks to her talent. Bugs and Daffy Duck go to Jordan's house to collect what he needs to play, barely dodging his family dog Charles. Jordan's publicist, Stan Podolak (Wayne Knight), sees Bugs and Daffy return to Tune Land, follows them, and stays to support Jordan, whose team will be called the Tune Squad.

Back on Earth, the sudden inability of five top NBA players to play basketball captures the attention of the media-- and the rest of the NBA-- as more and more NBA teams refuse to take the court, fearing the same phenomenon will attack them. The five NBA players themselves go through a series of physical, medical, psychological and spiritual tests to figure out why they have no talent anymore, to no avail. Eventually all NBA stadiums are quarantined and the season is declared officially over until further notice.

Back in Looney Tune Land, the two teams take the court. Despite Jordan's leadership, the Monstars dominate the first half of the game. Stan sneaks into the Monstars' locker room and overhears them talking about how they stole the talent from the NBA players, but he is detected despite hiding in a locker and scorched as a result. Stan then informs Jordan and the Tune Squad that the Monstars stole the talent from the NBA players. Bugs then motivates the team with a "special drink" and the Monstars' commanding lead is reduced to a significantly smaller margin. Seeing Swackhammer angry that the Monstars did not steal Jordan's talent, Jordan takes the chance to raise the stakes. If the Tune Squad wins, the Monstars must give the NBA players their talent back, but if they lose, then Swackhammer is to spare the Looney Tunes in exchange for Jordan. He readily accepts it and Bugs tries to talk him out of it, all the while being aware of what it means if Jordan is subjected to humiliation on Moron Mountain for all time.

As the game resumes, the Monstars, under orders from Swackhammer, begin playing even dirtier than before. As a result, the Looney Tunes are injured, one by one, until only Jordan, Bugs, Lola, and Daffy are left, leaving them short one player. In the process, Bugs saves Lola from being squashed by one of the Monstars, which fills Lola with gratitude, and she kisses him. Reluctantly, Jordan puts Stan in the game, and though he is quickly taken out of action, he manages to bring the Monstar's lead down to one. With 10 seconds left, Marvin the Martian, the referee, tells them that if there is no fifth player, the team will forfeit the game. At the last second, Bill Murray, who had played golf with Jordan earlier in the film, appears in the stadium and joins the team, breaking the fourth wall along the way, as Swackhammer quips, "I didn't know Dan Aykroyd was in this picture," referring to Murray's co-star from Ghostbusters.

With only seconds left, Murray pulls some clever manueuvering and gets the ball to Jordan. Extending his arm to superhuman lengths (since the laws of physics work differently in Tune Land), Jordan makes the basket and wins the game. Although Murray has always dreamed of being an NBA player, and Jordan is impressed with his skills, Murray decides to retire from basketball forever. Jordan then helps the Monstars realize that they're bigger than Mister Swackhammer, who confronts them for losing. Fed up with their abusive boss, the Monstars tie him up to a rocket and send him to the moon. At Jordan's request, they reluctantly return the stolen talent to the other players by transferring them to a basketball, which is how they stored the stolen talent earlier in the film. This reverts the Monstars back to the tiny Nerdlucks. Refusing to return to Moron Mountain, the Nerdlucks decide to stay with the Looney Tunes, who only agree if the Nerdlucks can prove themselves to be 'Looney', which they arguably complete on the spot. As Jordan leaves, he tells Bugs to stay out of trouble. Bugs assures him he will and shares a kiss with Lola.

After Jordan and Stan return to Earth in the Nerdlucks' spaceship, Jordan makes a dramatic appearance with Stan at a baseball game to the cheers of the audience, despite being late. The next day, Jordan and Stan give the stolen talent back to the NBA players, who immediately regain their lost skills. Jordan is later prompted by his rivals to return to the NBA, mirroring his real-life comeback with the Chicago Bulls.

Tagline: Get ready to jam

Based on 0 rating
0 user 0 critic
Did you know? The idea of the movie was first inspired from Nike ads, where the Bugs Bunny and Michael Jordan face off against Marvin the Martina and his aliens' henchmen in basketball Read More
0 User Reviews
No reviews available. Click here to add a review.
Cast

Continuity
Lola is not among the toons exercising to the Richard Simmons video but appears in the gym out of nowhere, just after Michael Jordan enters in his uniform.

Crew/Equipment Visible
When Stan Podolak falls in Birmingham Barons' dugout, we can clearly see the mat that he falls on.

Revealing Mistakes
When the Dog(Charles) jumps on Michael Jordan to lick him, when he comes back from his baseball game, the dog is clearly stuffed animal.
Trivia:
Space Jam used a website in their promotion process and it can still be found in online exactly as it appeared in 1996.

Michael Jordan actually wore his college basketball shorts under his Chicago Bulls uniform every game as a good luck charm.

The idea of the movie was first inspired from Nike ads, where the Bugs Bunny and Michael Jordan face off against Marvin the Martina and his aliens' henchmen in basketball

Space Jam is the first animated movie to be edited for TV airings. 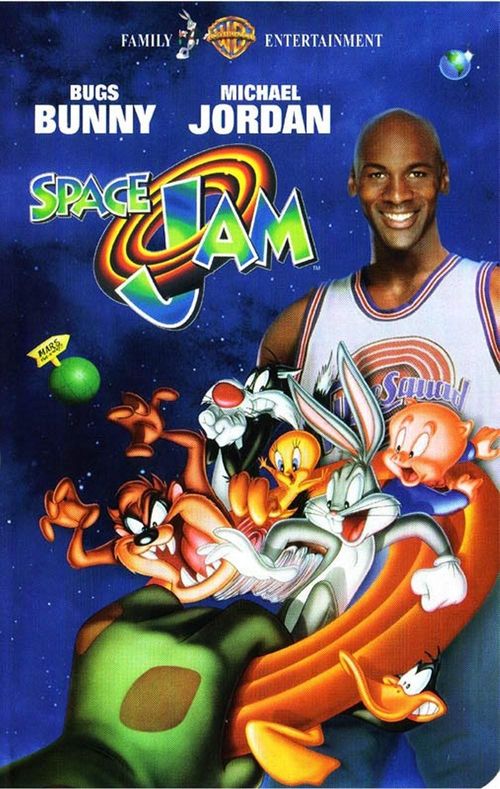