Cancel
Suspenseful and scintillating, this action-oriented thriller traces the twists and turns in the life of Nathan Muir (Redford), an experienced CIA operative who is on the brink of retirement, when he finds out that his protege Tom Bishop (Pitt) has been arrested in China for espionage. No stranger to the machinations of the CIA's top echelon, Muir hones all his skills and irreverent manner in order to find a way to free Bishop. As he embarks on his mission to free Bishop, Muir recalls how he recruited and trained the young rookie, when he was on assignment as a sergeant in Vietnam, their turbulent times together as operatives and the woman who threatened their friendship.
See Storyline (May Contain Spoilers)

This fast-paced spy thriller is set in 1991, when the governments of the U.S. and China are on the verge of a major trade agreement, with the President of the United States due to visit China to seal the deal.

It is at this critical juncture that the CIA learns that its agent Tom Bishop (Brad Pitt) has been captured trying to free a Briton, Elizabeth Hadley (Catherine McCormack), from a People's Liberation Army prison in Su Chou near Shanghai, China. Bishop is being questioned under torture and will be executed in 24 hours unless the U.S. government claims him. If the CIA claims Bishop as an agent, they risk jeopardizing the trade agreement. Exacerbating Bishop's situation is the fact that he was operating without permission from the Agency.

Attempting to deal quickly with the situation, CIA executives call in Nathan Muir (Robert Redford), an aging mid-level case officer on his last day before retirement and the man who recruited Bishop. Although they tell Muir they simply need him to act as a "stop gap" to fill in some holes in their background files, the officials are hoping he will give them the pretext they need to justify letting Bishop die.

The CIA executives are unaware that Muir had been tipped off about Bishop's capture prior to arriving at the CIA's headquarters, by fellow CIA veteran Harry Duncan (David Hemmings), for whom Bishop had been working an operation in Hong Kong before going rogue. Muir first attempts to save Bishop by leaking the story to CNN through a contact in Hong Kong, believing that public pressure would force the CIA to rescue Bishop.

The tactic only stalls them, however, and is stymied when a phone call to the U.S. Federal Communications Commission from CIA Deputy Director Charles Harker (Stephen Dillane) results in CNN retracting the story.

During the debriefing, Muir describes how he recruited Bishop for an operation when Bishop was a U.S. Marine scout sniper during the Vietnam War. Muir also discusses their 1976 tour of duty in Berlin, Germany, where Bishop was tasked with procuring East German assets, with Muir commanding, as well as Bishop's spy work in Beirut, Lebanon in 1985 during the War of the Camps, the latter being the last time the two saw each other.

During the mission in Lebanon, Bishop met Hadley, and the two began developing romantic feelings for each other. However, it is revealed that Hadley was involved in a bombing of the Chinese embassy in Britain, causing her to flee the country. Fearing that Bishop's feelings for Hadley might compromise his cover and the mission, Muir tips off the Chinese to Hadley's location in return for freeing an arrested U.S. diplomat.

Chinese agents kidnap Hadley, and Bishop cuts all ties to Muir when he discovers his involvement. After learning Hadley was the target of Bishop's rescue attempt, Muir finally realizes that he has greatly underestimated Bishop's feelings for her.
Running out of time, Muir secretly creates a forged urgent operational directive from the CIA director to commence Operation Dinner Out, a rescue mission to be spearheaded by Commander Wiley's (Dale Dye) U.S. Navy SEAL team, for which Bishop had laid the groundwork as a "Plan B" for his own rescue attempt.

Using US$282,000 of his life savings and a misappropriated file on Chinese coastline satellite imagery, Muir enlists Duncan's help in bribing a Chinese energy official to cut power to the prison for 30 minutes, during which time the SEAL rescue team retrieves Bishop and Hadley.

Bishop, who is rescued at the end of the film 15 minutes before his scheduled execution, realizes Muir was behind his rescue when he recognizes the name of the plan to rescue him, Operation Dinner Out: a reference to a birthday gift that Bishop gave Muir while they were in Lebanon. When the CIA officials are belatedly informed of the rescue, Muir has already left the building and is seen driving off into the countryside.

Tagline: It's not how you play the game. It's how the game plays you.

Based on 0 rating
0 user 0 critic
Did you know? Kimberly Paige, playing the part of Sandy at the embassy in Berlin, is wife of the former US ambassador to Hungary, the location where the Berlin scenes were filmed. Read More
0 User Reviews
No reviews available. Click here to add a review.
Cast

Miscellaneous
While in Lebanon in 1985, Tom is wearing a style of San Diego Padres hat that did not exist until the early 1990s.

Miscellaneous
There are no American military bases in Penghu. All US military personnel were withdrawn from the Republic of China (including Penghu) after the US switched diplomatic recognition to mainland (Communist) China in 1979.

Audio/Video Mismatch
Approximately in the middle of the movie, when the train is arriving at the platform in Berlin and Bishop gets off, we can hear the train bell. The bell is common for US railroads but is not used in Europe.

Audio/Video Mismatch
The motorcycle in the building bombing scene is clearly a 4 stroke motorcycle. You can know this by the throttle has two cables as on a 4 stroke (a 2 stroke only has one). Also you can see the exhaust header is small like a 4 strokes as compare to a 2 stroke which is very fat. When the motorcycle rider pulls out of the basement you can hear that it is a 4 stroke. It makes a 4 stroke sound - low, thumping sound. But in the scenes on the road, and when doing the jump, they used a 2 stroke motor for the sound effect - high pitched, high revving, pinging sound.

Character Error
When Harry Duncan counteroffers $282,000 to the Chinese General to shut off the power, he actually said $2,820,000 in Chinese instead.

Character Error
Once Operation Dinner Out is accomplished, the pilot of the helicopter identifies himself over the radio with a Blackhawk ID. This is in line with Muir requesting "02 MH-60K" from Commander Wiley. Yet, the helicopters in use were not Blackhawks, but Hueys.

Character Error
Muir, after having Bishop elicit a piece of information, tells Bishop he gave out 4 facts about himself (Bishop) for one dubious piece of information: "You're straight, you're engaged, tomorrow is your girl's birthday, and you have no taste in women's fashion... What if she was an asset: You told her four lies that now have to be true." But Bishop *is* straight. He only told 3 lies.

Continuity
When posing as a photojournalist, Tom Bishop carried two cameras: a Nikon and a Leica. While in photographing the doctor and an injured child in Lebanon, Tom's camera switches back and forth between his Leica and his Nikon, depending on the camera angle. From the front he is shown shooting with his Lecia (with external range finder), then in the same moment he is shown shooting with his Nikon (the silver body and empty hot shoe are visible), then again with his Leica.

Continuity
When Bishop is brought onto the helicopter two soldiers proceed to stand on the skid of the helicopter as it begins its takeoff. The soldiers disappear in the next shot, when the helicopters are several feet in the air.

Errors in Geography
The USA has no embassy in Hong Kong. Embassies only exist in the capital of an independent nation, not in a colony. The U.S. has a consulate in Hong Kong. In the two live TV reports from Hong Kong the reporter correctly refers to the U.S. Consulate in Hong Kong, even though he's standing in front of a building marked as "Embassy".
Trivia:
Tony Scott asked for more money to film the rooftop scene in "Berlin" (in order to rent a helicopter for an aerial scene) but the producers refused. Scott believed that the scene was important and rented the helicopter with his own money.

The scene where Robert Redford's character asks Brad Pitt's character if he knew anybody in 'this apartment house' and tells him to be up on one of the balconies in five minutes is from a book by former Mossad agent Victor Ostrovsky who describes this test as part of the training of a Mossad agent.

On being introduced to Robert Redford, Omid Djalili joked "Mr. Redford, delighted to meet you - I loved you when you starred in Hawaii Five-O (1968). Without missing a beat Redford fired back "Well thanks, and I loved you in Doctor Zhivago (1965), although you have let yourself go since then"

Part of the film was originally set to have been filmed in Israel, but due to the sudden escalation of the Israeli-Palestinian conflict (in September-October 2000), and following the requirements of the actors' insurance companies, the filming took place in Morocco instead.

Nathan Muir's personal car is a Porsche 912, basically a 911 with boxer 4 engine produced for a short while in the late 60s.

In the scene where Nathan enters his office after the CIA employees rummaged through it we can see director Tony Scott's faded red hat on the right next to the door.

The coffee cup Bishop drinks from before finding Hadley's empty apartment is nearly identical to the coffee cups seen at CIA in Langley.

Kimberly Paige, playing the part of Sandy at the embassy in Berlin, is wife of the former US ambassador to Hungary, the location where the Berlin scenes were filmed.

Dedicated to the memory of Elizabeth Jean Scott (died 2001), mother of Tony Scott and Ridley Scott.

Tony Scott dedicated this film in memory of his mother. His brother Ridley Scott did the same with Black Hawk Down (2001).

The building identified as the US Embassy in Hong Kong is actually the headquarters of HSBC - the Hong Kong and Shanghai Banking Corporation.

When the film was previewed in the summer of 2001, Brad Pitt said that it dealt with blow back from unsuccessful CIA operations and suggested that it might mean America had been the world's leading power for too long. However, after the 9/11 attacks, Pitt was quoted as saying the movie indicated that CIA operatives were needed "now more than ever".

Dutch Oscar-winning director Mike van Diem was once attached to the project. 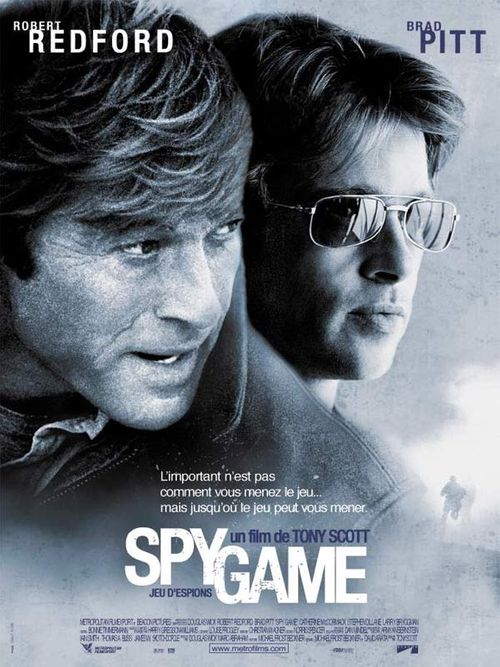