Cancel
Rapunzel, a beautiful tower-bound teen, yearns to see the world, when a thief helps her escape, an excitingly comical adventure begins.

Based on 0 rating
0 user 2 critic
Did you know? This is the first animated Disney "princess" film to get a PG rating by the MPAA, the previous ones all being Rated G. Read More
2 Critic Reviews

The return of Tangled brings charm and a fun continuation of Rapunzel's story.
Amy Ratcliffe, IGN
0

Disney's Rapunzel update has a savvy sense of humour and serviceable songs, but it's a traditional romance at heart
Tim Robey, The Telegraph
0

MC Gainey
as Captain of the Guard

Flynn Rider's character design came from the process called the "hot man meeting" by Nathan Greno and Byron Howard, during which they set up a meeting with all of the female employees of the studio in one room and asked them for their opinions of what made a man good-looking, in order to create Flynn's character design with features such as eye color, hair color and style and body type. Video footage showed concept art and photos of various male celebrities, including Johnny Depp, Hugh Jackman, Brad Pitt, David Beckham and Gene Kelly, on the walls of the room.

Despite being popular with critics and audiences alike, Disney's previous animated feature The Princess and the Frog (2009), was a box office disappointment. Disney felt that the film's princess theme discouraged young boys from seeing it. In an attempt to market the film to a broader audience, Disney changed the title of the film from Rapunzel to Tangled, and promoted it as a comedic adventure. An early trailer for the film focused less on Princess Rapunzel and more on Flynn Rider, the male lead character. It was originally believed that Disney's marketing campaign was a desperate attempt to search for a particular audience. However, Byron Howard and Nathan Greno, claimed that the title change was to emphasize that Flynn has as much of a role in the film as Rapunzel.

This is the first animated Disney "princess" film to get a PG rating by the MPAA, the previous ones all being Rated G. 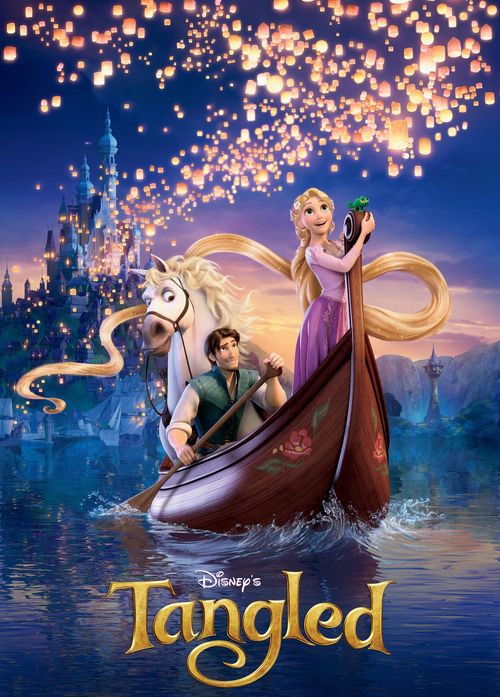