Cancel
They were five students with nothing in common, faced with spending a Saturday detention together in their high school library. At 7 a.m., they had nothing to say, but by 4 p.m., they had bared their souls to each other and become good friends. To the outside world they were simply a Brain, an Athlete, a Basket Case, a Princess, and a Criminal, but to each other, they would always be the Breakfast Club.
See Storyline (May Contain Spoilers)

On March 24, 1984, five students—"criminal" John Bender, "athlete" Andrew Clark, "brain" Brian Johnson, "basket case" Allison Reynolds, and "princess" Claire Standish—report for Saturday morning detention at Shermer High School in the Chicago suburb of Shermer, Illinois. While not complete strangers, each of them comes from a different clique, and they seem to have nothing in common. They gather in the high school library, where they are instructed by the assistant principal, Richard Vernon, not to speak, move from their seats, or sleep for a period of eight hours, fifty-four minutes (from 7:06 a.m. to 4 p.m.). He assigns a 1,000-word essay to the students in which each must write about who he or she thinks he or she is. He then leaves, returning only occasionally to check on them. Bender, who has a particularly antagonistic relationship with Vernon, ignores the rules and frequently riles up the other students, teasing Brian and Andrew and harassing Claire. Allison is initially quiet except for the occasional random outburst.

The students pass the hours by arguing and smoking marijuana that Bender retrieves from his locker. Gradually, they open up to each other and reveal their deepest personal secrets: Allison is a compulsive liar, Andrew can't think for himself, John comes from a troubled household, Brian has contemplated suicide due to a bad grade, and Claire is a virgin who feels constant pressure from her friends. They also discover that they all have strained relationships with their parents; Alison's parents ignore her, Andrew's father forces him into sports, John's dad abuses him, Brian's parents put immense pressure on him to get good grades, and Claire's divorced parents use her to get back at each other. They fear making the same mistakes as the adults around them. The students realize that despite their differences, they face similar pressures and complications in their lives.

Towards the end of the day, the other students ask Brian to write the essay that Vernon assigned earlier. Brian does so, but instead of writing about the assigned topic, he writes a letter objecting to Vernon's request to describe who they are, stating that the man has already judged who they are (an athlete, a basket case, a princess, a brain, and a criminal), and that he will not accept any different accounts from them. Brian finishes the essay and leaves it at the table for Vernon to read after they leave. Before the students part ways outside the school, Allison and Andrew kiss, as do Claire and John; Claire gives John one of her diamond earrings as a parting gift. Brian then finishes the narration by signing it as "The Breakfast Club" as the movie ends with John raising his fist up in triumph as he leaves for home. Despite the formed friendships and relationships, whether or not the students returned to their different cliques and never spoke again or remained friends, is unclear.

Tagline: They only met once, but it changed their lives forever.

Based on 0 rating
0 user 0 critic
Did you know? Claire's entire ensemble was purchased from a Ralph Lauren store, the only one which was present in Chicago at that time Read More
0 User Reviews
No reviews available. Click here to add a review.
Cast

Character Error
In the opening sequence of the movie, there will be a newspaper with a wrestling article featuring Andrew "Clarke". In the end credits, Andy's last name is spelled as "Clark".

Continuity
In a scene, when they are having lunch the cans of Coca-Colas are changed in between Coca-Cola Classic and "New" Coke.

Continuity
During the discussion in the Club, Claire's hairstyle changes back and forth from one shot to an another.

Continuity
When the principal and Carl are talking in the filing room, the label card on the file drawer is slanted up in the sideways. It is perfectly down in the next shot, then switched back to up and slanted.

Continuity
Pimples on Claire's chin appear and disappear throughout the movie.

Continuity
After Claire puts on her lipstick, she puts the cap on and keeps it inside her purse. In the next shot, it will be seen in her hand again, and then she puts it away for the second time.
Trivia:
John Hughes took only two days to write the screenplay for The Breakfast Club.

They used Parmesan Cheese to create snowflakes in the pencil drawing which Allison drew.

The coke cans that the teenagers drink from have the Olympic sign to represent the 1984 Olympics in Los Angeles.

The Breakfast Club was ranked #1 for Entertainment Weekly's Best High School Movies in 2006.

Claire's entire ensemble was purchased from a Ralph Lauren store, the only one which was present in Chicago at that time

The marijuana, the actors smokes in the film was actually oregano.

Director John Hughes actually attended Glenbrook North High School, one of the schools where the movie was filmed.

The other proposed titles were "The Lunch Bunch" and "Library Revolution". 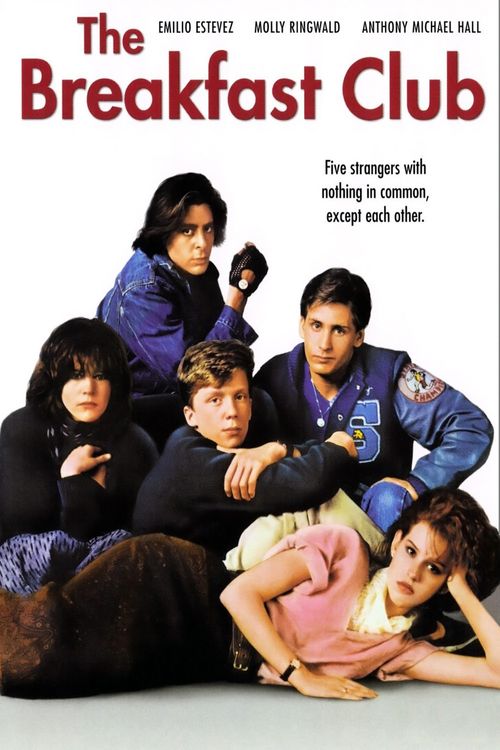 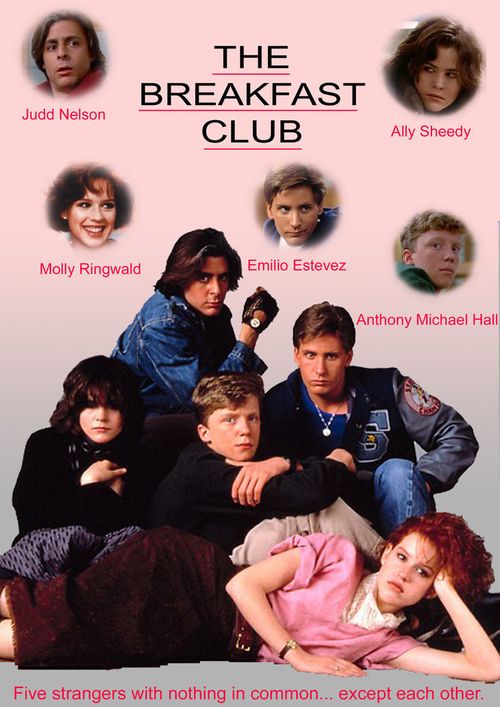