Cancel
Barney Ross is approached by CIA man Church, who wants him and his guns for hire to go to the former Soviet Union to retrieve something that was on a plane that crashed. Church doesn't tell him what he is getting. And Church sends a woman, Maggie with him to make sure he gets it. They find the plane and get the thing but some men take one of Barney's people hostage and the leader tells him to give him what they got or he'll kill his hostage. The give it to him but he kills his hostage anyway. Barney asks Maggie what was so important about that thing. She says that it showed the location of a Russian plutonium storage mine. Barney decides to track the man down and deal with him. They track them down and discover that the man they seek is Vilain who leads a group known as The Sangs and that they have taken all the men from the surrounding villages to work the mine.

Tagline: Back for War.

Based on 0 rating
0 user 0 critic
Did you know? The sequel was considered months before The Expendables (2010) was completed and released in theaters. The first movie's plot was revised during filming so that Dolph Lundgren's character, who was killed in the first draft, could be saved for the sequel. Read More
0 User Reviews
No reviews available. Click here to add a review.
Cast

Audio/Video Mismatch
After Barney meets Maggie for the first time under the bridge and starts his motorcycle, you hear the engine rev up before Barnie even touches the throttle.

Audio/Video Mismatch
When Christmas is dressed as a monk he says something in Latin, but his mouth never moves.

Character Error
Phosphate rock does not have a density of 1.52 or a melting point of 44°C, as stated by Gunner.

Continuity
When Booker is approaching Barney and his crew for the first time, Booker stops in front of Barney, in the next shot Booker comes to a stop a second time.

Continuity
After the bar scene at the beginning of the movie, Barney is seen riding off on his motorcycle. The license plate of his motorcycle is showing on the left side of the rear wheel in the first shot and then on the right side in the next shot to be shown on the left side again upon arrival at this destination.

Continuity
When the team and the miners escape the mine near the end of the movie, everyone is seen leaving the mine with clean faces and clothing.

Crew/Equipment Visible
During the shootout scene between Vilain and Ross towards the end of the movie, you can clearly see that Barney is wearing ear protection while he is taking cover from the bullets.

Errors in Geography
At the beginning of the film, the location is stated as Distretto di Sindhupalchok, Nepal, however, signs written in Burmese can be seen.

Factual Mistake
During the opening scene the bad guys are actually speaking Thai even though they are supposed to be Nepalese. Also the sub-titles don't actually match what they are saying.

Factual Mistake
Plutonium is about 20 times heavier than water, so the Plutonium bricks would weigh about 100 kilograms each. It would be impossible for one person to move that much weight as is displayed in the movie.

Factual Mistake
The Canadair CL-215 does not have a rear access door like the C-130, so the sea scooters couldn't enter the plane from the rear.

Factual Mistake
The guys are seen zip-lining down on a high voltage power line. This could never be possible, as on every pylon, the wire is anchored to an insulator. Even considering the fact that the power was turned off, they could have only zip-lined between two pylons.

Revealing Mistakes
When the expendables come across the wrecked aircraft, it is obvious that it is there due to having crashed. The engines are missing, which would be likely in a real crash, however it is obvious that the engine was removed by unbolting it, and not by crash forces. This is evident from the intact bolts and hoses shown forward of the engine firewall.

Revealing Mistakes
When the Canadair CL-215 takes off from the water through the smoke after the hostage rescue, there is no wing or prop vortex created in the smoke as the airplane flies through.
Trivia:
The fountain pen that Barney Ross pulls out to write on the napkin is a Montegrappa Chaos limited edition pen that Sylvester Stallone, a long time Montegrappa aficionado, helped design. It includes a skull and other symbols inspired by The Expendables (2010).

Sylvester Stallone explained that his casting was looking particularly for actors who had not experienced recent hits: "I like using people that had a moment and then maybe have fallen on some hard times and give them another shot. I like those kinds of guys. Someone did it for me and I like to see if I can do it for them."

Sylvester Stallone canceled his promotional tour for this film after his son Sage Stallone was found dead July 13th, 2012.

A stuntman died and another was left in a critical condition while filming an action scene for the movie in Bulgaria, that included an explosion on a rubber boat.

Tennis player Novak Djokovic filmed a cameo for the airport shootout for free. However, his scene was cut, which involves him attacking terrorists with his racket.

The sequel was considered months before The Expendables (2010) was completed and released in theaters. The first movie's plot was revised during filming so that Dolph Lundgren's character, who was killed in the first draft, could be saved for the sequel.

A real railway bridge over the river Osam in Bulgaria was built for the film, and will remain as part of the railway network.

Liam Hemsworth was originally cast in The Expendables (2010) but when the script was re-written, his role was cut out. He later got a call from Sylvester Stallone to be in this movie.

In the battle scene with all the expendables and the Sangs there are many tongue-in-cheek references to the actors other films such as Arnold Schwarzenegger saying I'll be back (terminator) and yip-pie Kay yay ( in reference to Bruce Willis's die hard series) and also Bruce Willis's asking who's next Rambo? (stylone's film)

In September 2011 Sylvester Stallone confirmed that he was in talks with Nicolas Cage and John Travolta about roles in the film and that scheduling would be the only obstacle to their involvement.

In November 2010, Charlie Sheen was considered for the role of a CIAgent hunting down Church. The role was eventually written out of the script. 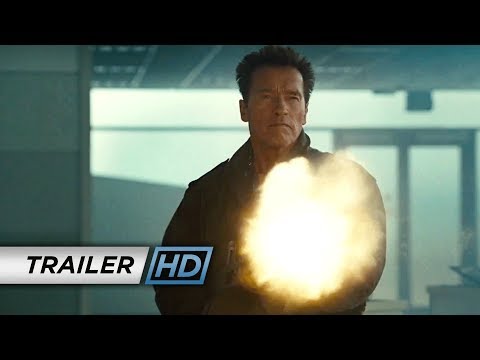 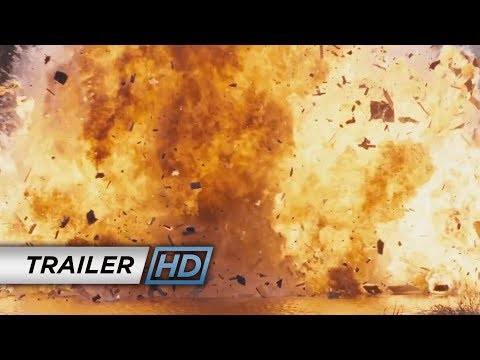 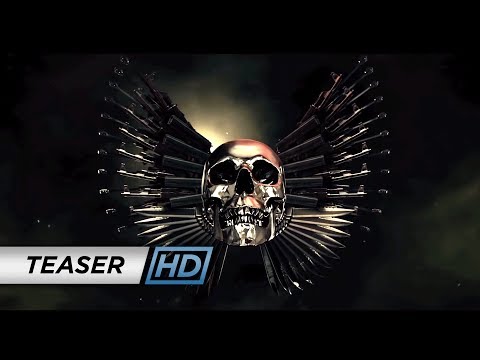 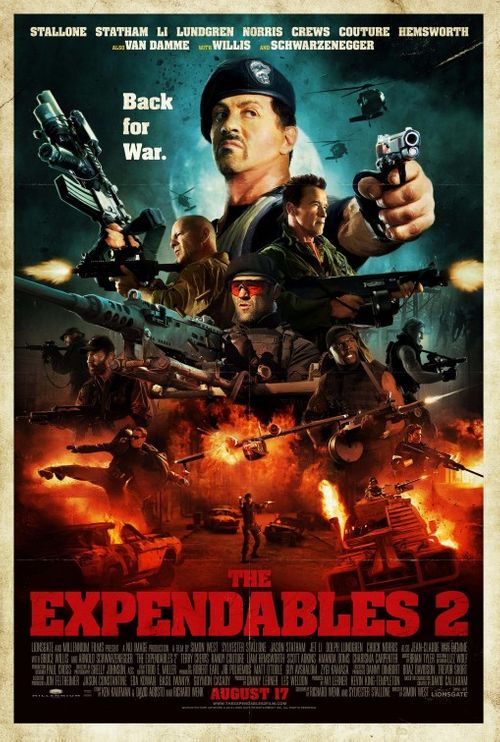 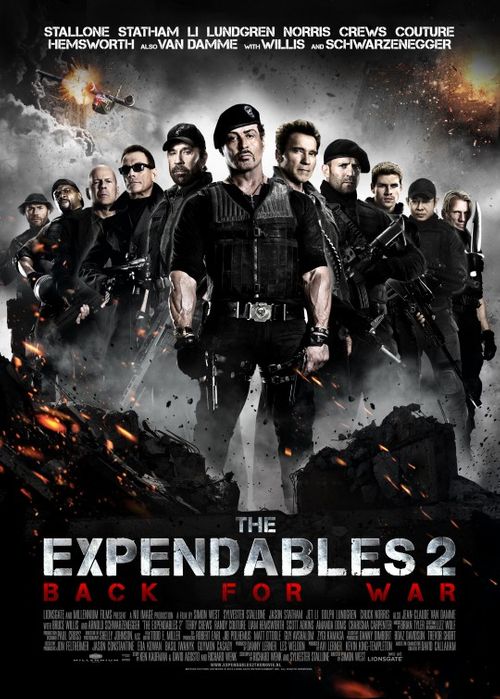 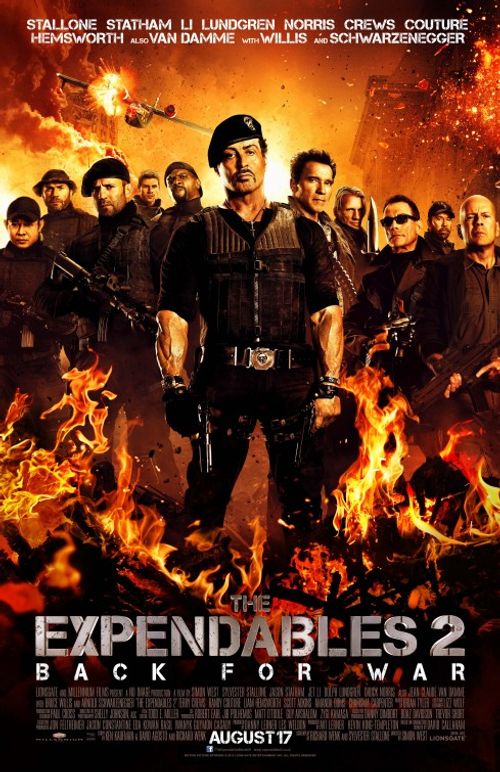 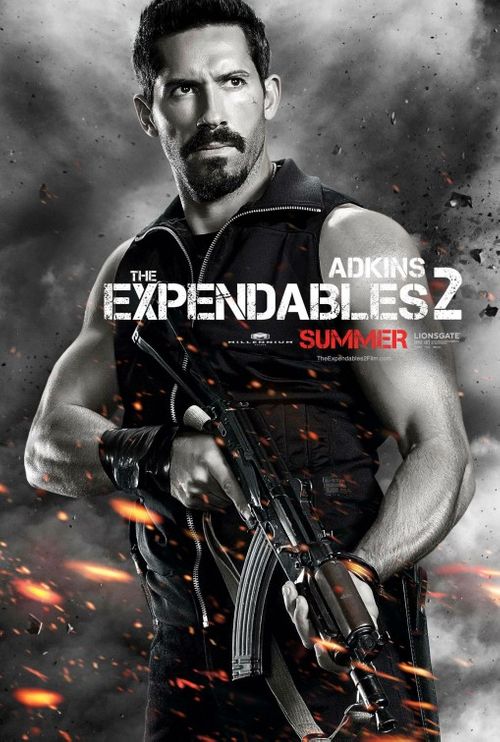 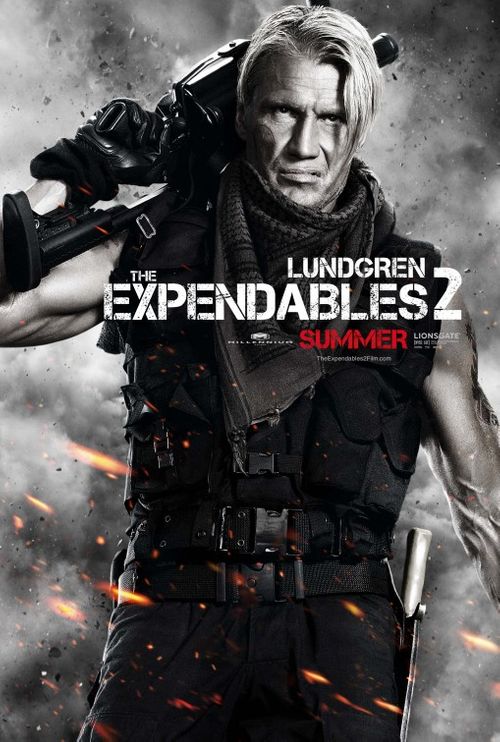 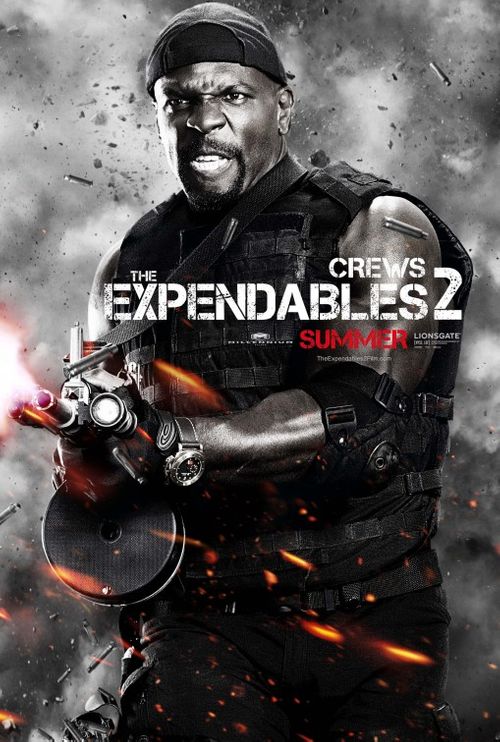 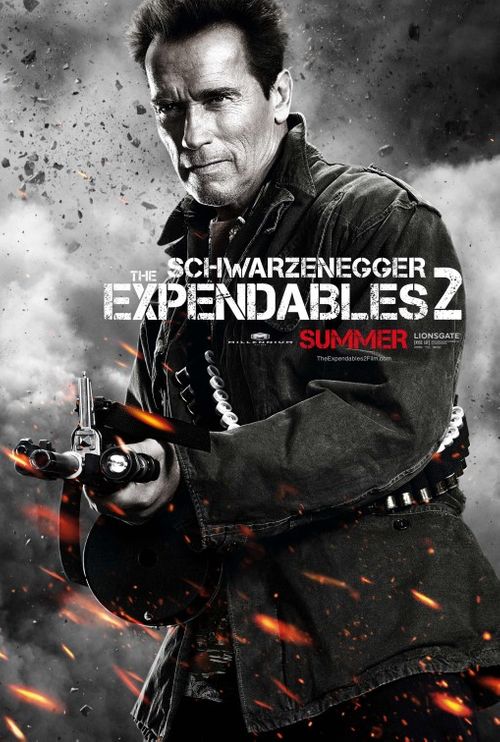 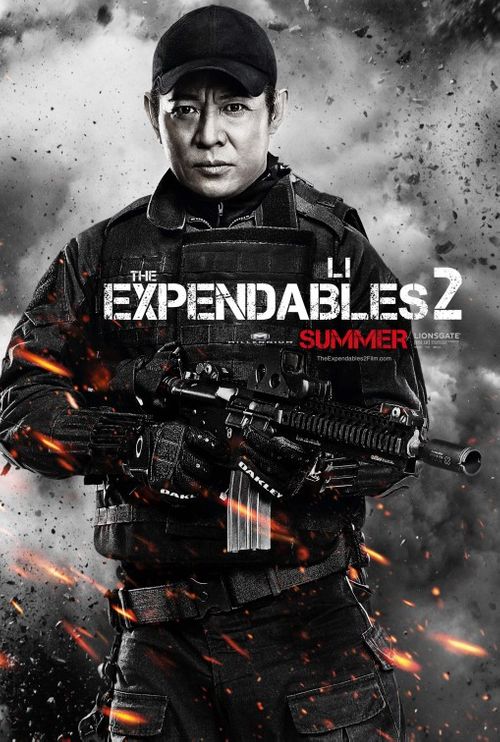 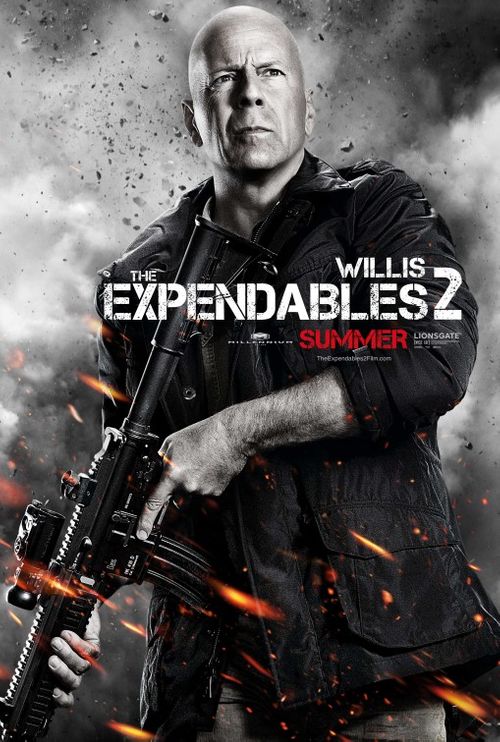 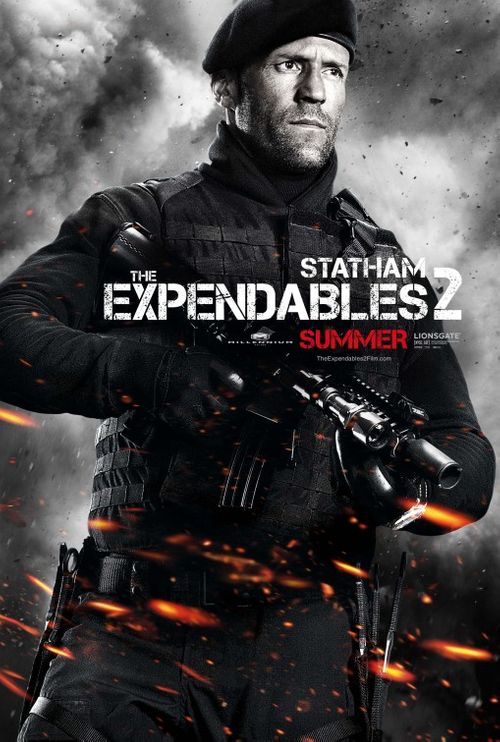 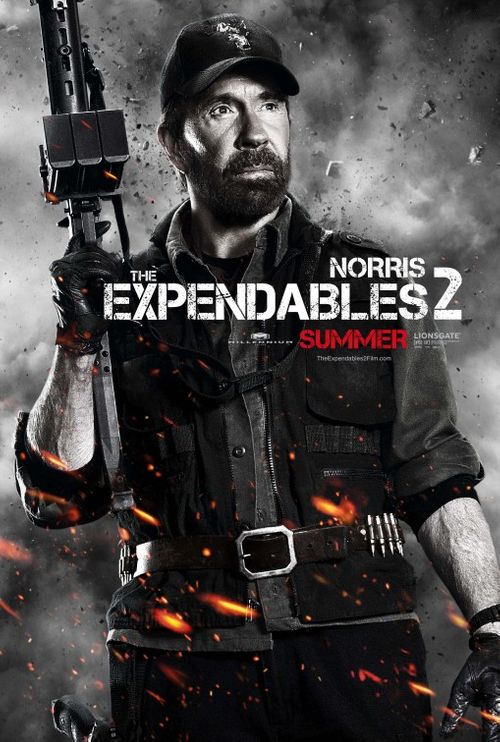 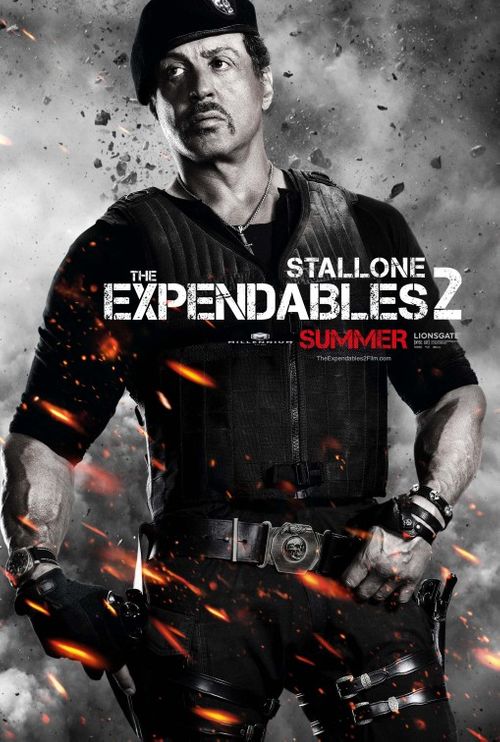 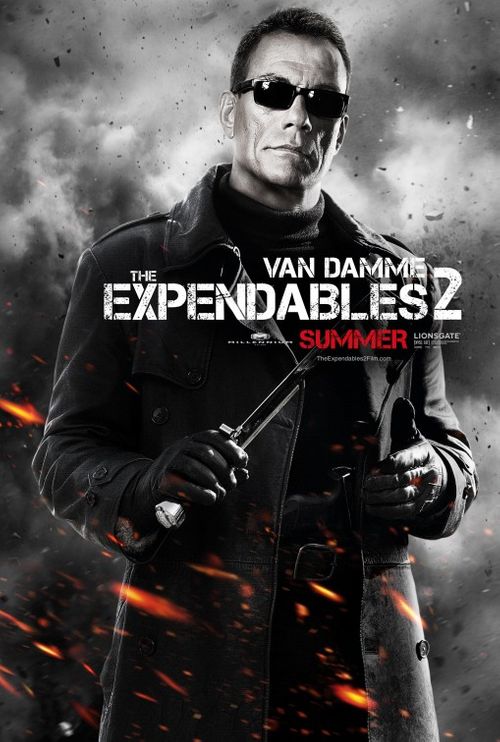 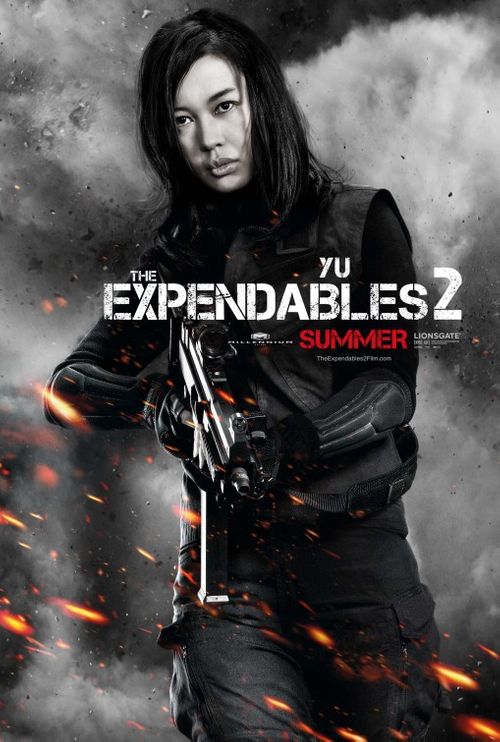 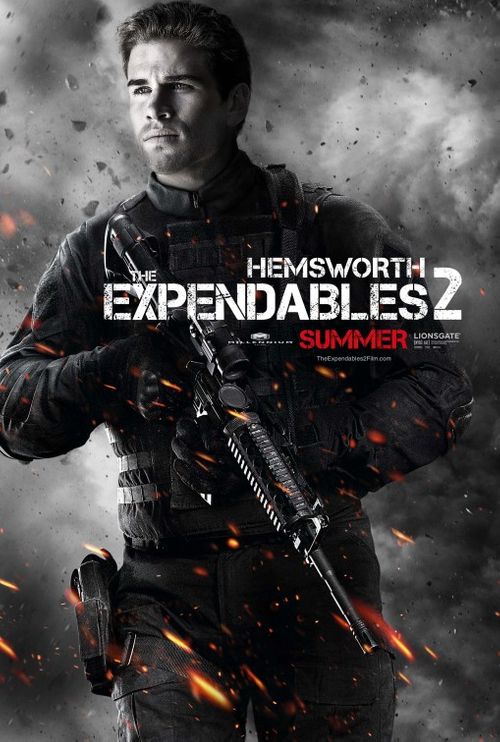 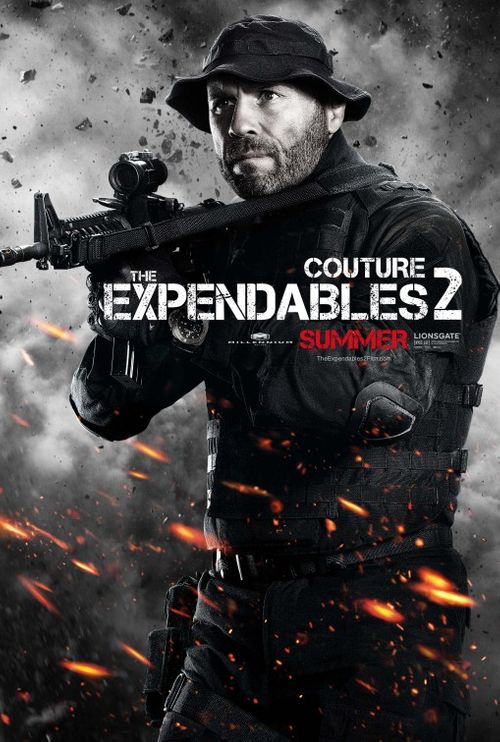 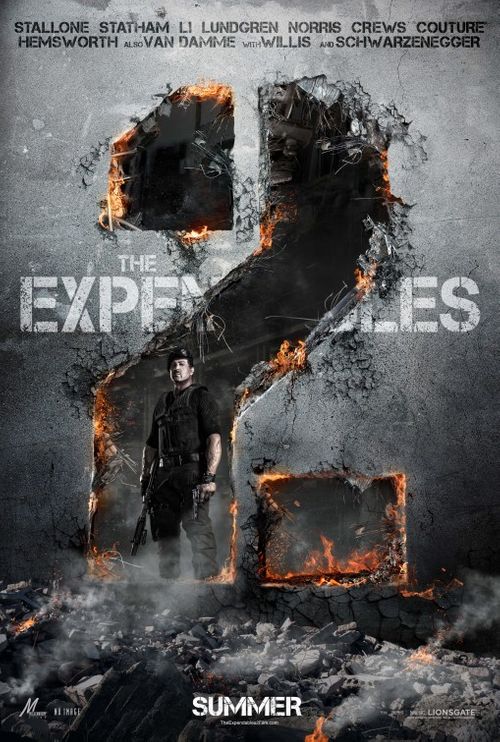