Cancel
In the twenty-third century, the universe is threatened by evil. The only hope for mankind is the Fifth Element, who comes to Earth every five thousand years to protect the humans with four stones of the four elements: fire, water, Earth and air. A Mondoshawan spacecraft is bringing The Fifth Element back to Earth but it is destroyed by the evil Mangalores. However, a team of scientists use the DNA of the remains of the Fifth Element to rebuild the perfect being called Leeloo. She escapes from the laboratory and stumbles upon the taxi driver and former elite commando major Korben Dallas that helps her to escape from the police. Leeloo tells him that she must meet Father Vito Cornelius to accomplish her mission. Meanwhile, the Evil uses the greedy and cruel Jean-Baptiste Emanuel Zorg and a team of mercenary Mangalores to retrieve the stones and avoid the protection of Leeloo. But the skilled Korben Dallas has fallen in love with Leeloo and decides to help her to retrieve the stones.
See Storyline (May Contain Spoilers)

In 1914, aliens known as Mondoshawans arrive at an ancient Egyptian temple to collect the only weapon capable of defeating a Great Evil that appears every 5,000 years. It consists of four stones, representing the four classical elements, and a sarcophagus containing a fifth element in the form of a human, which combines the power of the other four elements into a Divine Light capable of defeating the evil. The Mondoshawans promise their contact, a priest, that they will return with the element stones in time to stop the Great Evil, which will return in three centuries.

In 2263, the Great Evil appears in space in the form of a giant ball of black fire and destroys an attacking Earth spaceship. The current Mondoshawan contact, priest Vito Cornelius (Ian Holm), informs the President of Earth (Tom Lister, Jr.) of the history of the Great Evil and the weapon that can stop it. As the Mondoshawans return to Earth they are ambushed by Mangalores, a race hired by the industrialist Jean-Baptiste Emanuel Zorg (Gary Oldman), who has been instructed by the Great Evil to acquire the stones.

The Mondoshawan's spacecraft is destroyed, though the stones are not onboard; the only item to be recovered is a hand of the fifth element. Scientists take it to a New York City laboratory and use it to re-construct a humanoid woman known as Leeloo (Milla Jovovich). Terrified of her unfamiliar surroundings, she escapes confinement and jumps off a ledge to land in the flying taxicab of Korben Dallas (Bruce Willis), a divorcee and former major in the special forces.

Dallas delivers Leeloo to Cornelius and his apprentice, David (Charlie Creed-Miles), whereupon Cornelius learns that the Mondoshawans entrusted the four element stones to the alien Diva Plavalaguna (Maïwenn Le Besco), an opera singer. Zorg kills the Mangalores because of their failure to obtain the stones, but their compatriots determine to seize them for themselves. Upon learning from the Mondoshawans that the stones are in Plavalaguna's possession, General Munro (Brion James), Dallas' former superior, re-enlists Dallas and orders him to travel undercover, as a rigged radio contest winner, to meet Plavalaguna on a luxury cruise. The publicity surrounding the contest attracts the Mangalores and Zorg. Dallas takes Leeloo with him, while Cornelius instructs David to prepare the ancient temple designed to house the stones, before stowing away on the space plane transporting Dallas to the cruise liner.

Plavalaguna is killed when the Mangalores attack the ship, but Dallas succeeds in retrieving the stones. During the struggle with the Mangalores he kills their leader. After shooting and seriously wounding Leeloo, Zorg finds a carrying case that he assumes contains the stones, which he takes back to his spacecraft, leaving behind a time bomb that forces the liner's occupants to evacuate. Discovering the case to be empty, Zorg returns to the ship and deactivates his bomb, but a dying Mangalore sets off his own device, destroying the ship and killing Zorg. Dallas, Cornelius, Leeloo, and talk-show host Ruby Rhod (Chris Tucker) escape with the stones aboard Zorg's spacecraft.

The four return to the weapon chamber at the Egyptian temple as the Great Evil approaches. They activate the stones, but Leeloo has become disenchanted with humanity and refuses to release the Divine Light. Dallas confesses his love for Leeloo and kisses her. In response, Leeloo combines the power of the stones and releases the Divine Light, causing the Great Evil to become dormant as a new moon in Earth's orbit.

Earth scientists assure the president that the Great Evil is dead. Dallas and Leeloo are placed together in a healing tank to recuperate. When the President arrives and demands to see them, the scientists express reluctance, as Dallas and Leeloo have begun consummating their love.

Based on 0 rating
0 user 0 critic
Did you know? At that time US$80 million, the special-effects budget of the film was the highest. Read More
0 User Reviews
No reviews available. Click here to add a review.
Cast

Continuity
After Rhuby Rhod's first broadcast in the airport interior scene, the commercial audio for the Gemini Crocket Contest runs in the background. Since Korben has already won, there is no need to keep running this commercial.

Continuity
When they arrive at the temple Cornelius holds up a stone with the lines going across the bottom of it, Korben takes it, later in the next shot, he is holding a stone with lines running up it.

Crew/Equipment Visible
When Korben gets into the cab and he opens the "garage door" in the reflection you can see a grilled light being held by a crewman's hand.

Revealing Mistakes
At the start of the movie, right before Leeloo punches through the glass that is supposed to be "unbreakable", you can see that the glass is already cracked and ready to be broken.

Revealing Mistakes
When Right Arm explodes in the terminal and the smoke clears, he is still standing in the same place in the same position completely unaffected.

Revealing Mistakes
In Plavalaguna's performance, the seams on her prosthetic headpiece are clearly visible in profile shots.
Trivia:
Bruce Willis and Gary Oldman never had any communication, in fact, they were unaware of each other's degree of involvement.

Originally Luc Besson wrote the real screenplay when he was in high school.

The explosion in the Fhloston main hall was the largest indoor explosion ever filmed, which resulted fire almost got beyond control.

During that period this was the most expensive film ever produced outside of Hollywood.

The crowd found in the roofs, decks, and windows during the visual effects sequences in New York are the artists and employees at Digital Domain who worked on the film.

Earlier Elizabeth Berkley auditioned for the role of Leeloo, but after the failure of Showgirls (1995), studios were reluctant to hire her.

At that time US$80 million, the special-effects budget of the film was the highest.

Ruby Rhod was not the original name for Chris Tucker's character, it was Loc Rhod.

All of the Mondoshawan suits were destroyed after production. Whereas, one of the surviving suits now belongs to Nick Dudman. 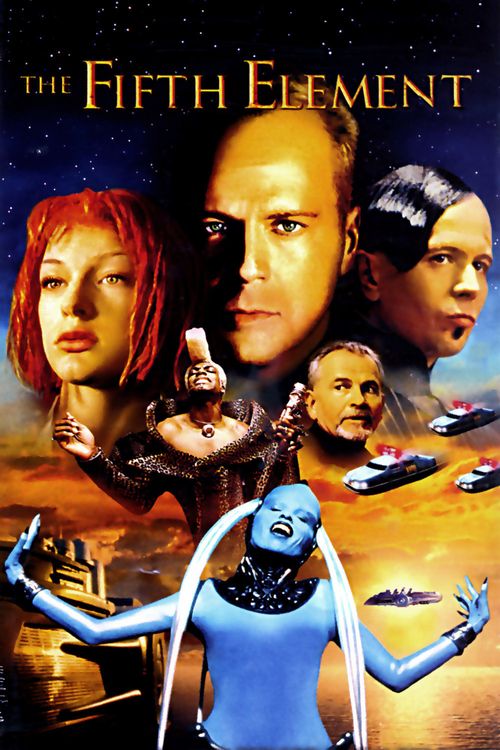