Cancel
Based on Wes Craven's 1977 suspenseful cult classic, this horror movie explicitly brings to life the story of a family road trip that goes terrifyingly awry when the travelers become stranded in a government atomic zone. Miles from nowhere, the Carter family soon realizes the seemingly uninhabited wasteland is actually the breeding ground of a blood-thirsty mutant family, and they are the prey.

Tagline: The lucky ones die first.

Based on 0 rating
0 user 0 critic
Did you know? Due to gruesome violence, about 2 minutes had to be cut to achieve the R rating. Read More
0 User Reviews
No reviews available. Click here to add a review.
Cast

Revealing Mistakes
As Bobby and Brenda are loading the bodies into the van, Lynne can be seen breathing.

Revealing Mistakes
The clear fluid poured onto the tire changes into a cinematographic "burn gel" just before Brenda lights it.

Revealing Mistakes
Although he is totally grungy in the scene where he is looking at the human ear in the Styrofoam container, the gas station attendant's fingernails are neatly manicured.

Errors in Geography
When Doug enters the house and takes the baby, Big Momma is watching Divorce Court. The picture is crystal clear, which is highly unlikely because there was certainly no cable in this area, and a broadcast signal, if it could even be picked up, would likely be of extremely poor quality due to the mountains. These mountains also block the family's radio transmissions.

Crew/Equipment Visible
At the beginning of the movie, after the title sequence and during a long crane shot toward the gas station, the film crew can be seen in a reflection on the green car's windows.

Crew/Equipment Visible
When Doug stands at the edge of the enormous blast crater, a shadow falls along his arm, but there is nothing near him that could have caused this.

Crew/Equipment Visible
When Doug sees Catherine lying on the bed in Big Mama's house in the village, she begins to roll over, and we can see a hand reach up to stop her from rolling from the bed.

Factual Mistake
Signs on a chain-link fence and in the model town state that the area is managed by the U.S. Department of Energy, which was not established until October 1977. In fact, the U.S. stopped atmospheric tests of nuclear weapons in 1962, when the area would have been managed by the Department of Defense.

Character Error
The father asks for directions to Interstate 88. They are a long way off being they are supposedly in California when I88 is located in both the greater Chicagoland area and upstate New York.

Continuity
The position of the ketchup, mustard, and drink pitcher on the table outside the trailer changes between shots.

Continuity
When Bobby is lying down in the trailer, he checks his watch at 11:49 PM and the gun can be seen behind him perfectly parallel with the ledge. He then hears Beast barking outside, gets up and reaches to grab the gun. The camera cuts to a close-up of the gun as Bobby grabs it, however it is now rotated 45 degrees between shots.

Continuity
After showing the tires on the truck getting completely punctured and deflating, in the next scene, just prior to hitting the big rock, the truck's tires are clearly still inflated.
Trivia:
Crew members from over 16 different nationalities worked on this movie, which was filmed in Morocco, while temperatures soared in excess of 120 degrees Fahrenheit on the Moroccan desert set.

The photos of mutations that play during the opening credits are not of atomic mutation, but birth defects caused by the use of Agent Orange in Vietnam.

The nuclear crater that Doug encounters was completely developed through computer graphics.

The gas station set was built on location in Morocco. It was so authentic that occasionally someone not involved in the production would stop to buy gas.

Due to gruesome violence, about 2 minutes had to be cut to achieve the R rating.

Almost all of Ted Levine's actions and lines were improvised.

Ivana Turchetto, who played Big Mama, agreed to have her head shaved for $1000.

Make-up artist Greg Nicotero was featured as Cyst, the mutant with the halo head-gear.

Wes Craven and producer Peter Locke originally wanted to film the new version in the exact same desert location as the 1977 film, but when they went out to scout the locations they found a number of condominium developments had been built. 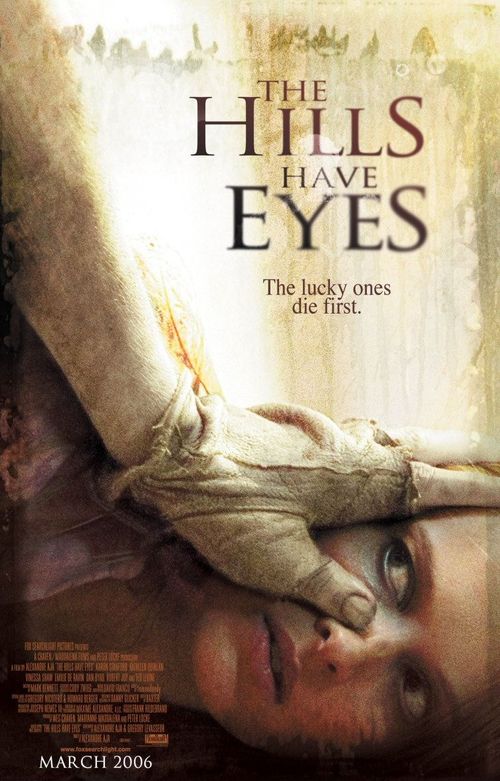