Cancel
Embedded soulful romance and fantastic mystery, this offbeat love story touchingly traces the evolution in the relationship between a frustrated architect living in 2004 and a lonely doctor living in 2006. The two meet via letters left in a mailbox at the lake house they have both lived in at separate points in time; they carry on correspondence over two years, remaining separated by their original difference of two years. For Alex the time goes from 2004 to 2006. For Kate the time goes from 2006 to 2008. What is the mysterious connection that has brought them together? They must try to unravel the mystery behind their extraordinary romance before it's too late.
See Storyline (May Contain Spoilers)

This offbeat fantasy romance sparks off in 2006, and centres around Dr. Kate Forster (Bullock) is leaving a lake house that she has been renting in Madison, Wisconsin to move to Chicago. Kate leaves a note in the mailbox for the next tenant to forward her letters should some slip through the system, further adding that the paint-embedded pawprints on the walkway leading into the house were already there when she arrived.

Two years earlier in 2004, Alex Wyler (Reeves), an architect, arrives at the lake house and finds Kate's letter in the mailbox. The house is neglected, with no sign of paw prints anywhere. During the house's restoration, a dog runs through Alex's paint and leaves fresh paw prints right where Kate said they would be. Baffled, Alex writes back, asking how Kate knew about the paw prints since the house was unoccupied until he arrived. On Valentine's Day 2006, Kate witnesses a traffic accident near Daley Plaza and tries to save the male victim, unsuccessfully. She impulsively drives back to the lake house, finds Alex's letter and writes back.

Both Alex and Kate continue passing messages to each other via the mailbox, and each watches its flag go up and down as the message leaves and the reply arrives as they wait at the mailbox. They cautiously look around each time the flag changes, hoping to somehow spot the other. It is in vain as they are alone at the mailbox. They then discover that they are living exactly two years apart.

Their correspondence takes them through several events, including Alex finding a book, Persuasion, at a train station where Kate said she had lost it, and Alex taking Kate on a walking tour of his favorite places in Chicago via an annotated map that he leaves in the mailbox. Alex eventually meets Kate at a party but he doesn't mention it in their letter relationship to her because she did not "know" him at that time. She did remember the meeting as a vague memory in the past.

For Alex, the meeting happened in the Present but for Kate, it had already taken place in the past without her knowing that it was Alex. As Alex and Kate continue to write each other, they decide to try to meet again. Alex makes a reservation at the Il Mare restaurant for around March 2007 — two years in Alex's future, but only a day away for Kate. Kate goes to the restaurant but Alex fails to show. Heartbroken, Kate asks Alex not to write her again, recounting the accident a year before. Both Alex and Kate leave the lake house, continuing on with their separate lives.

On Valentine's Day 2006 for Alex, Valentine's Day 2008 for Kate, Alex returns to the lake house after something about the day triggers a memory. Meanwhile, Kate goes to an architect to review renovation plans for a house she wants to buy.

A drawing of the lake house on the conference room wall catches her attention and upon asking, Henry Wyler informs her the artist was his brother, Alex, the man with whom she had been corresponding. She also learns that Alex was killed in a traffic accident exactly two years ago to the day and realizes why he never showed up for their date - he was the man who died in Daley Plaza.

Rushing to the lake house, Kate frantically writes a letter telling Alex she loves him, but begs him not to try to find her if he loves her back. Wait two years, she says, and come to the lake house instead. Meanwhile Alex has gone to Daley Plaza to find Kate.

At the lake house, Kate drops to her knees sobbing, fearing that she had arrived too late to stop Alex. After a long pause, the mailbox flag finally lowers; Alex has picked up her note. Not long afterwards, a familiar mint-green truck pulls up. She walks forward smiling as the driver, clad in jeans and a familiar tan jacket, approaches. She and Alex kiss and walk toward the lake house.

Tagline: How do you hold on to someone you've never met?

Based on 0 rating
0 user 0 critic
Did you know? First movie to be released simultaneously on DVD, HDDVD and Blu-ray Disc. Read More
0 User Reviews
No reviews available. Click here to add a review.
Cast

Miscellaneous
The taxicabs in the film have the same color license plates in 2004 and 2006, even though Illinois taxi license plates are reissued annually with different colors. The blue plates shown in the film are the 2005 series.

Audio/Video Mismatch
While looking through the pictures she says "...in the year 2004" but her mouth says 2002.

Audio/Video Mismatch
Mona's words at the job site, as she's talking to Alex in the beginning, don't match her mouth.

Character Error
When Alex catches up with his dog, Jack, at Morgan and Kate's house, Alex tells Morgan that Jack is a she, not a he. A few moments later, Alex's girlfriend, Mona, catches up with Alex and his dog. She says about the dog, "Oh, I see you found him."

Character Error
When Jack is finally caught, Alex clearly and loudly says "girl" when talking to the dog, but Morgan still refers to the dog as a male.

Continuity
When Alex shows his brother the lake house in 2004, he mentions that the house has no way to reach the water and that there should be a staircase so that you could go swimming. He adds the stairs himself later on. However, when Alex receives the book of his father's memoirs, he looks at a photo of his father and himself, a child, at the lake house. There are clearly stairs leading down to the water underneath the house, but the stairs did not exist until Alex added them in 2004.

Continuity
When we first see the lake house tree, the shape of the leaf is different from the leaf that is present in two years later. The first doesn't appear to be the same type of Maple.

Continuity
When Alex Wyler (Keanu Reeves) finds out that his dad is in the hospital he gets to the front desk to ask about his Dad's room. In that scene his sweat shirt was zipped up but when the attendant Anna Klyczynski (Shohreh Aghdashloo) realises he is the son of Simon Wyler ('Christopher Plummer') and comes round to talk to him his zipper is down.
Trivia:
Sandra Bullock states that she felt compelled to name the dog "Jack" after the character of Keanu Reeves in Speed (1994) - the first movie the two of them made together.

The actual house did not exist and was built for the movie, then dismantled. In using Google Earth to see the house, enter 41.7142, -87.8901 in the window on the Fly To tab. This will take you to the center of the lake. Zoom to the clearing on the eastern shore. Then select April 29, 2005 as the date.

Sandra Bullock revealed in an Entertainment Weekly interview that the title house had running water but no toilets.

The name of the exclusive restaurant in the film is "Il Mare". "Il Mare" is also the name of the house and the International title of the Korean film upon which "The Lake House" is based, Il Mare (2000).

The lake house measured 2000 square feet and sat on top of steel beams ten feet above the waterline. It used 35 tons of steel and required nearly 100 carpenters, welders and painters to build it.

The song featured at Kate's birthday party is "This Never Happened Before" by Paul McCartney. However, this song was released on his 2005 album Chaos and Creation in the Backyard, which at the time of her party (2004) had not yet been released.

The address of the building in Chicago at which Sandra Bullock lives is 1620 Racine. This would place it in the same block as the apartment belonging to Sean Connery in The Untouchables (1987) (Connery's character lived at 1634 Racine).

First movie to be released simultaneously on DVD, HDDVD and Blu-ray Disc.

John Cusack was the first choice for the role of Alex Wyler, but he declined.

The construction site that Reeves' character is working on is real. It is owned by Pulte Homes and is the Madison Park Community in Aurora, Illinois.

The location of the lake house, on Maple Lake, is located in the same Forest Preserve and is approximately 1 kilometer away from the site of the world's first nuclear reactor, CP-1, which was constructed during World War II's Manhattan Project in the Forest Preserve.

It seems both Alex and Kate drive vehicles that are also two years apart: Alex's pickup looks like a 1966 Chevy and Kate's Mustang is apparently a 1968.

Simon Wyler's death date is listed as October 6, 2004. October 6 is also the birthday of Swiss architect Le Corbusier, one of the two architects mentioned as his influences when he designed the Lake House (the other is Frank Lloyd Wright). 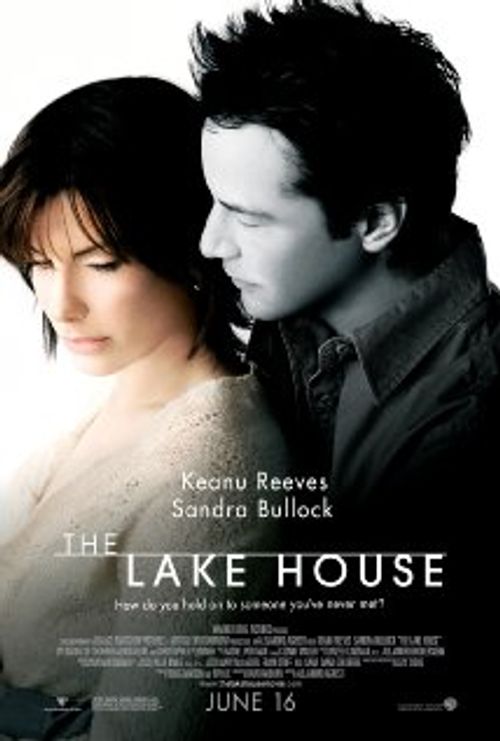