Cancel
This exquisitely crafted drama delves into the medium of theatre and the extraordinary demands it makes upon the artists who become exponents of this art form. This touching tale opens with filmmaker Siddharth Kumar receiving guests at his premiere 'The Mask' which stars Harish Mishra, Shabnam, amongst others. He finds out that Shabnam is not attending the premiere because she has gone to visit the ailing main actor of this movie, Harish, who was injured while filming. She sits with his mistress, Vandana, and Nurse Ivy, and recount Harish's life; his meeting with Journalist, Gautam, and subsequently Siddharth himself; the installation of a camera to view people walking on the street as well as males who urinate on the walls. As they await to hear the initial reviews of the film both Shabnam and Ivy must also deal with personal issues involving their respective spouses. Why is Harish in a coma? How will life pan out for each of these intertwined lives?
See Storyline (May Contain Spoilers)

This eloquent drama revolves around Harish Mishra (Amitabh Bachchan), a retired Shakespearean theatre actor who spent precisely thirty years and nine months on stage and then suddenly quit, and his first and last act as a cinema artist.

He is immensely passionate about Shakespeare, believes that nothing even comparable can ever be written, knows all his plays by heart, lives in those stories, condemns modern cinema and considers theatre as a much higher artform for directors and actors to convey their message to an audience.

It is Diwali, a time when box offices are flooded with new releases and Shabnam (Preity Zinta) has to attend the premiere of her latest movie: The Mask. However, she decides to visit her co-star Harish and heads to a cubbyhole of old Kolkata where Harish is bedridden in a coma. He is being taken care by Vandana (Shefali Shah) and a nurse, Ivy (Divya Dutta). Vandana treats Shabnam with spite as she blames her and the entire cast and crew for Harish's condition. But soon they are seen bonding over tea and are involved in a conversation about Harish. In flashbacks, their story and equation with Harish emerges.

The movie sees parallel narration from Goutam (Jishu Sengupta), a journalist who recalls his encounters with the veteran actor. He had suggested Harish for the lead role to his elder brother Siddharth (Arjun Rampal) who happens to be an ambitious perfectionist director.

After a casual meeting with Harish, Siddharth realizes that to convince Harish to act in his film, he has to win his trust and establish a relationship with him. And, hence, the impatient young auteur attempts to win the trust and collaboration of the aged performer, who sits raging against the modern world from the sanctuary of his study.

Harish finally agrees to act in the film. Shooting happens on the stunning Himalayan foothills of Mussoorie. On the sets he befriends Shabnam and teaches her lessons on acting, life and Shakespeare. As the story unfolds one gets to know his relationship with Vandana, the reason behind his quitting theatre and last but not the least the reason for his illness. The Last Lear becomes a captivating reflection on the comparative artifices of stagecraft and cinema.

Based on 0 rating
0 user 0 critic
Did you know? The story of this movie is based on the script of Utpal Dutt's semi-autobiographical play 'Aajker Shahjahan', Read More
0 User Reviews
No reviews available. Click here to add a review.
Cast

Most of the shooting for this movie took place in Kolkata and Mussoorie, Uttarakhand.

The story of this movie is based on the script of Utpal Dutt's semi-autobiographical play 'Aajker Shahjahan', 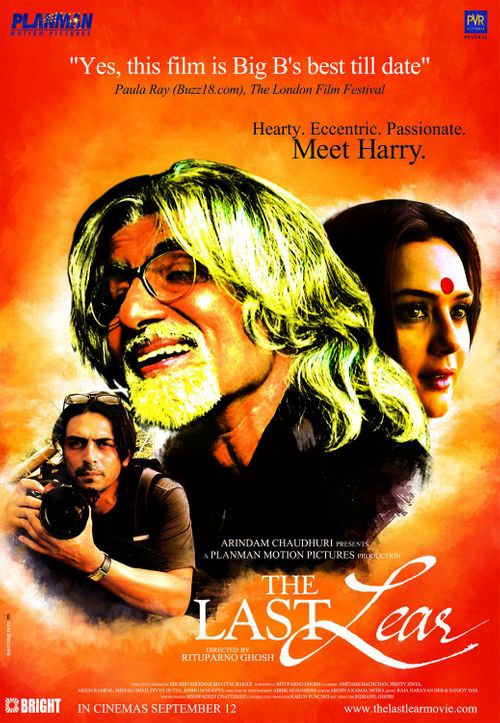