Cancel
In 1660, with the return of Charles II to the English throne, theater, the visual arts, science and sexual promiscuity flourish. Thirteen years later, in the midst of political and economical problems, Charles II asks for the return of his friend John Wilmot, aka the second Earl of Rochester, from exile back to London. John is a morally-corrupt drunkard and a sexually-active cynical poet. When the King asks John to prepare a play for the French ambassador so as to please him, John meets the aspiring actress Elizabeth Barry in the playhouse and decides to make her into a great star. He falls in love with her and she becomes his mistress. During the presentation to the Frenchman, he falls into disgrace with the court. As a consequence of his irreverent lifestyle, at just 33 years of age, he finds himself dying of syphilis and alcoholism. Will the vulnerability and pain of illness change his attitude towards life?
See Storyline (May Contain Spoilers)

This bold saga is set in the year 1660 and begins with John Wilmot, Second Earl of Rochester (Depp), delivering his prologue, the main themes of which are his fondness for drink, his sexual proclivities, and his disdain for his audience.

King Charles II (Malkovich) decides to summon his great friend, the Earl, back to London, retracting a year-long banishment for humiliating him, after only three month's exile. Rochester arrives in London to find his friends in a bawdy house; they are known as the "Merry Gang" and include George Etherege (Hollander) and Charles Sackville (Vegas).

On the street, Rochester comes across a thief, Alcock (Coyle), whose frankness about his dishonesty impresses Rochester. He hires Alcock as his gentleman on the spot. The Merry Gang introduce its newest member, 18-year-old Billy Downs (Friend). Rochester warns Downs, "Young man, you will die of this company."

Rochester invites Downs to attend a play with the Merry Gang, where they see actress Elizabeth Barry (Morton) getting booed off the stage and then refusing to participate in a curtain call. Rochester is taken with Barry, and secures her re-employment with the theatre company after she is initially fired.

Rochester invites Barry to meet him at the playhouse the next day to coach her in acting, and she hesitantly accepts. Barry's acting improves dramatically and she delivers a brilliant performance in her next production. The King then approaches Barry, asking her to spy on Rochester to keep track of his progress. A loyal subject, she agrees.

Charles, in need of money from France, asks Rochester to write a play in honour of the French Ambassador's visit. The King requests it be a "testament" to his reign. Rochester writes Sodom, or the Quintessence of Debauchery, a scathing satire of the King's reign, which he claims is indeed "a testament to Charles" — just what the King had asked for.

The play involves live sex acts, vulgar imagery, and a brutal portrayal of the King, played by Rochester himself. At the premiere, Charles coolly interrupts the play, coming up onto the stage to confront Rochester. Later, Downs is killed in a sword fight outside the home of a Constable; Rochester backs away from his dying friend, whispering, "I told you."

Hiding from the King in the English countryside and sick with symptoms of syphilis, Rochester peddles phony gynaecological "treatments" for women, including the selling of "potions" made from Alcock's urine. Rochester's face has become disfigured by syphillitic gummata, which he hides beneath a mask. Charles eventually tracks down Rochester, but decides that the worst punishment possible is to simply "let you be you."

Rochester returns to his wife, Elizabeth (Pike), admitting to having been constantly under the influence of "the drink" for five years straight. It becomes apparent that despite Rochester's health and infidelities, Elizabeth continues to love him.

Meanwhile, Charles' unpopular choice of heir, his Roman Catholic brother James, Duke of York, has led to a showdown with Parliament, which introduces the Exclusion Bill to deny James the throne. Rochester makes a dramatic entrance into Parliament, wearing a silver nose-piece and heavy pancake makeup to conceal the ravages of syphilis and hobbling on two canes.

He makes a brief but effective speech, rationally and eloquently denouncing the Bill. As Rochester then hobbles off, the subsequent vote kills the proposed Bill. He goes to see Barry, who reveals they had a daughter together, ironically named Elizabeth like his wife. She rejects him.

Rochester returns home to his deathbed, where he dies aged thirty-three with Elizabeth, his mother, a priest summoned to "bring God to him" as she did not want Rochester to die as an atheist, and Alcock.

Before he dies, Rochester asks the priest to recite from Book of Isaiah, chapter 53; he also asks his wife to retell the story of how he had abducted her as an 18 year old lady when they fell in love. The film then cuts between Rochester's actual death, and the death scene of The Man of Mode, the play about him written by his friend Etheridge. In a final irony, Elizabeth Barry is playing his wife on stage.

The film closes as it opens, with an epilogue. Rochester slips into the background in the wavering candlelight, sipping his drink and asking repeatedly, growing less arrogant and more vulnerable with each utterance: "Do you like me now?"

Tagline: He didn't resist temptation. He pursued it.

Based on 0 rating
0 user 0 critic
Did you know? Final film of costume designer Dien van Straalen and production designer Ben van Os. Van Os worked on Dark Blood (2012) which was released after The Libertine, but was made in 1993. Read More
0 User Reviews
No reviews available. Click here to add a review.
Cast

Revealing Mistakes
In several shots, the fake nose John Malkovich is wearing is noticeable, including the sun glowing through when outdoors, and when in the theater box speaking to Johnny Depp, there is a distinct color mismatch that shows the outline of the prosthetic.

Miscellaneous
When Rochester returns home, the carriage gets stuck in the mud so he gets out and walks towards the house. He's met by his wife. Rochester says, "Madam. This driveway will not do." The word "driveway" didn't come into use until around 1865 (according to dictionary.com) - about two hundred years after Rochester's death.

Miscellaneous
Looks closely at the back of the person being prodded and whipped around 1:17:10 (in Dr. Bendo's room shortly after Alcock pees into a vial), you can faintly see quite a large tattoo in the small of the lady's back that hasn't completely been covered by the make-up.

Character Error
The Earl of Rochester reads an insulting poem he wrote about Charles II which implies that the King is impotent, and insists this "is true." In fact, Charles II was a noted womanizer who fathered at least a dozen illegitimate children by seven mistresses.

Continuity
When the dog poops on the floor behind the king, the sunlight is shining brightly onto the floor. The camera cuts away to Chaffinch and when it returns to the king, there is no sunlight and the pile of dog poop has disappeared.

Continuity
When the King talks to Lizzie at the theater, her shoulders are alternately covered, then naked and covered again, without any visible cause.

Continuity
In the playhouse, after Harris announces the kings arrival, Lord Rochester starts to remove his hat with his right hand on the crown of the hat. In the next shot, he is removing it with his left hand on the brim of the hat.
Trivia:
John Malkovich had previously worked with Laurence Dunmore on a commercial, and loved working with him so much he recommended him to the producers.

Final film of costume designer Dien van Straalen and production designer Ben van Os. Van Os worked on Dark Blood (2012) which was released after The Libertine, but was made in 1993.

Laurence Dunmore operated the camera for almost every shot in the film.

A scene was deleted that included a kiss between Johnny Depp and Rupert Friend.

Based on the play by Stephen Jeffreys, which had been produced by the Steppenwolf Theatre Company and starred John Malkovich and Martha Plimpton.

The poem which Wilmot has been banished from court at the beginning of the film is "A Satyr on Charles II". The historical Wilmot really did submit that poem to the monarch accidentally, but he subsequently left court of his own accord, rather than at Charles' command.

Most of the film was lit using candles rather than conventional movie lights. In order to keep the effect of candles but still get enough light, cinematographer Alexander Melman designed a special piece of equipment, a stand that held a bank of candles and a reflective backing. These were known on the set as Birthday Cakes.

Unlike most period films, this one was shot almost entirely with a hand-held camera. The two most notable shots with a fixed camera (not a hand held one) are the two panoramas of the interior of the theater, which was intentional. 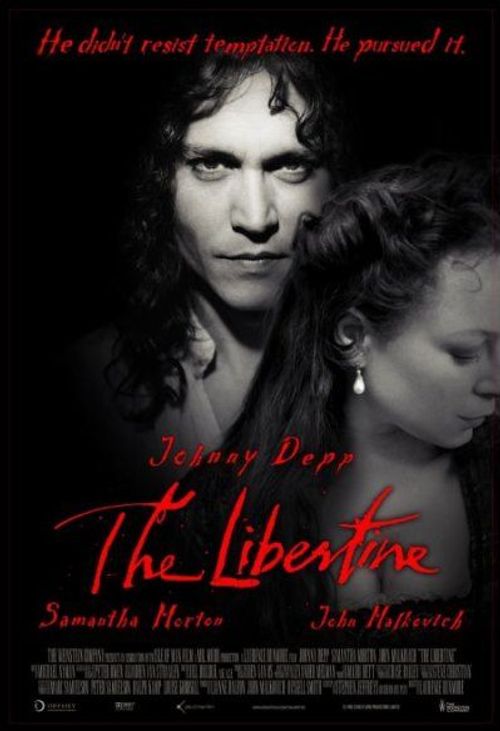