Cancel
This extraordinary, epic tale of friendship, bravery, sacrifice and honour begins with the discovery of an ancient Ring thought lost for centuries has been found, and through a strange twist in fate has been given to a small Hobbit named Frodo. When Gandalf discovers the Ring is in fact the One Ring of the Dark Lord Sauron, Frodo must make an epic quest to the Cracks of Doom in order to destroy it! However he does not go alone. He is joined by Gandalf, Legolas the elf, Gimli the Dwarf, Aragorn, Boromir and his three Hobbit friends Merry, Pippin and Samwise, who together form The Fellowship of the Ring. Through mountains, snow, darkness, forests, rivers and plains, facing evil and danger at every corner the Fellowship of the Ring must charge onwards towards the fiery pit where the ring was forged. Their quest to destroy the One Ring is the only hope for the end of the Dark Lords reign!
See Storyline (May Contain Spoilers)

This epic fantasy drama begins with a prologue, spoken by Galadriel, shows the Dark Lord Sauron forging the One Ring which he can use to conquer the lands of Middle-earth through his enslavement of the bearers of the Rings of Power powerful magical rings given to individuals from the races of Elves, Dwarves and Men.

A Last Alliance of Elves and Men is formed to counter Sauron and his forces at the foot of Mount Doom, but Sauron himself appears to kill Elendil, the High King of Arnor and Gondor, and Gil-galad, High King of the Noldor. After Elendil falls his son, Isildur, grabs his father's broken sword Narsil, and slashes at Sauron's hand. The stroke cuts off Sauron's fingers, separating him from the Ring and vanquishing his army.

Gandalf begs Isildur to throw the ring into the fires in which it was forged, but Isildur does not heed his pleas. So, despite his loss and the obliteration of his army because Sauron's life is bound in the Ring, he is not completely defeated until the Ring itself is destroyed. Isildur takes the Ring and succumbs to its temptation, refusing to destroy it, but he is later ambushed and killed by orcs and the Ring is lost in the River Anduin, into which Isildur fell.

The Ring is found two-and-a-half millennia later, and eventually it comes to the creature Gollum, who takes it underground for five centuries, giving Gollum "unnaturally long life." The Ring leaves him however, and is found by the hobbit Bilbo Baggins, much to the grief of Gollum. Bilbo returns to his home in the Shire with the Ring, and the story jumps forward in time sixty years.

At his 111th birthday, Bilbo leaves the Ring to his nephew and adopted heir Frodo Baggins. The Wizard Gandalf soon learns it is the One Ring, and sends him to Bree with Sam, with plans to meet him there after Gandalf goes to Isengard to meet the head of his order, Saruman. Saruman reveals that the Nazgûl, or Ringwraiths, have left Mordor to capture the Ring and kill whoever carries it; having already turned to Sauron's cause, he then imprisons Gandalf atop Orthanc.

Gandalf sees Saruman's ultimate plan; he has begun to destroy the forest surrounding Isengard for fuel to forge weapons for an army of large orcs, the Uruk-hai.

Frodo and Sam are soon joined by fellow hobbits Merry and Pippin. After encountering a Ringwraith on the road, they manage to reach Bree, and there they meet a Man called Strider, who agrees to lead them to Rivendell. They agree only because Gandalf isn't there to guide them.

After some travelling, they spend the night on the hill of Weathertop, where they are attacked by the Nazgûl at night. Strider fights off the Ringwraiths, but Frodo is grievously wounded with a morgul blade, and they must quickly get him to Rivendell for healing. While chased by the Nazgûl, Frodo is taken by the elf Arwen to the elvish haven of Rivendell, and healed by her father, Elrond.

In Rivendell Frodo meets Gandalf, who explains why he didn't meet them at Bree as planned. In the meantime, there are many meetings between various peoples, and Elrond calls a council to decide what should be done with the Ring. The Ring can only be destroyed by throwing it into the fires (that is, lava) of Mount Doom, where it was forged. Mount Doom is located in Mordor, near Sauron's fortress of Barad-dûr, and will be an incredibly dangerous journey.

Frodo volunteers to take the Ring to Mount Doom as all the others argue about who should or shouldn't take it. He is accompanied by his hobbit friends and Gandalf, as well as Strider, who is revealed to be Aragorn, the rightful heir to the throne of Gondor. Also travelling with them are the Elf Legolas, the Dwarf Gimli and Boromir, the son of the Steward of Gondor. Together they comprise the Fellowship of the Ring.

The Fellowship set out and try to pass the mountain Caradhras, but they are stopped by Saruman's wizardry. They are forced to travel under the mountain through the Mines of Moria. After journeying partway through the Mines, Pippin accidentally gives away their presence to a band of orcs. The Fellowship then encounter a Balrog, an ancient demon of fire and shadow, at the Bridge of Khazad-dûm. Gandalf confronts the Balrog on the bridge, allowing the others to escape the mines, while he falls with the creature into the abyss below.

The group flees to the elvish realm of Lothlórien, where they are sheltered by its rulers, Galadriel and her husband Celeborn. After resting, they decide to travel on the River Anduin towards Parth Galen. Before they leave, Galadriel gives Frodo the Phial of Galadriel. After landing at Parth Galen, Boromir tries to take the Ring from Frodo, who manages to escape by putting the Ring on his finger and vanishing.

Knowing that the Ring's temptation will be too strong for the Fellowship, Frodo decides to leave them and go to Mordor alone. Meanwhile, the rest of the Fellowship are attacked by Uruk-hai, larger and stronger orcs that can withstand sunlight. Merry and Pippin, realizing that Frodo is leaving, distract the orcs, allowing Frodo to escape.

Boromir rushes to the aid of the two hobbits but is mortally wounded by the orc commander Lurtz, and Merry and Pippin are captured. Aragorn, Legolas, and Gimli find Boromir, who regrets attempting to steal the Ring and dies. They decide to pursue the orcs and rescue the hobbits, leaving Frodo to his fate. Sam joins Frodo before he leaves, and together the two head to Mordor.

Tagline: All we have to decide is what to do with the time that we are given

Based on 0 rating
0 user 0 critic
Did you know? Orlando Bloom broke his rib in the process of doing his own stunts. Read More
0 User Reviews
No reviews available. Click here to add a review.
Cast

Makeup Artist
Davina Lamont
Margaret Aston
Nancy Hennah
Rick Findlater
Technical Details
Film Type:
Feature
Language:
Hindi
Spoken Languages:
English
Colour Info:
Color
Sound Mix:
Dolby Digital EX, Sony Dynamic Digital Sound
Frame Rate:
24 fps
Aspect Ratio:
2.35:1
Stereoscopy:
No
Fun Stuff
Taglines:
All we have to decide is what to do with the time that we are given
Power can be held in the smallest of things...
Even the smallest person can change the course of the future.
Middle Earth comes alive...
Fate Has Chosen Him. A Fellowship Will Protect Him. Evil Will Hunt Them.
You will find adventure, or adventure will find you.
One Ring To Rule Them All.
The Legend Comes to Life
Movie Connection(s):
Dubbed from: The Lord of the Rings: The Fellowship of the Ring (English)
Goofs:
Continuity
While talking to Bilbo, Gandalf's belt repeatedly switches between being tied and untied.

Continuity
During the battle at the tombs in Moria, Boromir's shield continuously disappears and reappears.

Continuity
Moments after Frodo saves Sam from drowning, his clothes are completely dry.

Revealing Mistakes
Frodo's cape is shown to be supported by a string to make it look flowing as he runs from the orcs.
Trivia:
Peter Jackson gifted both Elijah Wood and Andy Serkis one of the rings used in the movie. Both of them thought they had the only one.

Orlando Bloom broke his rib in the process of doing his own stunts.

Orlando Bloom landed the role of Legolas only two days before he finished drama school.

The initial cut ran for four hours and thirty minutes. 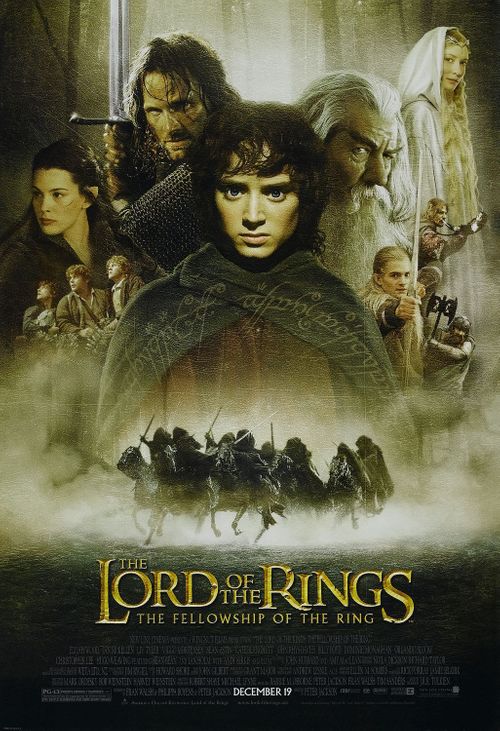 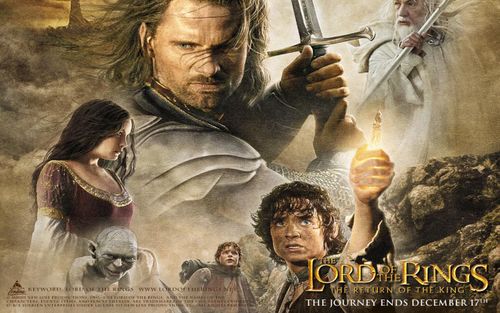