Cancel
Embedded with quirky comedy and soulful romance, this fast-paced tale traces the twists and turns in the life of Jerry Welbach an unlucky young man, who is stuck in a difficult situation with the mafia boss. To add to his woes, he is bombarded by two ultimatums. His mob boss wants him to travel to Mexico to get a priceless antique pistol called "The Mexican" or he will suffer the consequences. The other ultimatum comes from his girlfriend Samantha, who wants him to end his association with the mob. Jerry figures that being alive, although in trouble with his girlfriend is the better alternative so he heads south of the border. Finding the pistol is easy but getting it home is a whole other matter. The pistol supposedly carries a curse - a curse, Jerry is given every reason to believe, especially when Samantha is held hostage by the gay hit man Leroy, to ensure the safe return of the pistol. Will Jerry succeeded in escaping Mexico with The Mexican and his life intact?
See Storyline (May Contain Spoilers)

This offbeat romantic comedy follows Jerry Welbach (Brad Pitt) as he travels through Mexico to find a valuable antique gun, The Mexican, and smuggle it into the United States.

Five years earlier, Welbach had caused a traffic accident in which he hit the car of local mobster Arnold Margolese (Gene Hackman), who was jailed for five years after the police searched his car following the crash, finding someone tied up in his trunk.

In compensation for the jail time, Welbach has been sent on various errands by Margolese's second-in-command, Bernie Nayman (Bob Balaban). Retrieving the gun will be his final errand. Welbach has a girlfriend, Samantha (Julia Roberts), whom he argues with constantly and who leaves Jerry prior to the trip over his lack of commitment to their relationship.

Jerry arrives in Mexico and makes his way to pick up Beck (David Krumholtz), the Margolese employee now in possession of the gun. There, a drunken Beck tells Jerry about the gun's history as a suicide weapon used as part of a jilted love-triangle between a woman, a nobleman, and the son of the gunsmith who forged the weapon, as well as its curse to misfire. Jerry helps Beck to his car, only for the man to be killed by celebratory gunfire from a nearby festival.

Panicked but determined, Jerry buries the body and then calls Bernie to report on the situation, only for his vehicle to be stolen while he makes the call, the gun still inside. Jerry briefly has a uncooperative donkey as transportation to follow the thief, then buys an old, damaged truck. Meanwhile, Samantha gets kidnapped by a hit man named Leroy who tells her that Jerry hired him to make sure she is safe from anybody that wants her dead. It is then revealed that Leroy is gay, which doesn't bother Sam after they pick up a postal worker named Frank, who then has a relationship with Leroy.

Another hitman follows them to Las Vegas and kills Frank to make it look like a suicide. Leroy kills him in an act of vengeance, and flees with Sam. Jerry finds out that Ted, his friend and colleague, wanted to kill him and take the pistol to Margolese, but hesitated and ends up getting handcuffed to a pawnshop owner, after he received the gun from a policeman when Jerry was being interrogated for the bloodstain on the front passenger seat of his car. Jerry then finds out he accidentally grabbed Ted's Passport and tries to retrieve his own, but Ted has already fled. Jerry decides to pick up Sam and Leroy at the airport, where Leroy recognizes him, but Jerry doesn't recognize Leroy. Without a passport, Jerry is stuck in Mexico until further notice by the American Consulate.

After their car has a blowout, Jerry kills Leroy and finds out that he is one of Nayman's men named Winston Baldry, and that the real Leroy was the man Winston killed. Sam begins to realize that Leroy was not who he appeared to be when they first met. Jerry realizes that Nayman's plan was to make it look like Jerry double crossed Margolese. Shocked by this, Sam decides to go home, but also decides to stay with Jerry to see the situation to the end. Jerry gets assaulted and taken to Margolese who was released from prison a few days earlier. He tells Jerry that he didn't double cross him as it was Bernie who wanted to sell the pistol to the highest bidder.

A gunsmith, who is the great-grandson of the gunsmith from the story, wanted to bring the pistol back to where it belongs. He thanks Jerry for risking his life for the pistol he was going to give to his greedy boss. Sam gets kidnapped by Bernie in order to get the pistol from Margolese. After opening the trunk to his car, she pulls the gun on Bernie, blaming him for ruining her life, where it ends in a Mexican Standoff. Sam gets the upper hand and kills Bernie with the pistol he desperately needed. Jerry and Sam rekindle their romance and get married in Mexico, while Margolese finally gets his prize, as well as the gunsmith. The film ends with Jerry and Sam arguing over the story of The Mexican on their way to Vegas.

Tagline: love with the safety off

Based on 0 rating
0 user 0 critic
Did you know? In the scene where Gerry (Brad Pitt) is amusingly attempting to speak Spanish (widely spoken in Mexico) when saying to some men, "I need a lift in your El trucko to the next towno", there is also a reference to Robert De Niro. Pitt and De Niro co-starred in Sleepers (1996). Read More
0 User Reviews
No reviews available. Click here to add a review.
Cast

Audio/Video Mismatch
When Jerry initially retrieves his revolver from his luggage before going into the bar to find Beck, he opens the cylinder and a couple of cartridges fall out. In the process of reloading, he spins the cylinder and several clicks are audible. An open cylinder on this type of firearm would spin freely and would not click. (The clicks might be heard as part of the lockup mechanism if the cylinder was spun while closed.)

Continuity
In the bar where he meets Beck, Jerry orders tequila and takes a sip from the shot glass, leaving it a bit over half full. A moment later, just before the bartender drinks it, the shot glass is completely full.

Continuity
When Jerry confronts the men who stole his rental car, one of the men is wearing Jerry's purple sunglasses. Jerry gets irritated and takes them from him. However, before Jerry takes them back, there is a brief shot showing Jerry already wearing them.

Continuity
When Jerry is offered an American car at the Mexican car rental agency he expresses disappointment and is offered an "El Camino" by the rental agent. However, in the next scene we see that several workers draw to see who gets Jerry's business, insofar as to who will allow Jerry to rent their car, but only one of the cars is an El Camino - which in the previous scene was already rented to Jerry.

Continuity
When Jerry is drinking from a bottle of beer he puts it to the left of him on the bench. In another shot, just moments later, the bottle can be seen on the other side of the bench.

Continuity
When approaching the tractor/trailer around the 1.5 hour mark, for some reason the passenger door on the tractor is open, after passing the tractor the door can be seen to be closed in the rear view shot from the El Camino.

Continuity
When Jerry takes the pistol back from the man who stole the el Camino, you can see the rag the pistol's wrapped in fall to the ground when he puts the pistol in his pants pocket. The next cut shows the rag hanging from Jerry's pocket.

Crew/Equipment Visible
When Jerry and Sam are driving from the airport to the Mexican hotel towards the end of the film, parts of a camera are reflected in the car window.

Errors in Geography
Toluca City is a large industrial-urban city, 30 minutes by car from Mexico City. It is not a old rural town. Because of its closeness to Mexico City, no airline flies between the two cities.

Errors in Geography
When Leroy and Samantha leave the mall they drive on and on through the desert and end up in downtown Las Vegas at the Plaza Hotel. Maybe they just wanted to do a lot of driving, but in actuality the mall is on Las Vegas Blvd about 15 minutes driving on the strip to get up to the Plaza Hotel.

Miscellaneous
In the opening scene, the stop light is clearly red, yet cars are seen going through the light in all lanes.

Revealing Mistakes
The first time Jerry tucks his revolver beneath the dash of the El Camino (while Beck is relieving himself outside the bar), the orientation of the gun would indicate that the right side of the firearm is being shown to the audience; however, the cylinder release is clearly visible, indicating that this is actually the left side of the gun and the shot has been reversed. (Also note that he uses his right hand to stow the revolver but the orientation of the hand, especially the thumb, would indicate a left hand. This is further evidence of a flopped shot.)

Continuity
About two thirds into the movie, we see Sam and Winston (false Leroy) have breakfast at a diner after having partied in the hotel room the night before. Winston shares with Samantha, how his new lover, whom they picked up on the way, found out about what he does for a living by finding the gun that Winston hid before they had started to party. The night before, we see Winston slide the gun under the cushion of an armchair. However, when he tells Samantha that story, he talks about having hid the gun between towels in the bathroom.
Trivia:
It was on the set of this movie that Julia Roberts met her husband, cameraman Daniel Moder.

The apparently vicious "rabid dog" in the back of the truck is actually a Golden Retriever with its fur badly trimmed and dyed to look like a mutt.

James Gandolfini reportedly lost 35 pounds for his role as Winston, all of which he had to gain back before shooting re-commenced on the upcoming season of The Sopranos (1999) because producer David Chase believed that "The Sopranos" audience would not like a "skinny" Tony (Soprano).

Throughout the film, Jerry (and others) is seen to carry his handgun inside the front of the waistband but without a holster. Appropriate to the movie, this is known as "Mexican carry".

Despite the fact that this was filmed in Super 35, "Filmed in Panavision" is listed in the end credits.

In the scene where Gerry (Brad Pitt) is amusingly attempting to speak Spanish (widely spoken in Mexico) when saying to some men, "I need a lift in your El trucko to the next towno", there is also a reference to Robert De Niro. Pitt and De Niro co-starred in Sleepers (1996).

This was originally set to be a David Fincher project. 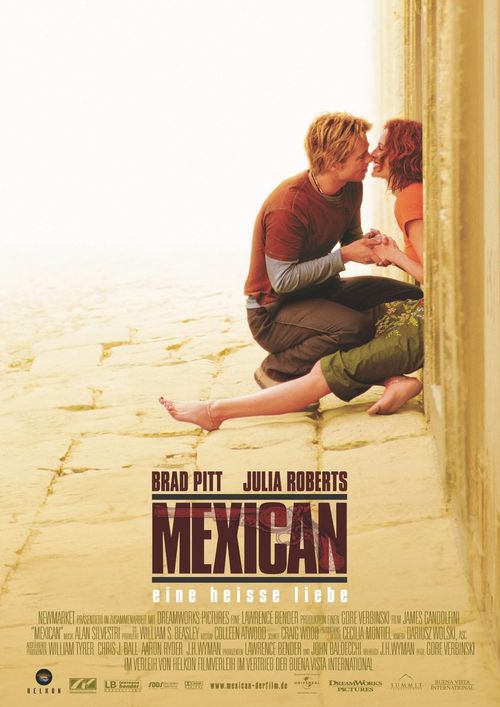