Cancel
In India, Tilo has the ability of foreseeing the future. When their parents are killed by bandits, she is kidnapped but escapes and is raised by the First Mother in a sort of traditional cult of spices. She becomes the Mistress of Spices and is sent to the Spice Bazaar in San Francisco, with the mission of following three basic rules: help her clients to accomplish their desires with the spices, but never hers; never leave the store; and never be touched in the skin. When she meets the handsome American architect Doug, she feels a great attraction and desire for him, breaking the first rule and being punished by the spices.
See Storyline (May Contain Spoilers)

Tilo (Aishwarya Rai), an immigrant from India, is a shopkeeper, an unusually strong clairvoyant, and a chosen Mistress of Spices. The Spices she gives to her customers help them to satisfy their certain needs and desires, such as "sandalwood to dispel painful memories; black cumin seed to protect against evil eye."

As a young girl, Tilo was initiated as one of several young Mistresses of Spices by the First Mother (Zohra Sehgal), who warns the girls about certain rules they must follow, or face dire consequences. They are instructed never to leave their respective stores all around the world, physically touch the skin of the people they meet, or use the great and incomprehensible strength and power of the Spices to their own ends.

Tilo ends up in the San Francisco Bay Area in a store called "Spice Bazaar". Tilo's customers include Haroun, a cab driver (Nitin Ganatra), a grandfather (Anupam Kher) dealing with an American-born granddaughter Geeta (Padma Lakshmi), Kwesi, a man trying to impress his girlfriend (Adewale Akinnuoye-Agbaje) and Jagjit, a teenager trying to fit in at school (Sonny Gill Dulay).

Her life takes a turn one day, when a young architect named Doug (Dylan McDermott) crashes his motorcycle outside her store. Tilo tends to his injuries while trying to ignore their mutual romantic attraction. Her life changes when he touches her and they begin to fall in love.

But the Spices are suddenly angry and jealous, and things soon start to go sour in her relationships with her other customers. Haroun gets in an accident, Geeta's family situation does not improve, Jagjit falls in with the wrong crowd at school, and Kwesi's girlfriend breaks up with him. Doug comes to meet her that night and sadly tells her that his Native American-born mother had died.

Tilo recognizes that the source of these misfortunes is her breaking of the rules. The First Mother comes to her in a vision and scolds her for choosing Doug over the Spices. She vows that she will return to India, and posts a notice about a closing sale. She goes all out to help her customers one last time and tells the Spices that she will spend just one night with Doug, and then she will give herself utterly to them. She closes the store and goes off with Doug for the night. After a night of love-making, she leaves him a note that she must leave and cannot return, but that she will always deeply love him. Then she goes back to the store and sets the Spices on fire, with her at the center of the flames, as a sign of eternal servitude and slavery to the mystical Spices.

Doug comes searching for her, and finds the store devastated. But Tilo has not been burned after all; she is still there, alive and barely conscious. There is no sign of a fire, but there has been an earthquake. We see a vision of the First Mother sitting at the beach, telling her that because she demonstrated her willingness to give up everything for the Spices, now she can have everything she desires and the Spices will never desert her again. Doug agrees to help her rebuild the store, and she happily reunites with him as they walk along the beach holding hands.

Tagline: One spice for passion. And one woman who knows its name.

Based on 0 rating
0 user 0 critic
Did you know? This film is based on the novel Mistress of Spices by Chitra Banerjee Divakaruni. Read More
0 User Reviews
No reviews available. Click here to add a review.
Cast

Writer Gurinder Chadha and her mother made all the mango and carrot pickles seen at the spice store. 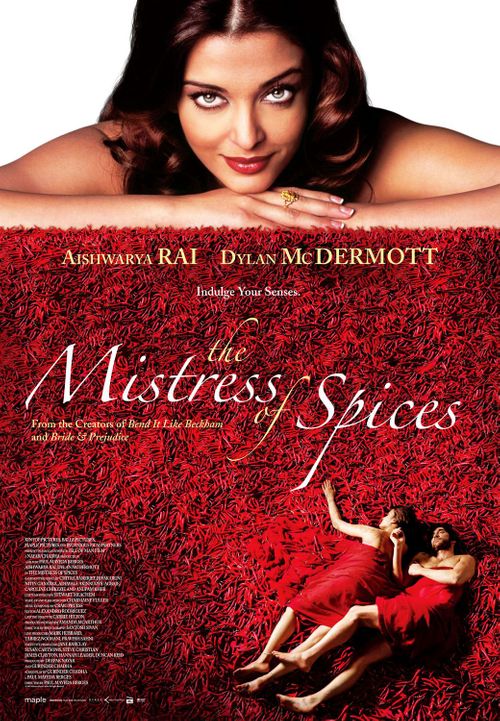 The Mistress of Spices 2006