Cancel
Based on a true story about a man named Christopher Gardner. Gardner has invested heavily in a device known as a "Bone Density scanner". He feels like he has made these devices. However, they do not sell as they are marginally better than the current technology at a much higher price. As Gardner tries to figure out how to sell them, his wife leaves him, he loses his house, his bank account, and credit cards. Forced to live out in the streets with his son, Gardner is now desperate to find a steady job; he takes on a job as a stockbroker, but before he can receive pay, he needs to go through 6 months of training, and to sell his devices.

Based on 0 rating
0 user 0 critic
Did you know? The man seen walking on the street past Will and Jaden Smith at the end of the film is the real Chris Gardner, whom the film is based on. Read More
0 User Reviews
No reviews available. Click here to add a review.
Cast

Will Smith
as Chris Gardner

David Haines
as Other Young Executive

Revealing Mistakes
When Chris and his son are denied a room at the shelter, a homeless guy hits a parking meter, which wiggles like it's made of rubber.

Continuity
When Chris is in the cab with Mr. Twistle solving the Rubik's Cube, the cab window behind him has a decal for a local radio station (KMEL) in the interior shots, but not the exterior shots.

Continuity
When Chris and Christopher are collecting their stuff after being kicked out of the hotel room, Christopher picks up his basketball in a grocery bag. The next time he is seen, he is carrying a garbage bag.

Continuity
When Christopher enters Martin Frohm's office after he is summoned, Martin comments on Chris' shirt ("nice shirt"), which is blue. However, when Chris leaves the office his shirt is white.

Continuity
After Chris and his son are denied a room, Wayne walks along in front of them, towards the camera, in a gray hat and a purple t-shirt.

Continuity
At the beginning, when Chris and Christopher are walking to daycare, Christopher is carrying a basketball in a plastic grocery bag. In subsequent shots, he isn't holding the ball. He receives the same ball as a gift later in the film.

Crew/Equipment Visible
When Chris enters the day care center to pick up his son, the cameraman and camera are reflected in the window.

Errors in Geography
In the beginning, a person walks from a subway station while eating UTZ potato chips. UTZ chips are not available on the West Coast.

Factual Mistake
In the scene where the train doors close on Chris Gardner's hand while he is holding a bone scanner, he doesn't let go, and the train departs with the doors partially open. That would never happen in real life as BART trains are designed not to move if the doors of any car are obstructed.

Factual Mistake
When Smith purchases a new lamp for the scanner and is on the bus, he holds it up to the camera showing it to be a Xenon tube, the sort used for strobe lights and camera flash. Later on after he repairs the scanner and switches it on, it stays continuously illuminated. This type of lamp is a high speed discharge lamp that can only flash and lighting it continuously would melt it in seconds.

Factual Mistake
When the Gardners leave for the football game in Walter Ribbon's Mercedes, the license plate is for a truck, not a car.

Revealing Mistakes
Chris takes his bone density scanner from the hippie on the bus. As he walks out, if you listen very closely, a woman whispers "is that Will Smith?"

Revealing Mistakes
At the subway, Christopher is sitting on the bench with his legs crossed, showing the sole of his sneakers which are clean, as if they were brand-new.

Character Error
When Chris visits the doctor who buys his last machine, the abdominal x-ray hanging in the background is upside-down. The pelvis and bladder should be at the bottom, not the top.

Continuity
When Chris gets into the car after the football game, the bone scanner isn't in his lap. In the next shot, it is sitting on his lap.

Continuity
When Martin Frohm asks Chris to borrow $5 for the taxi, a red-headed woman in a burgundy jacket walks between the actors and the camera. In the next shot, she walks by again.

Continuity
When Chris chases Hippie Girl in the BART station, he looks from the gate area down to the train platform. The Hippie Girl stands next to a BART train with a decal that says "#1 Transit System in America" just to the left of the door. After he runs down to the platform and bangs on the closed train door, the decal is gone.
Trivia:
The man seen walking on the street past Will and Jaden Smith at the end of the film is the real Chris Gardner, whom the film is based on.

The homeless people who worked as extras received a full day's pay at minimum wage ($8.62/hr) and free catered meals. For some it was the first money they'd made in a while.

Speedcubing champions Tyson Mao and Toby Mao and Lars Petrus were hired to coach Will Smith to solve a Rubik's Cube in under two minutes.

This film is based on a true story.

Will Smith wanted Gabriele Muccino to direct this movie after seeing his films The Last Kiss (2001) and Remember Me, My Love (2003).

Dan Castellaneta, who voices Homer Simpson, co-stars in the film as one of Gardner's superiors and requests a donut from him. This is a nod to Casellaneta's animated counterpart who shares a similar taste for donuts.

Mr. Ribbon asks his secretary to call Mr.Ristuccia. This surname is often used by director Gabriele Muccino in his movies.

Throughout the film, advertisements for Pacific Southwest Airlines (PSA) can be seen in numerous places (Taxis, Busses, BART stations). PSA was a very popular low-fare airline in California during the period that this film is set in. 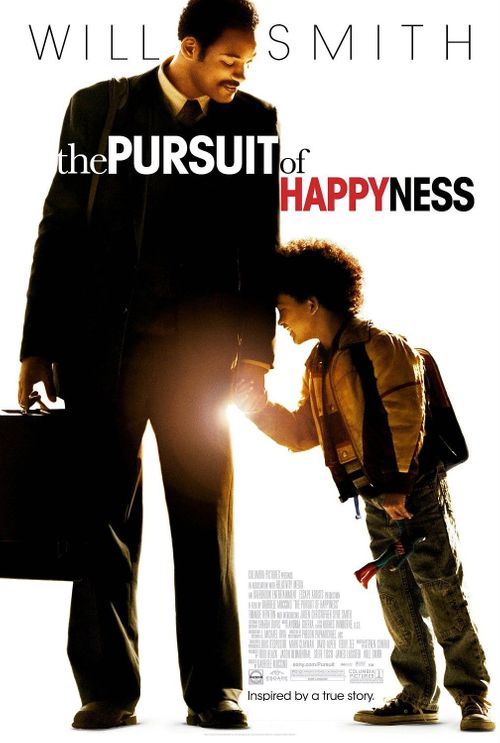 The Pursuit of Happyness 2006