Cancel
Tulio (Kevin Kline), Miguel (Kenneth Branagh), and their hilarious horse Altivo are in search of treasure on the legendary Lost City of Gold when they are mistaken for gods and lavished with riches beyond their wildest dreams. As friendship, loyalty and greed collide, they must make the decision of their lives: run off with the gold, or face risks and dangers to save the people of El Dorado!
See Storyline (May Contain Spoilers)

In 1519 Spain, two con artists, Miguel and Tulio, win a map to the legendary City of Gold, El Dorado, in a rigged dice gamble (though they ironically win the map fairly). After their con is exposed, the two evade the guards and hide inside barrels, which are then loaded into one of the ships to be led by conquistador Hernán Cortés for the New World. During the voyage, they are caught as stowaways and imprisoned, but break free and take a rowboat with the help of Cortés' horse, Altivo.

Their boat reaches land, where Miguel begins to recognize landmarks from the map, leading them to a totem marker near a waterfall that Tulio believes is a dead end. As they prepare to leave, they encounter a native woman, Chel, being chased by guards. When the guards see Tulio and Miguel riding Altivo as depicted on the totem, they escort them and Chel to a secret entrance behind the falls, into El Dorado. They are brought to the city's elders, kindhearted Chief Tannabok and wicked high priest Tzekel-Kan. The pair are mistaken for gods and are given luxurious quarters, along with the charge of Chel. She discovers that the two are conning the people but promises to remain quiet if they take her with them when they leave the city. The two are showered with gifts of gold from Tannabok but disapprove of Tzekel-Kan attempting to sacrifice a civilian as the gods' ritual.

Tulio and Miguel instruct Tannabok to build them a boat so that they can leave the city with all the gifts they have been given, under the ruse that they are needed back in the 'other world.' During the three days the construction will take, Miguel explores the city, and Chel gets romantically close to Tulio. Miguel comes to appreciate the peaceful life embraced by the citizens; by then, he reconsiders leaving, especially after overhearing Tulio telling Chel that he'd like her to come with them to Spain, before adding he'd like her to come with specifically him and to forget Miguel – straining the relationship between the two.

When Tzekel-Kan sees Miguel playing a ball game with children, he insists the "gods" demonstrate their powers against the city's best players in the same game. Tulio and Miguel are outmatched, but Chel can substitute the ball with an armadillo named Bibo, allowing them to win the rounds until the final one, where Bibo is replaced with a real ball, but once again, the two ironically win the game fairly. Miguel spares the ritual of sacrificing the losing team and chastises Tzekel-Kan, much to the crowd's approval. Tzekel-Kan notices Miguel received a small cut in the game and realizes the pair are not gods since gods do not bleed, hence the reason for the sacrifices. Afterward, Miguel and Tulio enjoy a party being thrown for them but sooner or later begin to argue about Tulio and Chel's conversation and Miguel's desire to stay. However, before they can continue, Tzekel-Kan conjures a giant stone jaguar to chase them throughout the city. Tulio and Miguel manage to outwit the jaguar, causing it and Tzekel-Kan to fall into a giant whirlpool, thought by the natives to be the entrance to Xibalba, the spirit world. Tzekel-Kan then surfaces in the jungle, where he encounters Cortés and his men. Believing Cortés to be the real god, Tzekel-Kan offers to lead them to El Dorado.

With the boat completed, Miguel decides to stay in the city. As Tulio and Chel board the boat, they see smoke on the horizon and realize Cortés is close. Knowing what will happen if Cortés discovers the city, Tulio suggests using the boat to ram the rock pillars under the waterfall and block the main entrance to the city. The plan succeeds with the citizens pulling over a statue in the boat's wake to give it enough speed. As the statue starts to fall too quickly, Tulio has difficulty in preparing the boat's sail. Giving up on staying in the city, Miguel and Altivo jump onto the boat to unfurl the sails, assuring the boat clears the statue in time. The group successfully crashes against the pillars, causing a cave-in but losing all their gifts in the process. They hide near the totem just as Cortés' men and Tzekel-Kan arrive. When they find the entrance blocked, Cortés brands Tzekel-Kan a liar and takes him, prisoner, as they leave. Tulio and Miguel, though disappointed they lost the gold (unaware that Altivo still wears the golden horseshoes with which he was outfitted in El Dorado), head in a different direction for a new adventure with Chel, presumably also looking for a way back to Spain. 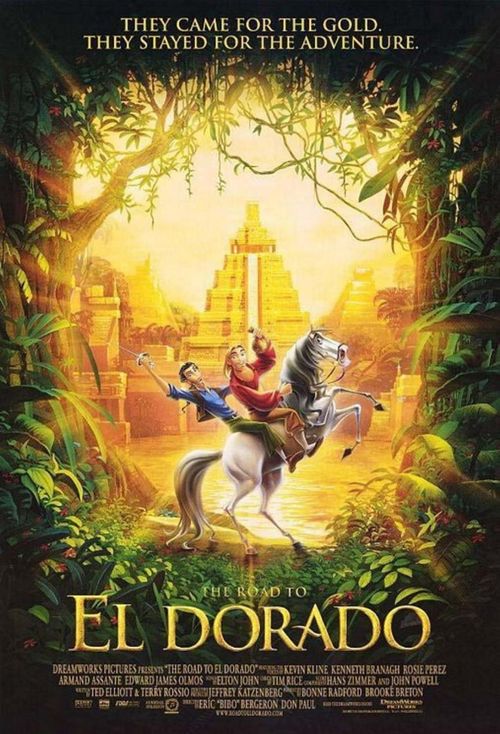