Cancel
This futuristic sci-fi thriller delves into the adventures of a cyborg that is sent from the future on a deadly mission. He has to kill Sarah Connor, a young woman whose life will have a great significance in years to come. Sarah has only one protector - Kyle Reese - also sent from the future. The Terminator uses his exceptional intelligence and strength to find Sarah, but is there any way to stop the seemingly indestructible cyborg? As Kyle and Sara race to escape from the calculated as fascination attempts of the cyborg, the love that blossoms between them will impact the future in a most fantastic way. Will they succeed in protecting the future of humankind from the deadly designs of the powerful machine?
See Storyline (May Contain Spoilers)

On May 12, 1984, two beings from the year 2029 arrive in Los Angeles: one is a Terminator T-800 Model 101 (Arnold Schwarzenegger), a cyborg assassin programmed to kill a woman named Sarah Connor (Linda Hamilton); the other is Kyle Reese (Michael Biehn), a human resistance fighter sent to protect her.

After the Terminator kills two other women named "Sarah Connor" listed in the telephone directory, it eventually tracks down its target to a nightclub. Kyle shows up and saves Sarah from the Terminator's attack and the two make an escape.

Kyle explains to Sarah that in the near future, an artificial intelligence defense network called Skynet will become self-aware and initiate a nuclear holocaust of mankind, also explaining that he himself was born after it. Sarah's yet-to-be-conceived son John will rally the survivors and lead a resistance movement against Skynet and its army of machines.

With Resistance on the verge of victory, Skynet has sent a Terminator back in time to kill Sarah before John is born, as a last-ditch effort to avert the formation of the Resistance. The Terminator is an efficient killing machine with a powerful metal endoskeleton, but with an external layer of living tissue that makes it resemble a human being.

Sarah is also questioned by Lieutenant Traxler (Paul Winfield) and Sergeant Vukovich (Lance Henriksen) about the events that happened. The Terminator shows up and attacks the police station, killing many police officers including Traxler and Vukovich in its attempt to locate Sarah; however, Sarah and Kyle manage to escape and seek refuge in a motel.

Kyle confesses that he has long been in love with Sarah, having been given a photograph of her by her son John so that he could find her. Sarah reciprocates Kyle's feelings and they have sex that night.

The next day, the Terminator tracks them to the motel and Kyle and Sarah escape in a pickup truck. In the ensuing chase, Kyle throws pipe bombs at the Terminator in an effort to destroy it. Kyle is wounded by the Terminator's gunfire; Sarah manages to knock the Terminator off its motorbike but subsequently loses control of the pickup truck and it flips over.

As the Terminator gets up, it is struck by a gasoline tank truck that drags it a short distance. The Terminator hijacks the truck and resumes the chase. Kyle slides a pipe bomb on to the truck's fuel trailer causing a massive explosion. The Terminator emerges from the burning truck and collapses. Kyle and Sarah embrace one another.

The Terminator, with its flesh coating burned away, unexpectedly rises up and continues to pursue them into a factory. Kyle faces the Terminator by hitting it several times with a metal pipe but it knocks him down. Though dazed, he jams his final pipe bomb into its abdomen, causing an explosion which severely damages it; the explosion kills Kyle and injures Sarah.

Still partially functional, the Terminator resumes its attempt to kill Sarah. She leads it into a hydraulic press and crushes it, causing it to deactivate. Sarah is later taken out of the factory by an ambulance as Kyle's dead body is taken away.

Several months later, a pregnant Sarah is traveling through Mexico. Along the way she records audio tapes which she intends to pass on to her unborn son, John. She debates whether to tell him that Kyle is his father. While stopping at a gas station, a boy takes a photograph of her which she purchases—the same photograph that John will later give Kyle. Sarah then drives on toward approaching storm clouds.

Based on 0 rating
0 user 1 critic
Did you know? The initial draft for the movie was sold to James Cameron's wife, Gale Anne Hurd for the price of $1 only. Read More
1 Critic Review

Audio/Video Mismatch
When Sarah is walking from her apartment you can hear the heels of her shoes hitting the pavement. Later when she's walking into the disco she's wearing tennis shoes.

Audio/Video Mismatch
Near the beginning of the police station shoot-out, the Terminator fires his shotgun a few times, but the sound effect of his assault rifle is heard.

Audio/Video Mismatch
Sound synchronisation wrong when Kyle and Sarah are getting up to escape from the Terminator robot, arising from the flames Sarah's screams are not matching her mouth actions

Character Error
When the Terminator tosses the bearded man away from the phone booth and begins searching the phone book for Sarah Conner, he uses his finger sliding down the page to assist separating the lines of type, the way human beings do when they read. Yet the Terminators have specially enhanced telescopic vision that allows them to zoom in/out, etc., on anything, even in the dark. It therefore makes no sense that this Terminator would have to use his finger to assist with his reading, he should be able to merely glance at the book and zoom in on the entire page, or on the smallest part of the page and process this information in seconds.

Character Error
Before the TechNoir scene, Reese pumps his shotgun at least twice, which would load a shell into the chamber and make it ready to fire. But when he identifies the Terminator at the nightclub, he has to pump the gun again before firing.

Continuity
Just before the car crashes into the police station, the officer at the desk is alerted to the car by the headlights flashing in his face, yet when we cut to the car, the lights are off.

Continuity
When the Terminator is stalking Kyle and Sarah in his police car, the sticker on the driver's door reads "To care and protect". When the car is later wrecked in a tunnel, the sticker has changed to "Dedicated to serve".
Trivia:
Arnold Schwarzenegger worked with guns everyday for a month to prepare for the role; the first two weeks of filming he practiced weapons stripping and reassembly blindfolded until the motions were automatic, like a machine. He spent hours at the shooting range, practicing with different weapons without blinking or looking at them when reloading or cocking; he also had to be ambidextrous. He practiced different moves up to 50 times.

One afternoon during a break in filming, Arnold Schwarzenegger went into a restaurant in downtown L.A. to get some lunch and realized all too late that he was still in Terminator makeup - with a missing eye, exposed jawbone and burned flesh.

The beginning of production was postponed for nine months, due to Arnold Schwarzenegger's commitment to Conan the Destroyer (1984). During this time, James Cameron wanted to be working but didn't have the time to do a whole other film so he took on a writing assignment; this turned out to be Aliens (1986).

Near the beginning of the movie, when Sarah Connor (Linda Hamilton) receives a message on her answering machine breaking her date, the voice on the machine is James Cameron's. Years later, Hamilton and Cameron got married and subsequently divorced.

O.J. Simpson was considered for the Terminator, but the producers feared he was "too nice" to be taken seriously as a cold-blooded killer. In 1990 (before Simpson's first trial) Dark Horse Comics printed issues using his likeness.

The initial draft for the movie was sold to James Cameron's wife, Gale Anne Hurd for the price of $1 only.

Arnold Schwarzenegger tried to avoid Linda Hamilton and Michael Biehn as much as possible since the Terminator was trying to kill them, not form connections.

The revolver Reese carries after the police station massacre and gives to Sarah at the motel is Lt. Traxler's. In a deleted scene, Reese and Sarah are trying to escape the police station when they come across the wounded Traxler. He now believes their story and gives Reese his sidearm, telling him to protect Sarah.

In James Cameron's original treatment, Sarah Connor has an old figure skating injury that was fixed with a couple of surgical pins and the terminator would cut the legs open of the first two Sarah Connors to find this identifying mark.

The scene where the Terminator breaks into a station wagon was the very last thing shot and it was added a few weeks before the film's release. The scene was filmed in 2 hours by James Cameron and Arnold Schwarzenegger alone. Due to insufficient funds, Cameron had to pay for the scene himself, but could not afford a police permit. As such, another set of Arnold's clothes was placed behind the wagon trunk and Cameron told him to change the moment the scene was deemed finished.

The TechNoir set was actually a downtown L.A. restaurant, redressed to look like a nightclub.

Geena Davis auditioned for the role of Sarah Connor.

The teaser trailer for this film was narrated by Peter Cullen, best known to fans as the voice of the robotic hero Optimus Prime from Transformers.

The original treatment by James Cameron included the detail that the Terminator needed to eat periodically in order for his human flesh to survive. A scene is included where the Terminator eats a candy bar, wrapper and all. This detail was incorporated into the script for Terminator 3: Rise of the Machines (2003), with the Terminator selecting Arnold Schwarzenegger's favorite Austrian chocolate wafer. When fans learned that a scene had been shot where the Terminator ate chocolate, the reaction was overwhelmingly negative and the scene was omitted. 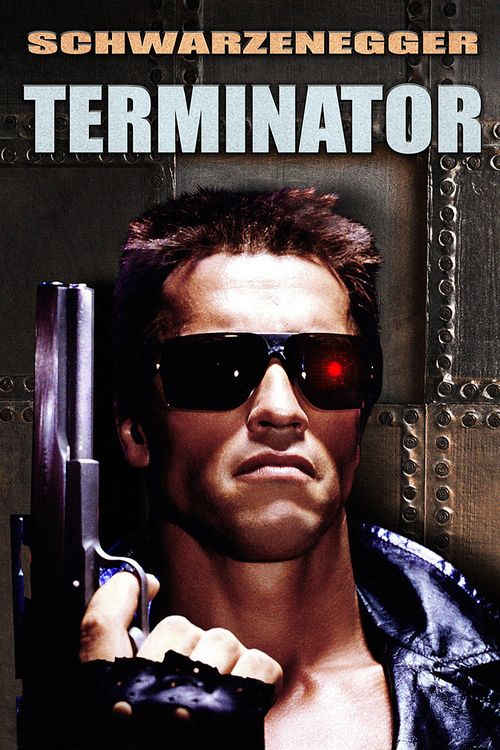 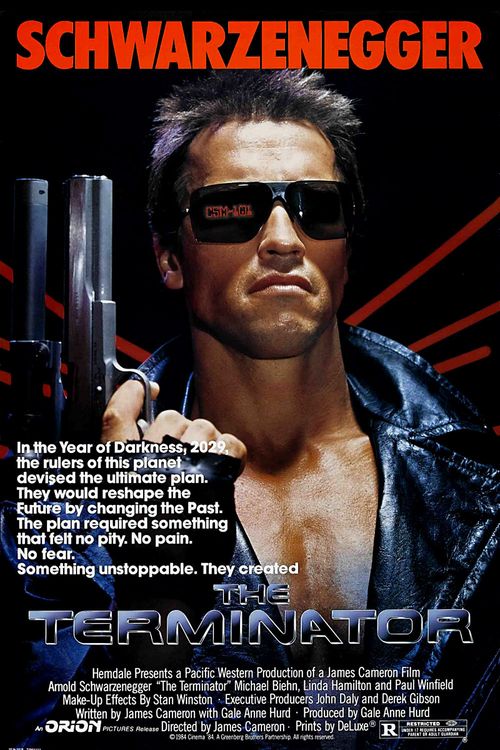 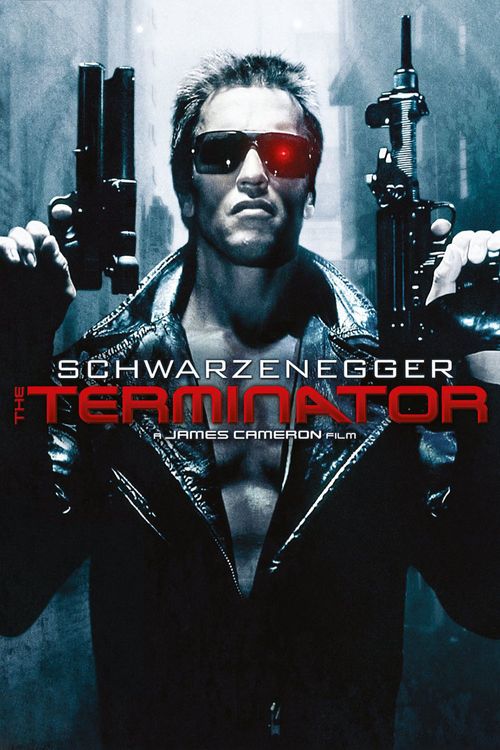