Cancel
Paleontologist Kate Lloyd is invited by Dr. Sandor Halvorson to join his team who have found something extraordinary. Deep below the Arctic ice, they have found an alien spacecraft that has been there for perhaps 100,000 years. Not far from where the craft landed, they find the remains of the occupant. It's cut out of the ice and taken back to their camp but as the ice melts, the creature reanimates and not only begins to attack them but manages to infect them, with team members devolving into the alien creature.
See Storyline (May Contain Spoilers)

The body is brought to the base in a block of ice. That evening, while the team celebrates their find, Derek sees the alien burst from the ice and escape the building. The team searches for the creature and discovers that it killed Lars' dog. Olav and Henrik find the alien which then grabs and engulfs Henrik. The rest of the group arrive and set fire to the creature, killing both it and Henrik. An autopsy of the scorched alien corpse reveals that its cells are still alive and are consuming and imitating Henrik's own.

Derek, Carter, Griggs and Olav take the helicopter to seek help. Kate discovers bloody dental fillings near a blood-soaked shower. She runs outside to flag down the helicopter after it takes off. When it attempts to land, Griggs transforms into the Thing and attacks Olav, causing the helicopter to crash in the mountains. When Kate returns to the shower, she finds the blood is gone. The team agrees to evacuate, but Kate confronts them with her theory that the Thing can imitate them and has likely already done so. They dismiss her claims, but Juliette says she saw Colin leaving the showers. Juliette and Kate look for the vehicle keys to prevent the others from leaving, when suddenly Juliette transforms and attacks Kate. As Kate flees, she runs past Karl who is consumed by the creature instead. Lars arrives with a flamethrower and burns the Juliette-Thing.

Carter and Derek return to the base, but the team refuses to believe that they could have survived the crash. Kate has Carter and Derek isolated until a test can be prepared to verify they are human. Adam and Sander work on a test, but the lab is sabotaged. Kate proposes another test; believing that the Thing cannot imitate inorganic material, she inspects everyone and singles out those without metal fillings: Sander, Edvard, Adam, and Colin. Lars and Jonas go to retrieve Carter and Derek for testing, and discover they have broken out of isolation. As Lars searches near a building, he is suddenly pulled inside. The group hears Carter and Derek breaking into the building and rushes to intercept them. Edvard orders Peder to burn them.

Peder takes aim, but Derek now has a gun and shoots several times, killing Peder and rupturing the flamethrower's fuel tank which ignites. The explosion knocks Edvard unconscious. When brought to the rec room, Edvard transforms, infecting Jonas and Jameson before assimilating Adam. Kate torches the infected Jonas and Derek before she and Carter pursue the Thing. While the pair searches, Sander is also infected. After they separate, the Thing into which Edvard and Adam are fused corners Carter in the kitchen, but Kate burns it before it can attack. Kate and Carter see Sander drive off into the blizzard and pursue him in the remaining snowcat.

They arrive at the now-active spaceship. Kate falls into the ship and is separated from Carter. Confronted by the creature (which briefly uses Sander's face), Kate destroys it with an explosive grenade and the damage deactivates the ship. As Kate and Carter return to their vehicle, Kate accuses Carter of being a Thing because he is missing his earring. When she confronts him, Carter points to the wrong ear. Kate burns him and retreats to a snowcat. Whether she survives or not is left as a mystery, but Carter did mention that there is a Soviet base a few miles away, before Kate killed his Thing replicant.

The following morning, helicopter pilot Matias arrives at the base. Colin is shown to have committed suicide in the radio room. Matias sees the burned remains of the Adam/Edvard alien in the snow. Lars orders Matias at gunpoint to show his dental fillings to prove he is human. The Thing, in the form of Lars' deceased dog, runs out of the camp, and Lars and Matias give chase in the helicopter, thus setting the events of John Carpenter's The Thing in motion.

Tagline: It's not human. Yet.

Based on 0 rating
0 user 0 critic
Did you know? When we first meet Kate Lloyd she is studying a thawing cave bear (ursus spelaeus). Read More
0 User Reviews
No reviews available. Click here to add a review.
Cast

Visual Effects Producer
Pam Hammarlund
Visual Effects Artist
Keith Acheson
Digital Compositor
Mathieu Archambault
Technical Details
Film Type:
Feature
Language:
English
Colour Info:
Color
Sound Mix:
Dolby Digital, Sony Dynamic Digital Sound
Frame Rate:
24 fps
Aspect Ratio:
2.39:1 (Scope)
Stereoscopy:
No
Fun Stuff
Taglines:
It's not human. Yet.
In a place where there is nothing, they found something.
Filming Locations:
Toronto, Ontario
Pinewood Toronto Studios, Port Lands, Toronto, Ontario
British Columbia
Canadian Forces Base, Trenton, Ontario
Stouffville, Ontario
Goofs:
Continuity
Near the beginning when flying to the Antarctic base, Dr. Kate Lloyd (Mary Elizabeth Winstead) is shown flying in a helicopter without hearing protection or headphones (one of the characters motions her to put them on so they can converse). Flying in a cargo helicopter is painfully loud (120db or higher) and there is no way that anybody could fly in one for hours without protecting their hearing. In fact, it's mandatory on the majority of flights

Continuity
Jameson's skiing cap changes position on his head in many shots. Most noticeably when he enters the room where the thing is initially kept.

Continuity
When Carter and Jameson takes over and orders the others to pick up Edvard who is passed out on the floor, the flame thrower Carter is carrying is lit, then unlit, then lit again.

Factual Mistake
When Lars is guarding the helicopter pilots, he yells at them a line in Norwegian which the subtitles mistranslate as, "Don't move, demons". An accurate translation of the line would be, "Take it fucking easy".
Trivia:
The red axe that "Joel Edgerton" uses and eventually sticks into the wall can be seen still stuck in the wall when the Americans visit the Norwegian camp in the original John Carpenter version.

The producers convinced Universal Studios to allow them to create a prequel to John Carpenter's The Thing (1982) instead of a remake, as they felt Carpenter's film was already perfect, so making a remake would be like "painting a mustache on the Mona Lisa". However, the prequel still has the title of the original film, because they couldn't think of a subtitle (for example, "The Thing: Begins") that sounded good.

An enormous amount of screen shots from the first movie were kept on the set while filming at all times, in order to ensure that the Norwegian station would be rebuilt to the smallest details.

The filmmakers used Kurt Russell's height as a guesstimate to how big the sets would have to be to faithfully recreate the Norwegian camp as no blueprints existed from the John Carpenter movie.

John Carpenter, the director of the 1982 remake The Thing (1982), was enthusiastic about making a cameo appearance, but scheduling conflicts prevented him from making one.

The first draft of the screenplay was written by Ronald D. Moore in 2009, though Universal then opted to have the screenplay rewritten by Eric Heisserer. However, in 2013 Moore became a co-producer and writer on the series Helix (2014) which features an extremely similar premise (a team of scientists at a remote Arctic research base combating a lethal alien virus-like organism that horrifically mutates humans and could wipe out humanity if it spread).

The song Kate is listening to on her headphones is "Who Can It Be Now?", a song by Australian band Men at Work from their 1981 debut album, "Business as Usual". The lyrics tell of a paranoid man who hears knocking at his house door and wishes to be left in solitude. This foreshadows the paranoia of the scientists later in the film.

The scene where Sander and Finch recruit Kate to come to Antartica is the only scene in this film or in John Carpenter's film that doesn't take place in Antarctica.

In order to not try to compete with Kurt Russell's portrayal of the 1982 film's protagonist, R.J. MacReady, the character of Kate Lloyd was designed to have traits in common with the character Ellen Ripley from the Alien (1979) film series.

This is a prequel to a remake of an adaptation of the novella "Who Goes There?" by John W. Campbell Jr., published in 1938.

When Carter and Jameson return to the camp, they stumble past a funny signpost full of city names and their distances. One of the cities that can be clearly read is Amsterdam, which is where director Matthijs van Heijningen Jr. is from.

When we first meet Kate Lloyd she is studying a thawing cave bear (ursus spelaeus). 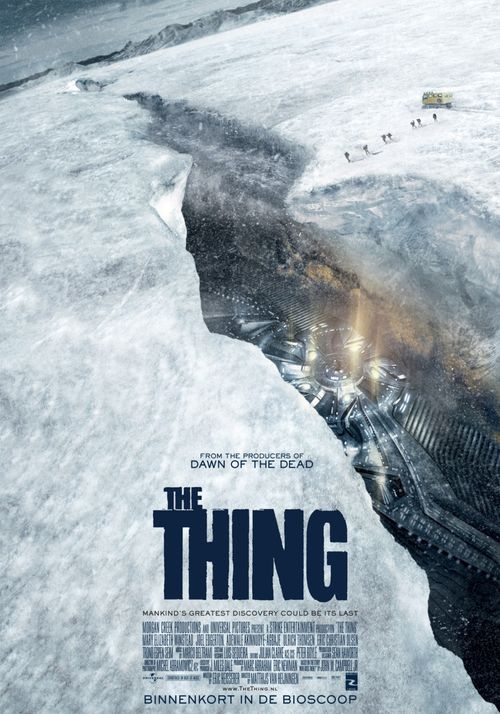 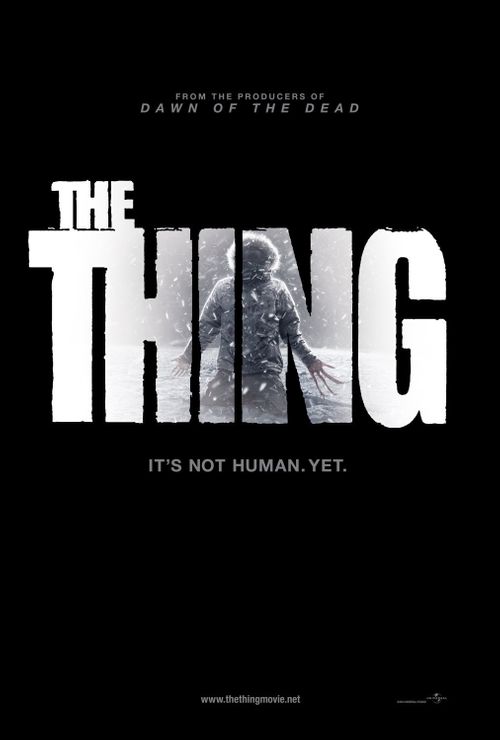