Cancel
Told in four acts, the lives of Geneviève Emery and Guy Foucher of Cherbourg France are presented. Act 1 begins in November 1957, when sixteen year old Geneviève, who works in her widowed mother's umbrella shop called "Les parapluies de Cherbourg", and twenty year old Guy, who works as a mechanic at a gas station, are madly in love and want to get married. They are reluctant to tell anyone not only of their want to get married, but of their relationship. Geneviève believes her mother will think her too young, and would want her to marry someone with better prospects, especially considering her own tenuous financial situation. And Guy is more concerned now about not abandoning his ailing godmother, Aunt Élise, who raised him, and who he looks after along with a young woman named Madeleine. Act 2, told largely from Geneviève's perspective, begins in February 1958. Guy, drafted to fight for the French in Algeria, has been gone for two months, and is expected to be gone for two years. Geneviève rarely hears from Guy. In order to solve their many problems, Geneviève's mother wants her to marry Roland Cassard, a refined and well appointed diamond merchant who travels often for his work but who is devoted to Geneviève whenever he is in Cherbourg. Geneviève, who still loves Guy but who she is slowly losing in terms of him as a person in her mind, has to decide what to do about Roland, especially as it may become more difficult to accept his proposal as time progresses. Act 3, told largely from Guy's perspective, begins in March 1959 upon his military discharge and return to Cherbourg. Life circumstances, including what happened during the war, has changed Guy, and he has to figure out what the next phase of his life will look like because of his new perspective. Act 4 takes place on one snowy day in December 1963, when Geneviève and Guy are shown in their current lives, that based on what has happened in those previous three acts.
See Storyline (May Contain Spoilers)

Madame Emery and her daughter Geneviève (Deneuve) sell umbrellas at their little boutique in the coastal town of Cherbourg in Normandy, France. Geneviève is in love with Guy (Castelnuovo), a handsome young auto mechanic who lives with and cares for his sickly aunt and godmother Elise along with her quiet, dedicated, care-giver, Madeleine (Ellen Farner), a young woman who clearly loves Guy. Subsequently, though, Guy is drafted, and must leave to fight in the Algerian War.

The night before he leaves, he and Geneviève make love. She becomes pregnant, and feels abandoned, as he does not write often. At her mother's insistence, she marries thirtyish Roland Cassard (Marc Michel), a quietly handsome Parisian jeweler who falls in love with Geneviève and is willing to wed her, even though she is carrying another man's child (Cassard had previously wooed the title character in Lola, only to be rejected once the father of her child returned; he relates an edited version of this story to Madame Emery with ill-concealed bitterness). The society wedding in a great cathedral shows Geneviève's upward social and economic movement, but she does not seem at all happy with her situation, and clearly feels trapped.

When Guy returns with a leg injury, he learns that Geneviève has married and left Cherbourg, and that the umbrella store is gone. He attempts to ease back into his old life, but becomes rebellious due both to the war and to the loss of Geneviève. One day, Guy quits his job after an argument with his boss, and spends a night and a day drinking excessively in seedy port bars. He winds up sleeping with a prostitute named Jenny, whose real name turns out to be also Geneviève.

When he returns to his apartment, Madeleine tells him tearfully that his godmother has died. He sees that Madeleine loves him, and cleans up his life with her encouragement. With an inheritance from his aunt, he is able to finance to own a new "American-style" Esso gas station. He asks Madeleine to marry him, and she accepts, though she wonders if he is asking her from despair at Geneviève's actions.

The coda is set in December 1963, approximately five years after the earliest events. Guy is now managing the couple's Esso station. He's with his now upbeat and loving wife Madeleine and their little son François. It is Christmas Eve. Madeleine and François go for a short walk, leaving Guy briefly, after which a new Mercedes pulls in to the station. The mink-clad driver turns out to be a sophisticated, visibly wealthy Geneviève, accompanied by her (and Guy's) daughter Françoise, who remains in the car.

At first shocked to see each other, they go inside the station to talk, and Geneviève explains this is the first time she has returned to Cherbourg since her marriage. Her fairly young mother is now dead. Her rich husband and child are the only family she has left. She has evidently had no children by Cassard, and she makes no mention of him. The two converse while Geneviève's car is being filled with gas, and Geneviève asks Guy if he wants to meet their daughter. Without comment, and little reflection, he answers "no", and this leads to their exchanging their final goodbyes. As the film ends, Guy greets his wife with a kiss and plays with his son.

Tagline: A Film for All The Young Lovers of the World.

Based on 0 rating
0 user 1 critic
Did you know? All the dialogue in the film is sung. Read More
1 Critic Review

Roland tells Genevieve's mother he once loved a woman named "Lola." "Lola" is a Demy film from 1961, in which Marc Michel plays the same character of Roland.

At the ending scene, Geneviève mentioned about picking up her daughter from Anjou. In reality Anjou is 4.5 hours drive away from Paris, and from Paris to Cherbourg is 3.5 hours in an opposite direction. That makes this "detour" a very long drive.

All the dialogue in the film is sung.

The children in the final scene have personal connections to the filmmakers: Genevieve's daughter Françoise is played by Jacques Demy's adopted daughter by Agnes Varda, Rosalie Varda-Demy; and Guy's son François is played by composer Michel Legrand's son. 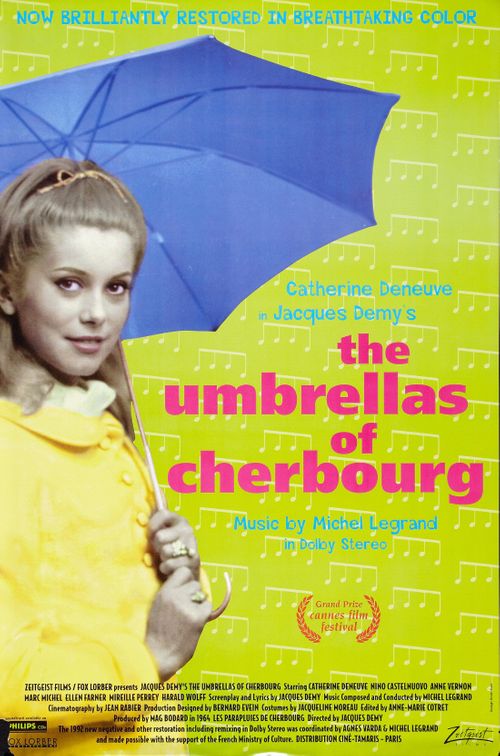 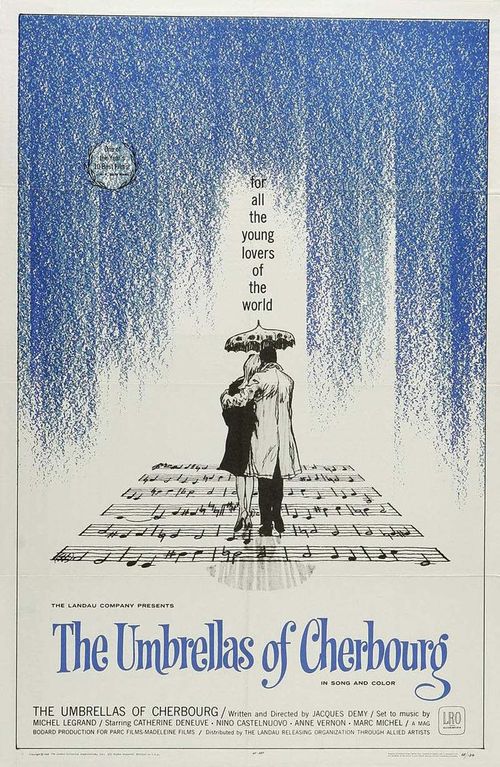 The Umbrellas of Cherbourg 1964