Angarajyam, under King Lomapadan (Babu Antony) is suffering from severe drought. There has been no rain for the past twelve years as the result of a curse by a Brahmin. The film begins with King Lomapadan's visit to Rajaguru (Nedumudi Venu), requesting him to return to Champapuri, the royal capital of Angarajya. Chitrangadan (Ashokan), the son of Rajaguru, was in love with Vaisali (Suparna Anand), daughter of a devadasi, which was against the social customs. Rajaguru had migrated away from capital with the aim of separating his rebellious son from his lover. Now, with the repeated requests from the king, Rajaguru decides to shift back to Champapuri to perform a yagam to please Lord Indra, the god of rain. On the night of his arrival at the capital, Rajaguru receives a mystic vision, in which his guru advices him to bring Rishyashrungan (Sanjay Mitra), the only son of Mahirshi Vibhandakan, to perform a mahayagam at Angarajyam. Only the son of Vibhandakan can save the nation. Rishyashrungan is a teenager, living deep inside a dense forest, along with his father, who is famous for his spiritual powers. Vibhandakan has taken care to keep his son away from the rest of the world since the day he was born. Rishyashrungan has not met any human being in his whole life apart from his father, and is unaware of the world outside his ashram inside the deep forest. Lomapadan and his group of ministers decide to send a beautiful girl to seduce Rishyashrungan and bring him to Champapuri. Rajaguru, who has a deep-rooted anger against Vaisali (Suparna Anand), asks the king to send her to the forest. Vaisali, daughter of Malini (Geetha), a famous dancer in the palace, is also the illegitimate daughter of King Lomapadan, which he is unaware of. Malini, on the demand of the king, sets out with her daughter to the forest. While the rest of the team waits outside the deep forest, Vaisali sets in and meets Rishyashrungan and attempts to seduce him with her looks. He, unaware of the existence of any human being on the earth, is easily carried away by her exotic looks. But by evening, Vibhandakan detects the trouble and warns his son about the danger. But the teenager is again captivated by the charm of Vaisali. But soon realizing his mistake, Rishyashrungan decides to take up deep meditation to attain mental power to win over Vaisali, whom he mistakes for a Mayavi who has come to prevent him from gaining eternal happiness and salvation. Vaisali, who by now has fallen in love with him, is completely broken by seeing him in meditation in the midst of fire. She, in her final attempt at seduction, starts dancing sensuously in front of Rishyashrungan, and succeeds in alluring and taking him to Angarajyam. But the boy hermit regains his senses at the boat and is about to curse her. Malini begs for mercy. On seeing Malini, another woman, the teenage hermit is surprised. Vaisali explains her mission to Rishyashrungan and convinces him of his power to bring rain. They start back to the kingdom. They are welcomed royally at the capital. King Lomapadan welcomes Rishyashrungan personally and takes him to the stage where the yaga has to be performed. Malini, who by now expects the King to accept Vaisali as his child, tries to move towards him, but is stopped by the Rajaguru. Rishyashrungan performs the yagam successfully, and it rains heavily. The entire nation is now in a joyous mood and they celebrate by singing and dancing. Vaisali and her mother Malini are completely forgotten by the King. The Rajaguru advises the King to offer Princess Shanta (Parvathi), his daughter, to Rishyashrungan, which means that the offspring of Rishyashrungan will rule Angarajyam after the time of Lomapadan. The King obeys the order and announces the marriage of the young saint and the princess, which is welcomed by the crowd wholeheartedly. Vaisali is heartbroken. Her attempts to reach the king end in vain and she along with her mother fall down on the ground. Her mother is trampled to death by the crowd. The crowd is no more bothered about them and the heavy rain continues.

Narendra Prasad
as voice of Lomapadhan 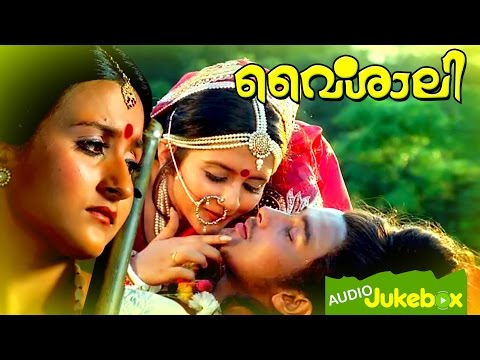