Cancel
Prabhakaran (Vishal) travels all the way from Tamilnadu to Kolkata for a purpose. He takes up a job in a college and meets Aishwarya (Poonam Kaur). He also comes across Paro (Sameera Reddy) in Kolkata and they end up falling head over heels in love with each other. Meanwhile, there is a group in the look out for Prabhakaran at the behest of Eswara Pandian (Shayaji Shinde) and his son. The ensuing sequence of events results in Prabhakaran revealing his true face through a flashback and there begin the twists and turns, which also unravels a sibling story with underworld background.
See Storyline (May Contain Spoilers)

Vedi tells the story of a young Police officer, Prabhakaran (Vishal), who goes to Kolkata in search of his sister, Aishwarya (Poonam Kaur). Prabhakaran, at his native Thoothukudi, had developed enmity with a local don (Sayaji Shinde) by thrashing him in public and putting him behind bars. The enmity gets travelled to Kolkata also where the don join another local gangster to take revenge on the police officer. The baddies trouble the police officer’s sister and her friend, Paaru (Sameera Reddy), who falls in love with Prabhakaran.

While the enmity between Prabhakaran and the local don continues, a flashback of Prabhakaran goes on. It is about how bad him and his sister were treated by the society as their father was a smuggler. So, Prabhakaran decides to send his sister to an orphanage saying that he doesn't know that girl is. This creates a bad name about Prabhakaran in his sister's books. Later, Aishwarya, Prabha's sister gets adopted by a North-Indian family and settles in Kolkata. After few years, Aishwarya's foster parents die of an accident and she is sent to an orphanage again.

Therefore, he goes to Kolkata and he masquerades himself as a Gym Teacher in a College as he is scared that his sister might avoid him.

So, how the police officer defeats the criminals and joins with his sister is the action-packed climax of the movie.

Based on 0 rating
0 user 0 critic
Did you know? Initially, Trisha Krishnan was approached for the lead female role but turned it down as the role did not excite her and similarly Anushka Shetty refused the project, while Hansika Motwani cited that her call sheet was full. Read More
0 User Reviews
No reviews available. Click here to add a review.
Cast

The movie was originally titled as 'Prabhakaran' and was later renamed 'Vedi'.

An item song featuring Sophie Choudry was a highlight of the movie.

Initially, Trisha Krishnan was approached for the lead female role but turned it down as the role did not excite her and similarly Anushka Shetty refused the project, while Hansika Motwani cited that her call sheet was full.

This action thriller is a remake of the successful 2008 Telugu film 'Souryam' and was dubbed in Hindi under the title 'Fighter Mard No.1'. 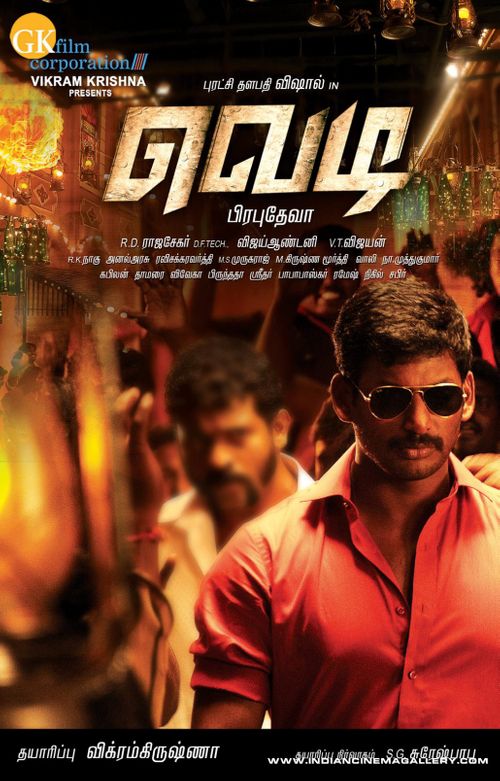