Cancel
Vidyadhar Patwardhan lives a middle-class life with his wife, Sumitra. They have a son, Amar, who lives abroad in London, U.K., and it is through his income that the family lives on. Then Amar returns home with Jenny Mayer, his fiancée, and both are welcomed. Both do not look kindly upon Amar's habit to drink. While the parents are busy preparing for a surprise birthday party for Amar, Amar gets himself killed in a fight. A devastated Vidyadhar and Sumitra arrange for his funeral, and thereafter follow-up with the police as to the conviction of the killer, who has been identified as Harshvardhan Kadam. The police version is quite different from that of Vidyadhar, and they claim that Amar and Jenny were involved in smuggling drugs, a fight ensued, and Amar was killed. Subsequently, two men are killed in a police encounter, after confessing that they had killed Amar over a fight over drugs. Then Jenny is arrested for possession of drugs and lodged in a cell. How will Vidyadhar react to his pregnant daughter-in-law's imprisonment? What can one old man do against the combined might of corrupt law-enforcement and political forces?
See Storyline (May Contain Spoilers)

This is action oriented drama begins with Amar narrating the story of his family and himself. Amar is the son of Vidyadhar and Sumitra Patwardhan, a middle class couple in India. Amar lives and works in London and he sends some of his salary to them. One day Amar returns home with Jenny Mayer, his girlfriend, and announces his intention to get married to her. Initially reluctant, his parents are pleased and happy for the two. One day, Amar goes out celebrating with his friends, whilst his parents and Jenny organise a surprise party for him.

Outside a pub, Amar witnesses a murder and, while trying to apprehend the killer, he gets mortally wounded in the fight. Amar succumbs in the hospital. The assailant is identified as Harshwardhan Kadam, son of a minister Kadam. Soon, the police start covering the case up. Amar is implicated in false charges of drug peddling. Witnesses and close friends of Amar too give false statements. The torture doesn't end there, as police try to implicate Jenny as his accompolice.

When Jenny is imprisoned Vidyadhar decides that it is not good for Jenny to live there, especially since she is expecting Amar's child. Vidyadhar bails her out and implores her to return before she is locked up for good. Harshwardhan goes scot free meanwhile and Vidyadhar decides to seek justice on his own. Ali Asgar, a mechanic and an acquaintance of Patwardhan's, decides to help them. Soon, Ali succeeds in procuring a gun for Vidyadhar.

Vidyadhar decides to confront Harshwardhan in his own office. Harshwardhan cockily lets him enter in and starts taunting him. Vidyadhar accuses him and Harshwardhan arrongantly confesses his crimes, telling Vidyadhar that he cannot prove a thing.

A case is built against Vidyadhar, where he reveals a pocket tape recorder on which the whole confession of Harshwardhan is recorded. Based on the proof, Amar is exonerated of all false charges levelled up against him. Vidyadhar is also set free. In an interview, Vidyadhar makes it clear that he doesn't intend to sue Kadam since his son has been killed and Vidyadhar knows the pain.

In the end, it is shown that Vidyadhar is living a happy life with Sumitra, Jenny, and his grandchild. Amar now explains that his father has always been a hero for him since childhood and he is feeling a little jealous of his daughter who is being treated with same affection with which Vidyadhar treated Amar in his childhood. The movie ends with Amar disappearing in light claiming now he can rest in peace.

Tagline: They pushed him too far, now bear the consequences.

Based on 0 rating
0 user 0 critic
Did you know? While shooting in Pune with Amitabh Bachchan and John Abraham, the crowd held up the shoot. John stepped in and volunteered to calm them down, so that Bachchan could shoot without disruption. Read More
0 User Reviews
No reviews available. Click here to add a review.
Cast

Saif Ali Khan was the original choice to play the role of Amar Patwardhan, but because he couldn't accommodate the filming schedule, "John Abraham" replaced him.

The highlight of the mahurat, was the presence of celebrities who have actually made an attempt to fight against the establishment or the system successfully. These include Medha Patkar, T N Seshan, Anna Hazare, Tarun Tejpal and Sundarlal Bahuguna.

The movies script was written keeping Amitabh Bachchan's character in mind. Mahesh was initially apprehensive to approach Amitabh; he tentatively approached the actor during the shooting of Kaante, and started developing the script after he got a positive response.

While shooting in Pune with Amitabh Bachchan and John Abraham, the crowd held up the shoot. John stepped in and volunteered to calm them down, so that Bachchan could shoot without disruption.

Sharmila Tagore was conscious about the height difference between her and Amitabh Bachchan. Before she started shooting for the film, she went shopping for high heels. On the first day of shooting, she came in wearing her heels, only to realize they were shooting sitting down.

While shooting the climax, Mahesh Manjrekar wanted a happy, laughing family. But during the take, everyone was laughing except Sharmila Tagore. After several retakes, Amitabh Bachchan very sweetly said, "Please laugh, Mrsji" - it looked so real that Mahesh kept it! 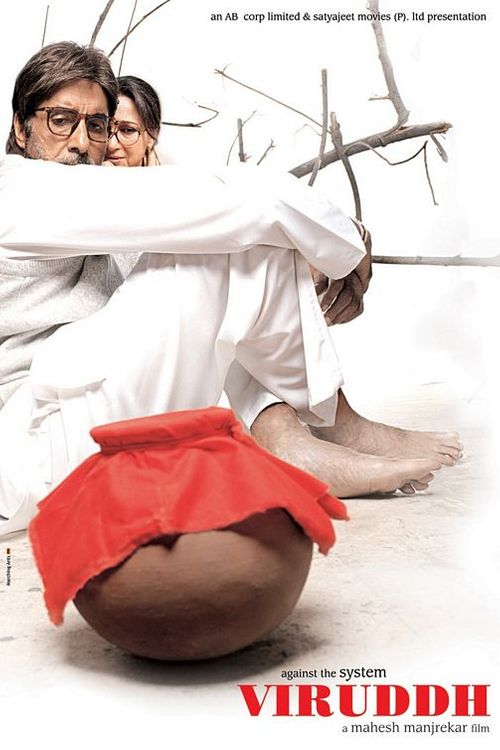