Cancel
Set against the tumultuous backdrop of India in 1938, this poignant drama follows the life of an 8 year old girl. Shockingly, this innocent child who barely even remembers her wedding and has little comprehension of her marriage, has just been widowed. Required by ancient Hindu laws to now leave society, she is brought to a dilapidated widow house or ashram where, according to custom, her hair will be shorn, her clothes exchanged for white robes and the rest of her life, until her death, will be spent in renunciation. However the feisty, precocious, disbelieving Chuyia (Sarala) soon turns the house upside down with her rebellious spark. She begins to have a profound affect on the other women who live there, in particular the devout Shakuntala (Seema Biswas) and the beautiful Kalyani (Lisa Ray) who has been forced into prostitution by the domineering head widow, Madhumati (Manorama). It is Chuyia who leads Kalyani to meet the alluring law student and Gandhi nationalist Narayan (John Abraham), with whom Kalyani falls in love, despite the taboos. What happens next - an attempt at escape fueled by passion and bravery -- will change Chuyia forever and bring both tragedy and an unexpected ray of hope to the widow house.
See Storyline (May Contain Spoilers)

This evocative period drama is set in the year 1938, when India was still under British rule. Child marriage was common practice back then. Widows had a diminished position in society, and were expected to spend their lives in poverty and worship of God. Widow re-marriages were legalized by the colonial laws, but in practice, they were largely considered taboo.

When Chuyia (Sarala Kariyawasam), a seven-year-old girl, loses her husband, in keeping with traditions of widowhood she is dressed in a coarse white sari, her head is shaven and she is deposited in an ashram for Hindu widows to spend the rest of her life in renunciation. There are fourteen women who live in the small, dilapidated two-story house, sent there to expiate bad karma, as well as to relieve their families of financial and emotional burdens. The ashram is ruled by Madhumati (Manorama), a fat and pompous lady in her 70s.

Her only friend is the pimp, Gulabi (Raghuvir Yadav), a sprightly hijra who not only keeps Madhumati supplied with ganja, but also with the latest gossip. The two also have a side business: Gulabi helps Madhumati to prostitute Kalyani (Lisa Ray), the now second-youngest of the widows, by taking her across the water to the customers. Kalyani was forced into prostitution as a child to support the ashram.

Shakuntala (Seema Biswas) is perhaps the most enigmatic of the widows. She is attractive, witty and sharp. She is also one of the few widows who can read. She exudes enough anger that even Madhumati leaves her alone. Quiet and reserved, Shakuntala is caught between her hatred of being a widow and her fear of not being a sincere, dedicated widow. Shakuntala is a very devout Hindu who seeks the counsel of Sadananda (Kulbhushan Kharbanda), a gentle-looking priest in his late forties who recites the scriptures to the pilgrims who throng the ghats of the holy city. It is he who makes Shakuntala aware of her situation, eventually giving her the necessary intellectual input to separate true faith from the hypocrisy and superstition that makes her and the other widows' lives a misery. She's attached to Chuyia, because deprived from her liberties and freedom of choices from a young age, she sees herself reflected in Chuyia; and strives to give her what she lacked.

Chuyia is convinced that her stay is a temporary one, and that her mother will come to take her away. With that thought firmly tucked in her mind and most other widows tolerating a certain quantity of unconventional behavior in the young girl, she quickly adapts to her new life. Madhumati sternly initiates her into widowhood.

Meanwhile, Chuyia befriends the beautiful Kalyani, who is younger and more full of life than other widows at the ashram. She is witness and even agent of Kalyani's budding romance with Narayan (John Abraham), a young and charming upper-class follower of Mahatma Gandhi and of Gandhism. Despite her initial reluctance, Kalyani feels attracted to this young man and eventually buys into his dream of marriage and a fresh life in Calcutta. She eventually agrees to go away with him.

Her plan is disrupted when Chuyia, in her innocence, inadvertently blurts about the secret affair with Narayan while massaging Madhumati one evening. Enraged at losing a source of income and afraid of the imminent social disgrace, Madhumati locks Kalyani up. Much to everyone's surprise, Shakuntala, the usually God-fearing widow, unlocks the door of the hovel and lets Kalyani out to go meet Narayan for the planned rendezvous, and he ferries her across the river to take her home. The journey however, does not culminate in the happy ending that Kalyani had hoped for, as she recognizes Narayan's bungalow as that of one of her former clients, and it turns out that Narayan is the son of one of the men she had slept with.

In the shock of realization, she demands that he turn around the boat and take her back. A confrontation with his father reveals to Narayan the reason of Kalyani's sudden change of heart. Disgusted to know the truth, he decides to walk out on his father and join Mahatma Gandhi (Mohan Jhangiani, actor; Zul Vilani, voice). He arrives at the ashram to take Kalyani with him, only to find out that Kalyani has drowned herself in grief.

Meanwhile, Madhumati sends Chuyia away with Gulabi, to be prostituted as a replacement for Kalyani for a waiting client (presumably Narayan's friend's father). Shakuntala finds out and runs out to prevent the worst, but she only arrives at the shore in time for Chuyia's return. The child is deeply traumatized by having been raped, and is barely able to respond. Cradling Chuyia, Shakuntala spends the night sitting at the shore.

Walking through town with Chuyia in her arms she hears about Gandhi being at the train station, ready to leave town. Intuitively, she follows the crowd to receive his blessing before his departure. As the train is departing, in an act of despair, Shakuntala runs along the train, asking people to take Chuyia with them, and to put her under the care of Gandhi. She spots Narayan on the train and in a last effort gives Chuyia to him. The train departs leaving teary eyed Shakuntala behind, taking Chuyia into a brighter future.

Based on 0 rating
0 user 0 critic
Did you know? American filmmaker George Lucas took out a full-page ad in "Variety" to support Deepa Mehta in her struggle to make this film when Indian authorities made clear their intentions to shut the production down. Read More
0 User Reviews
No reviews available. Click here to add a review.
Cast

Continuity
In the scene when Chuiya is first running up the steps after Kaalu, she is barefoot. When the camera switches perspectives, she has a pair of sandals on. In the next frame, she is barefoot again.
Trivia:
The Varanasi schedule had to be stopped due to threats and demonstrations orchestrated by Hindu fundamentalist groups supported by the leadership of the state government in Uttar Pradesh. The protests were based on a previous version of the script which had been leaked, and lines of dialogue taken out of context to make them appear anti-Hindu. Director Deepa Mehta was burned in effigy during these protests.

American filmmaker George Lucas took out a full-page ad in "Variety" to support Deepa Mehta in her struggle to make this film when Indian authorities made clear their intentions to shut the production down.

Four years after production was shut down in India, filming resumed in Sri Lanka under the fake title "Full Moon" to avoid attention.

Deepa Mehta auditioned around 50 girls for the role of Chuyia. 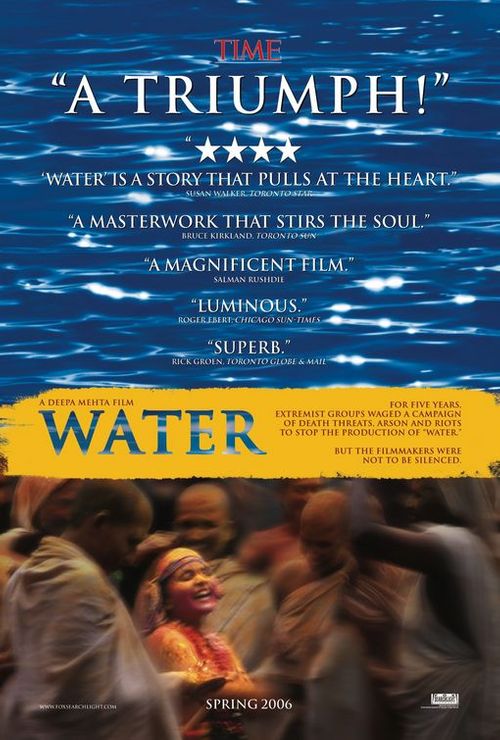 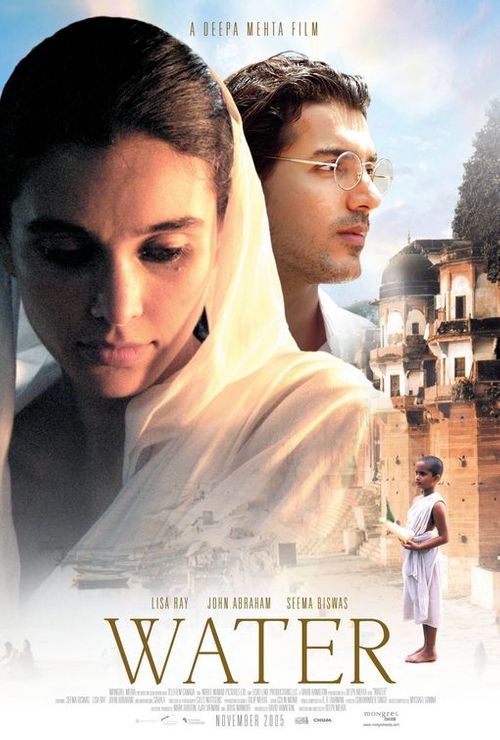 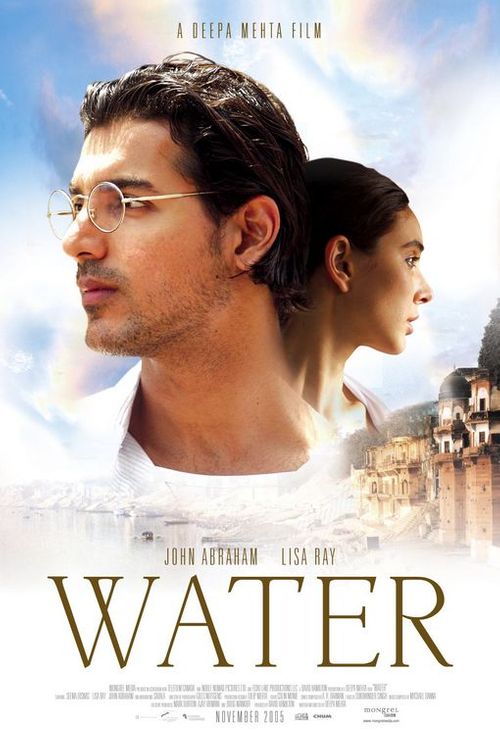