Cancel
Follows a pair of married couples, Alfie (Hopkins) and Helena (Jones), and their daughter Sally (Watts) and husband Roy (Brolin), as their passions, ambitions, and anxieties lead them into trouble and out of their minds. After Alfie leaves Helena to pursue his lost youth and a free-spirited call girl named Charmaine (Punch), Helena abandons rationality and surrenders her life to the loopy advice of a charlatan fortune teller. Unhappy in her marriage, Sally develops a crush on her handsome art gallery owner boss, Greg (Banderas), while Roy, a novelist nervously awaiting the response to his latest manuscript, becomes moonstruck over Dia (Pinto), a mystery woman who catches his gaze through a nearby window.
See Storyline (May Contain Spoilers)

Alfie (Anthony Hopkins) and Helena (Gemma Jones) divorce. Helena begins seeing fortune teller Cristal (Pauline Collins) for spiritual advice. Their daughter Sally (Naomi Watts) has a troubled marriage with author Roy (Josh Brolin), who once wrote a successful book, and is now anxiously waiting for response from his publisher about the manuscript of his newest one. Helena helps pay their rent.

Alfie marries a prostitute, Charmaine (Lucy Punch). Roy falls for Dia (Freida Pinto), a musicologist he sees through a window near his and Sally’s flat, who is engaged to another man. Sally considers having an affair with Greg (Antonio Banderas), her new boss at an art gallery who she confesses she has feelings for but Greg confesses he is having trouble at home and eventually it turns out he is having an affair with Iris (Anna Friel), Sally's protégé. Helena begins a friendship with Jonathan (Roger Ashton-Griffiths), the keeper of an occult bookshop, which develops into romance.

Roy's book is rejected. He hears that a friend, who is also a writer, has died in an accident, and of whom only Roy knows that he had just finished a manuscript that he had not shown to anyone else yet. Roy steals it, and claims it is his work. It is well received. He convinces Dia to break off her engagement, and moves in with her.

Alfie gets into a fight and worries about Charmaine's high expenses. He asks Helena to make a new start with him, but she refuses. Charmaine has sex with another man and gets pregnant. Alfie wants a DNA test to find out whether he is the father, while Charmaine argues that it does not matter.

Sally quits her job and asks Helena for a loan she promised, for setting up her own art gallery, but Helena refuses because according to Cristal it is astrologically a bad time. Sally is furious. Roy is informed that there was a mix-up of the people killed in the accident and is shocked to hear that the friend whose manuscript he stole is actually in coma and recovering.

In the end, all are dissatisfied with their choices, except for Helena. She has acquired from Cristal a belief in reincarnation, and sees her life now as only one episode in her series of lives. Jonathan shares her esoteric beliefs, and they receive the blessing of his deceased wife for the new relationship via seance.

Based on 0 rating
0 user 0 critic
Did you know? Nicole Kidman was cast in the lead role but dropped out. Lucy Punch would later accept the role. Read More
0 User Reviews
No reviews available. Click here to add a review.
Cast

Crew/Equipment Visible
When Alfie and Helena are arguing about his new fitness regime, they enter house and Alfie sits down. The female fitness trainer has followed them. She can be seen in the mirror above the fireplace. Her legs, and the legs of a male crew member, can also be seen reflected in the glass front of the fireplace.
Trivia:
First feature film directed by Woody Allen that is not produced by Charles H. Joffe. Joffe, who had worked with Allen for nearly 40 years, died in July 2008.

In some territories such as Australia, this Woody Allen film was theatrically released after both Midnight in Paris (2011) and To Rome with Love (2012) which were both made after You Will Meet a Tall Dark Stranger (2010).

The line that Roy uses to court Sally ("So much depends on a red wheelbarrow glazed with rainwater beside the white chickens") is actually a poem by William Carlos Williams. It's unclear whether Sally's character knew that or whether Roy stole it for himself (setting up a bit of foreshadowing).

Nicole Kidman was cast in the lead role but dropped out. Lucy Punch would later accept the role. 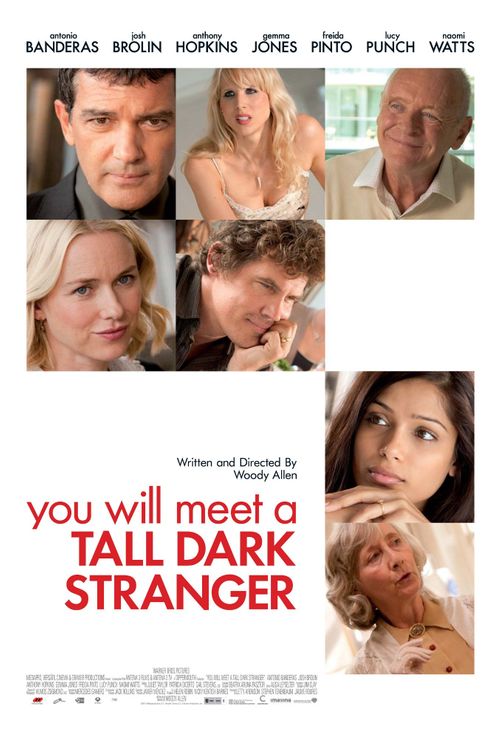 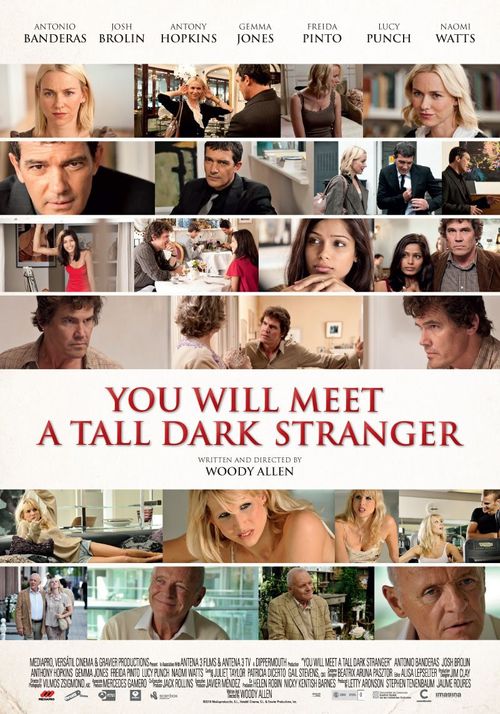 You Will Meet a Tall Dark Stranger 2010