Cancel
In this dramatic courtroom thriller, LT Daniel Kaffee, a Navy lawyer who has never seen the inside of the courtroom, defends two stubborn Marines who have been accused of murdering a colleague. Kaffee is known as being lazy and had arranged for a plea bargain. Downey's Aunt Ginny appoints Cmdr. Galloway to represent him. Also on the legal staff is LTJG Sam Weinberg. The team rounds up many facts and Kaffee is discovering that he is really cut out for trial work. The defense is originally based upon the fact that PFC Santiago, the victim, was given a "CODE RED". Santiago was basically a screw-up. At Gitmo, screw-ups aren't tolerated. Especially by Col. Nathan Jessup. In Cuba, Jessup and two senior officers try to give all the help they can, but Kaffee knows something's fishy. In the conclusion of the film, the fireworks are set off by a confrontation between Jessup and Kaffee.
See Storyline (May Contain Spoilers)

The film covers the court-martial of two U.S. Marines, Lance Corporal Harold Dawson and Private Louden Downey, who killed a fellow Marine, Private William Santiago, at the Guantanamo Bay Naval Base in Cuba. Santiago compared unfavorably to his fellow Marines, had poor relations with them, and failed to respect the chain of command in attempts at being transferred to another base. An argument evolves between base commander Colonel Nathan Jessup and his officers: while Jessup's executive officer, Lieutenant Colonel Matthew Markinson, advocates that Santiago be transferred immediately, Jessup regards this as akin to surrender and orders Santiago's commanding officer, Lieutenant Kendrick, to train Santiago into a better Marine.

When Dawson and Downey are later arrested for Santiago's murder, naval investigator and lawyer Lieutenant Commander JoAnne Galloway suspects they carried out a "code red" order, a violent extrajudicial punishment. Galloway asks to defend them, but instead, the case is given to Lieutenant Daniel Kaffee, an inexperienced and unenthusiastic U.S. Navy lawyer. Initially, friction exists between Galloway, who resents Kaffee's tendency to plea bargain, and Kaffee, who resents Galloway's interference. Kaffee and the prosecutor, his friend Captain Jack Ross, negotiate a bargain, but Dawson and Downey refuse to go along. They insist they were ordered by Lieutenant Kendrick to shave Santiago's head, minutes after Kendrick publicly ordered the platoon not to touch the would-be victim, and did not intend their victim to die. Kaffee is finally won over by Galloway and takes the case to court.

In the course of the trial, the defense manages to establish the existence of "code red" orders at Guantanamo and that Dawson specifically had learned not to disobey any order, having been denied a promotion after helping out a fellow Marine who was under what could be seen as a "code red". However, the defense also suffers setbacks when a cross-examination reveals Private Downey was not actually present when Dawson and he supposedly received the "code red" order. Lieutenant Colonel Markinson reveals to Kaffee that Jessup never intended to transfer Santiago off the base, but commits suicide rather than testify in court.

Without Markinson's testimony, Kaffee believes the case lost and returns home in a drunken stupor, having come to regret he fought the case instead of arranging a plea bargain. Galloway, however, convinces Kaffee to call Colonel Jessup as a witness despite the risk of being court-martialled for smearing a high-ranking officer. Jessup initially outsmarts Kaffee's questioning, but is unnerved when the lawyer points out a contradiction in his testimony; Jessup had stated he wanted to transfer Santiago off the base for his own safety, but if he ordered his men to leave Santiago alone and if Marines always obey orders, Santiago would have been in no danger. Under heavy pressure from Kaffee and unnerved by being caught in one of his own lies, an enraged Jessup extols his own importance to national security, and eventually reveals that he ordered the "code red". As he justifies his actions, Jessup is arrested.

Soon afterwards, Dawson and Downey are cleared of the murder charge, but found guilty of "conduct unbecoming a United States Marine" and dishonorably discharged. Dawson accepts the verdict, but Downey does not understand what they had done wrong. Dawson explains they had failed to stand up for those too weak to fight for themselves, like Santiago. As the two prepare to leave, Kaffee tells Dawson he does not need a patch on his arm to have honor. Dawson, who had previously been reluctant to respect Kaffee as an officer, barks, "Ten-hut! There's an officer on deck!" and salutes Kaffee.

Based on 0 rating
0 user 0 critic
Did you know? The original play was inspired by an actual Code Red at Guantanamo Bay. Lance Corporal David Cox and 9 other enlisted men tied up a fellow Marine and severely beat him, for snitching to the Naval Criminal Investigative Service. Cox was acquitted and later Honorably Discharged. In 1994, David Cox mysteriously vanished, and his bullet-riddled body was found three months later. His murder remains unsolved. Read More
0 User Reviews
No reviews available. Click here to add a review.
Cast

Character Error
When Col Jessup orders his clerk to get the White House on the phone the clerk responds with, "Yes, sir." In the Marine Corps the proper response for "order understood and will be carried out" is "Aye-aye, sir."

Character Error
In his infamous diatribe after saying "You can't handle the truth!", Col. Jessup says their walls have to be guarded "by guys with guns". A fanatical Marine like Jessup would NEVER refer to a weapon used by a Marine as a "gun". Neither would the Army for that matter. He would've said "weapon" or "rifle". Guns (or presumably handguns) would only be carried by high ranking officers, such as himself.

Character Error
While meeting with defense attorneys in Guantanamo Bay, Colonel Jessup says "Speak softly and carry an armored tank division." It is highly unlikely that any marine would ever say such a thing, particularly one as gung ho as Jessup. An armored tank division is an army unit. Marine divisions are basically light infantry for maximum deployability. Colonel Jessup would hardly suggest an army formation as the quintessential element of national power. US Marines have armoured battalions. It would have been more appropriate for Jessop to have said "Speak softly and carry and armoured tank battalion".

Continuity
The night before the first day of trial Kaffee opens the door to let Weinberg and Galloway out of his apartment. As they walk to the door Weinberg opens the door again, but it had already been opened.

Continuity
The rear view mirror disappears and reappears in Kaffee's car when Markinson is in the back seat while in the same field of view.
Trivia:
The original play was inspired by an actual Code Red at Guantanamo Bay. Lance Corporal David Cox and 9 other enlisted men tied up a fellow Marine and severely beat him, for snitching to the Naval Criminal Investigative Service. Cox was acquitted and later Honorably Discharged. In 1994, David Cox mysteriously vanished, and his bullet-riddled body was found three months later. His murder remains unsolved.

The movie's line "You can't handle the truth!" was voted as the #29 movie quote by the American Film Institute (out of 100).

Tom Cruise's Jack Nicholson impersonation (when his character is quoting Col. Jessep) was not scripted.

Jack Nicholson repeated his famous courtroom monologue as Col. Jessep off-camera several times so Rob Reiner could film the reactions of other actors from various angles. Nicholson's memorable on-camera performance was filmed last, but according to Reiner and the other cast members, Nicholson gave it his all every take as if he was on camera.

A love scene between Demi Moore and Tom Cruise was planned but was not done because the movie didn't really call for it.

Writer Aaron Sorkin got the story idea from his sister, who in real life experienced a very similar incident at Guantanamo from the "Lt. Galloway" perspective as a female military attorney. In that incident, the victim was similarly assaulted by nine soldiers and was badly injured, but did not die. Sorkin initially turned the idea into a play, and then this screenplay, which was his very first.

The word "sir" is used 164 times during the movie. That's an average of once every 50 seconds.

While filming the scene in which Kendrick (played by Kiefer Sutherland) is driving Kaffee's group around the base in a Humvee through two rows of marching Marines, Sutherland had trouble driving the extra wide vehicle and actually hit Marines on multiple takes.

COL Jessep warns LT Kendrick that Santiago needs to score "4646" on his next Proficiency and Conduct report. Jessep is referring to a system by which the performance of enlisted men is rated on a scale from 0.0 to 5.0; a score of 4.6 corresponds to a rating of "Excellent".

One of the ribbons on Colonel Jessup's dress uniform jacket is the Navy Cross. This is the second highest award for wartime valor given to Navy and Marine personnel, behind only the Medal of Honor in order of precedence.

When searching for an appropriate setting for the trial, the producers learned that regular military courtrooms are plain and featureless offices. In order to create a more photogenic setting, they settled on a vacant courtroom in an empty courthouse.

Tom Cruise's character Lt. Daniel Kaffee was based on Don Marcari, David Iglesias, and Chris Johnson, the 3 military lawyers who actually went to trial in this case.

Two "Misery" novels can be seen beside Danny's typewriter while he watches a ball game. Misery (1990) was also directed by Rob Reiner. 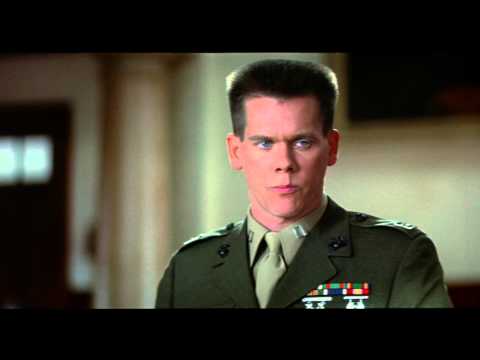 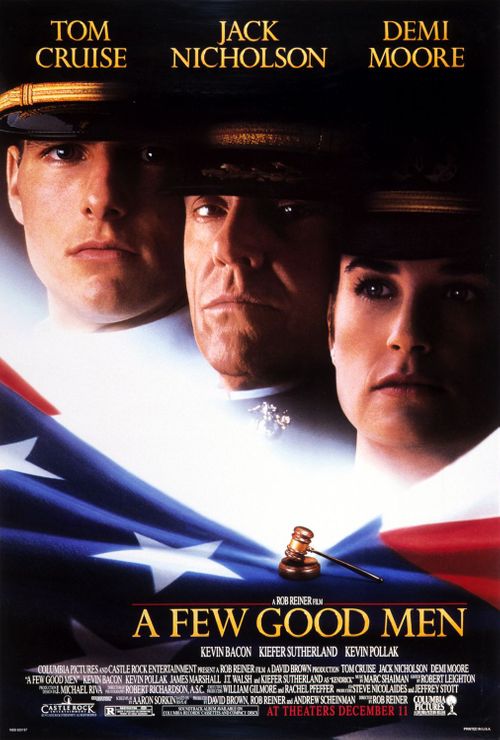 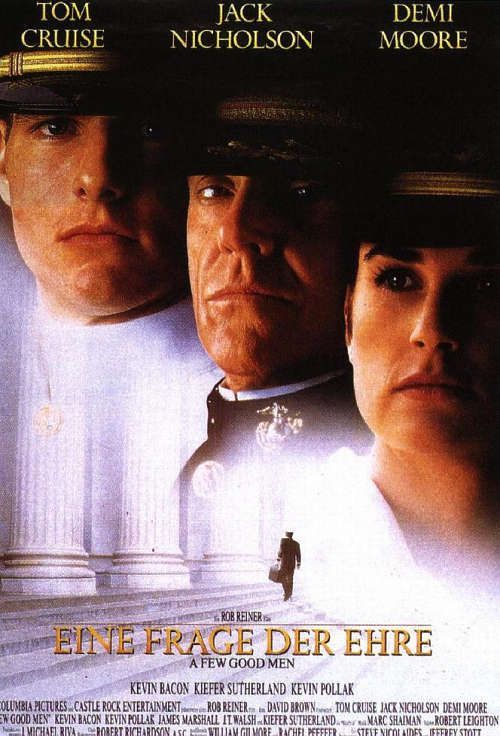