Cancel
Hunted by Robert (Jeevan), the ex-convict Kishenlal (Pran) is forced to abandon his wife Bharati (Roy) and his three sons who get separated by a combination of fate and villainy. Filled with festive fun and charged emotions, this family-oriented drama follows the fluctuating fortunes of their three separated children. The sons grow up to become Amar (Khanna), raised by a Hindu cop; Akbar (Kapoor), looked after by a Muslim tailor; and Anthony (Bachchan), sheltered by a Catholic priest. The convoluted story has Kishenlal become a crime boss, while gangsters led by Robert and his sidekick Zebisco interfere in the story on various occasions to trigger more action. Will the three brothers, who are brought together by fate and become good friends ever come to know of their true relationship? Can they team up to identify the criminals responsible for destroying their family and bring them to justice? Will the entire family reunite once more in happiness and love?
See Storyline (May Contain Spoilers)

Embedded with laughs, this classic romantic comedy opens with Kishanlal (Pran), a chauffeur, as he takes the blame for a fatal hit-and-run accident committed by his mob boss employer, Robert (Jeevan), on the assurance that his family's income will be tripled and their welfare looked after. He returns from prison to find his wife, Bharati (Nirupa Roy) suffering from tuberculosis and his three sons starving.

Seeking help from Robert for the sake of his family, he is ridiculed, humiliated and repudiated, until he turns on Robert and tries to kill him. Making his escape, Kishanlal inadvertently takes a car containing a shipment of gold bullion. Robert's goons give chase.

Kishanlal goes home to rescue his family – only to find his wife's suicide note. Unknown to him, she fails and is struck blind. He leaves his sons in a public park (at the foot of a statue of Gandhi) while he draws off the pursuing goons. In the car chase that follows he crashes, is thrown clear of the wreck, and discovers the gold.

But by the time he returns to the park with his riches, his three children have vanished. Amar, the oldest, has been adopted by a Hindu policeman; a Muslim tailor adopts the youngest and names him Akbar; and a Catholic priest, finding the middle son asleep on the steps of his church, fosters him and names him Anthony.

In revenge, Kishanlal kidnaps Robert's daughter Jenny and raises her as his niece, using the gold to destroy Robert's business and set himself up as mob boss instead.

Amar (Vinod Khanna) becomes a policeman; Akbar (Rishi Kapoor) becomes a singer; the middle brother, Anthony (Amitabh Bachchan), becomes a likable, socially conscious scamp who runs quasi-legal operations and makes God his 'partner' by donating half his income to charity. The three meet when they donate blood for an accident victim, unaware that they are related – or that the recipient is their biological mother Bharati.

Their lives become entangled in an incredible web of coincidences and furious action sequences — interspersed with songs – when Amar's adopted father is seriously wounded and Anthony falls in love with Jenny, Robert's long-lost daughter. Because of it his adoptive father, the priest, is murdered. In their pursuit of justice their paths cross again until, combining efforts, the brothers discover both the culprit and their mutual heritage.

In addition to the ongoing feud between Robert and Kishanlal, each son meets and courts – with greater or lesser difficulty – their love interests. When the grieving mother regains her sight at a Diwali festival in honor of Sai Baba, one by one the family is re-united and Robert, who caused their suffering, is finally imprisoned.

Based on 1 rating
0 user 0 critic
Did you know? In order to shoot the action scene where the villain falls in a well with his car while chasing the hero, director Manmohan Desai asked cameraman Peter Pereira to get inside the well with his camera. Read More
0 User Reviews
No reviews available. Click here to add a review.
Cast

Continuity
When Amitabh is in jail he is bruised with his half face looking black, but when he reaches Pran's place he has no bruises, but there re-appear when he reaches the jail again.

Continuity
When Kishan Lal reaches home from jail in the beginning, he comes to know that his wife Bharati is suffering from Tuberculosis. However, in the later events when Bharati lost her eyesight in an accident, the Tuberculosis was conveniently forgotten till the end
Trivia:
This movie was phenomenally successful both critically and commercially, winning many awards and accolades including Three Filmfare Awards. They are: Best Actor: Amitabh Bachchan, Best Music Director: Laxmikant-Pyarelal, and Best Editing: Kamlakar Karkhanis.

In one of the earliest film merchandising strategies for the promotion of Hindi cinema, three large Erasers with the photographs of Vinod Khanna, Rishi Kapoor and Amitabh Bachchan, was sold in the market.

This movie was remade in Telugu under the title 'Ram Robert Rahim', and in Malayalam as 'John Jaffer Janardhanan', starring Mammootty.

This movie about religious tolerance became a landmark in Hindi movies which focused on the entertainment of mass audiences, and also had a lasting impact on Indian pop culture.

When there were shooting for the mirror scene, Manmohan Desai was shooting the climax of 'Parvarish' on another floor of the studio, Amitabh Bachchan while rehearsing shot the scene in absence of MDK.

According to Director Manmohan Desai, the character of Anthony Gonzalves was based upon a real person from his youth.

In order to shoot the action scene where the villain falls in a well with his car while chasing the hero, director Manmohan Desai asked cameraman Peter Pereira to get inside the well with his camera. 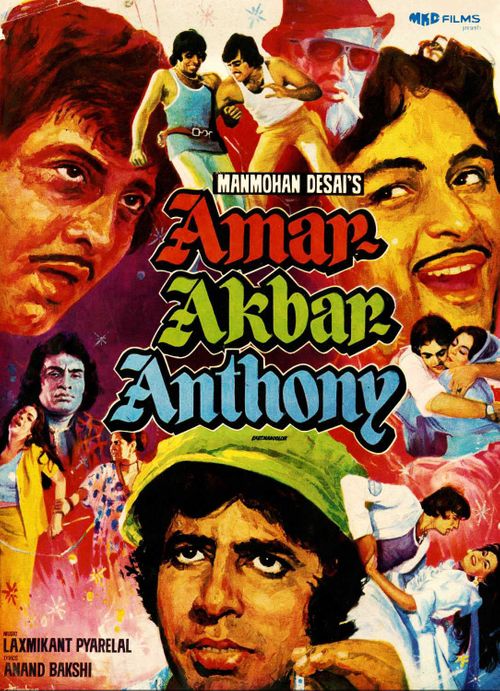 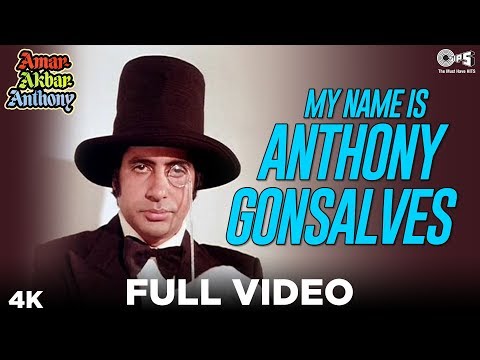 7. My Name Is Anthony Gonsalves