Cancel
Paramveer opens up the 'Yamla Pagla Deewana' club with Dharam and Gajodhar. Now, the trio are back with double the masti, double the fun, double the action, and double the romance, with Suman, and Paramveer's love Reet.
See Storyline (May Contain Spoilers)

In Varanasi, Dharam Dhillon (Dharmendra) is conning people along with his son Gajodhar or Prem (Bobby Deol) by having Dharam pretending to be Guru by the name of Yamla Baba. When Sir Yograj Khanna (Annu Kapoor) from England comes to meet Dharam thinking he is a Guru, Dharam's eyes twinkle and settle on his diamond rings. Dharam & Gajodhar pretend to be the owners of Oberoi Oberoi & Oberoi Company, in order to fool Yograj. Yograj gets impressed, and mentions his daughter. Dharam tells Gajodhar to go make his daughter Suman Khanna (Neha Sharma) fall in love with him, which he does and soon marriage is fixed in England. However, Dharam's elder son Paramveer (Sunny Deol), a loan recovery agent for a bank, by chance meets Yograj Khanna.

Paramveer lands up at Khanna's club just as Joginder Armstrong (Anupam Kher) arrived to take over the club. Joginder is mostly called "Dude" and has the hair and gall to reference one of cinema's most curious and cherished characters (Jeff "The Dude" from The Big Lebowski). Joginder brings his two main flunkies (played by Johnny Lever and Sucheta Khanna) along with a group of goons, who are then all bashed up by Paramveer. Yograj hugs him and makes him his manager. Then, Paramveer encounters Dharam and Gajodhar trying to become part of Yograj's wealth.

Dharam and Gajodhar go to a house currently occupied by an orangutan named Einstein. Einstein's owner, who is absent, is a disciple of Yamla Baba, and has allowed Dharam and Gajodhar to stay at his house, and Einstein will take care of them, but at a cost of 50 British Pounds. Dharam gives Einstein alcohol instead, and nicknames Einstein as Happy.

Dharam tells Gajodhar to make Reet fall in his love where as Reet works in an art gallery and loves paintings. Gajodhar tries his level best to mingle with Reet, but she avoids him and gets close with Paramveer. Dharam says he has another child Q (dolDeol) who is a twin to Prem and has similar identities like him. Q meets the Khanna family and tells them he is a painter. Reet is much attracted to Q and she tells him that she wanted to see his paintings.

Q practices to draw a painting, but in vain. In the night, when Dharam and Q were drunk, Happy or Einstein draws an amazing painting which makes everyone cry and Q tells it was he who painted it. That painting will be a world wide famous and it will be sold in an auction. Paramveer makes some changes in Khanna's night club and Mr.Khanna says he wanted Q to be as the chief guest. In the party, Reet wanted to know what Paramveer thinks about her. Paramveer gets drunk and try to reveal Q's original identity but he was diverted by Joginder Armstrong goons. Next morning, Reet goes to Paramveer house to meet him, but was shocked to see a girl sleeping with Paramveer and she leaves heartbroken.

Meanwhile marriage preparations for Prem and Suman's marriage are going on and Mr.Khanna wanted Reet to marry Q and Reet also accepts it. But Paramveer tells that both the marriage should take place at a time. Dharam tries his level best to convince Suman that Prem is impotent and the girl who marries him dies within 7 months. Despite of knowing this, Suman tells Prem that she loves him and Prem instantly falls in love with her. He leaves to tell the truth to Khanna family. But Joginder goons kidnap Dharam, Prem and Khanna family. There Prem reveals the truth to everyone. Param saves everyone from the goons and Param proposes to Reet, to which she accepts. The film ends on a happy note.

Based on 2 ratings
0 user 4 critic
Did you know? The film's opening sequence which is meant to be Scotland is in fact shot in Swithland, Loughborough, which is in the East Midlands of England. Read More
4 Critic Reviews

Even the collective charm of the Deols can’t make this drivel palatable.
Anupama Chopra, Hindustan Times
0

Revealing Mistakes
When Bunty and Babli go to attack the shop keepers. Babli dressed in a black cat suite has nail extensions on her hands which she uses to scratch one of the shop keepers. When they report back to Joginder 'Dude G' Armstrong, Her long nails are no longer visible.
Trivia:
The film's opening sequence which is meant to be Scotland is in fact shot in Swithland, Loughborough, which is in the East Midlands of England.

More than 700 extras were used in the wedding scene outside Stanford Hall, Lutterworth, Leicestershire.

Asin was offered the film but turned it down due to scheduling conflicts. 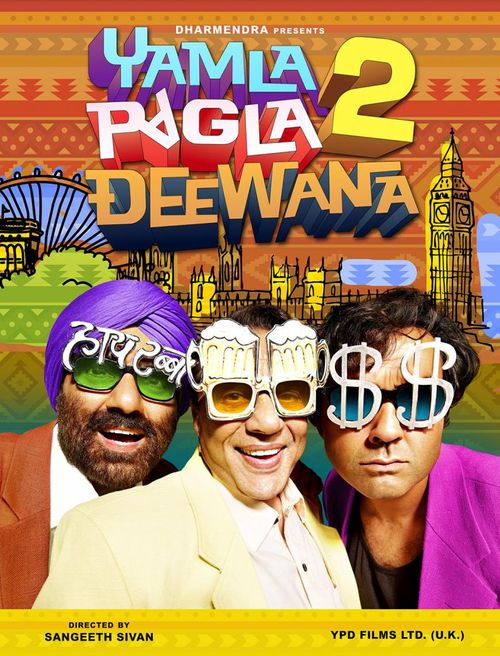