Cancel
This fiery saga Sparks off when a Police Officer, whose family was killed by a bandit named Gabbar Singh, decides to fight fire with fire and recruits two convicts, Jai and Veeru to capture Gabbar. He approaches them in jail, puts the proposal in front of them, and they agree to bring in Gabbar Singh alive - for a hefty price. After their discharge from jail, they travel by train to the village where the Police Officer lives - now with only his widowed daughter-in-law. The three band together to fight one of the most elusive and dreaded bandits of all time. Will the two ex-cons be able to bring Gabbar alive to the Police Officer?
See Storyline (May Contain Spoilers)

In the small village of Ramgarh, the retired policeman Thakur Baldev Singh (Sanjeev Kumar) summons a pair of small-time thieves that he had once arrested. Thakur feels that the duo—Veeru (Dharmendra) and Jai (Amitabh Bachchan)—would be ideal to help him capture Gabbar Singh (Amjad Khan), a dacoit wanted by the authorities for a INR 50,000 reward. Thakur tells them to surrender Gabbar to him, alive, for an additional INR 20,000 reward.

The two thieves thwart the dacoits sent by Gabbar to extort the villagers. Soon afterwards, Gabbar and his goons attack Ramgarh during the festival of Holi. In a tough battle, Veeru and Jai are cornered. Thakur, although he has a gun within his reach, does not help them. Veeru and Jai fight back and the bandits flee.

The two are, however, upset at Thakur's inaction, and consider leaving the village. Thakur explains that Gabbar had killed nearly all of his family members, and cut off both his arms a few years earlier, which is why he could not use the gun. He had concealed the dismemberment by always wearing a shawl.

Living in Ramgarh, the lively Veeru and cynical Jai find themselves growing fond of the villagers. Veeru is attracted to Basanti (Hema Malini), a feisty, talkative young woman who makes her living by driving a horse-cart. Jai is drawn to Radha (Jaya Bhaduri), Thakur's reclusive, widowed daughter-in-law, who subtly returns his affections.

Skirmishes between Gabbar's gang and Jai-Veeru finally result in the capture of Veeru and Basanti by the dacoits. Jai attacks the gang, and the three are able to flee Gabbar's hideout with dacoits in pursuit. Fighting from behind a rock, Jai and Veeru nearly run out of ammunition. Veeru, unaware that Jai was wounded in the gunfight, is forced to leave for more ammunition.

Meanwhile, Jai, who is continuing the gunfight singlehandedly, decides to sacrifice himself by using his last bullet to ignite dynamite sticks on a bridge from close range.

Veeru returns, and Jai dies in his arms. Enraged, Veeru attacks Gabbar's den and catches the dacoit. Veeru nearly beats Gabbar to death when Thakur appears and reminds Veeru of the promise to hand over Gabbar alive. Thakur uses his spike-soled shoes to severely injure Gabbar and destroy his hands. The police then arrive and arrest Gabbar. After Jai's funeral, Veeru leaves Ramgarh and finds Basanti waiting for him on the train. Radha is left alone again.

Based on 0 rating
0 user 0 critic
Did you know? The train robbery sequence took about 20 days to film on the Mumbai-Pune line, near Panvel. Read More
0 User Reviews
No reviews available. Click here to add a review.
Cast

Amjad Khan was almost dropped from the film because scriptwriter Javed Akhtar found his voice too weak for Gabbar Singh's role.

The train robbery sequence took about 20 days to film on the Mumbai-Pune line, near Panvel.

The backdrop of Gabbar Singh's hideout was formed by huge rocks of granite in Ramnagaram near Bangalore, India. The people of Ramnagaram renamed a hamlet in the town as Sippynagar after the director Ramesh Sippy.

Hema Malini is not any scenes with Sanjeev Kumar and Jaya Bhaduri because Sanjeev had just proposed to Hema, and she did not want to be near him.

This was the first film in the history of Indian cinema to celebrate a silver-jubilee (25-week) initial release at over 100 theaters across India.

A hand can be seen in the right hand corner holding the front wheel of Dharmendra 's bike.It is during the song " Koi Haseena" when Dharmendra does a pop wheely with his cycle.

The casting of Sholay was more or less finished even before the release of Zanjeer.

This movie was ranked first in the British Film Institute's 2002 poll of "Top 10 Indian Films" of all time.

Amjad Khan's calling one of his associates Sambha caught the fancy of not just moviegoers but also producers. Because of this, a producer promptly announced a movie titled "Sambha."
Buzz
Sholay to be screened at the 50th edition of International Film Festival of India
11 Nov 2019, by Bollywood Hungama News Network
41 years of Sholay
15 Aug 2016, by Devesh Sharma
‘Sholay’ completes 40 years: From ‘kitney aadmi thhe’ to ‘suar ke bachcho’ – iconic dialogues from the cult classic
13 Aug 2015, by Indian Express 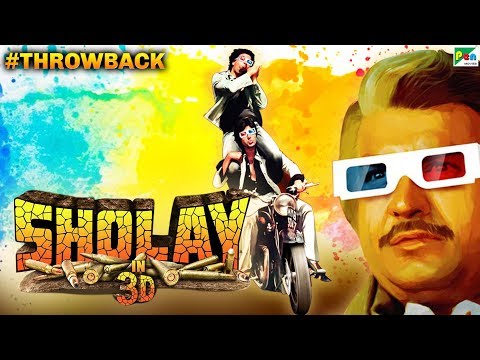 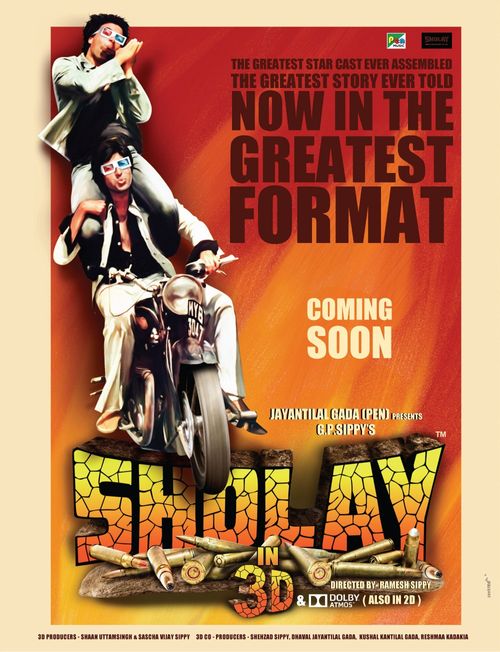 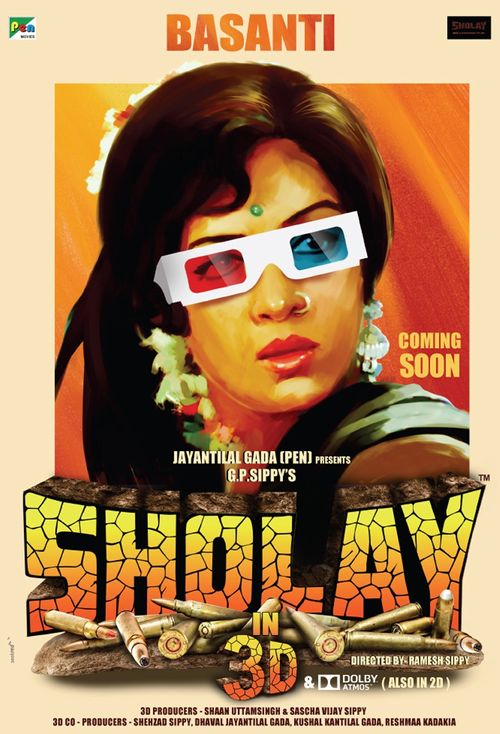 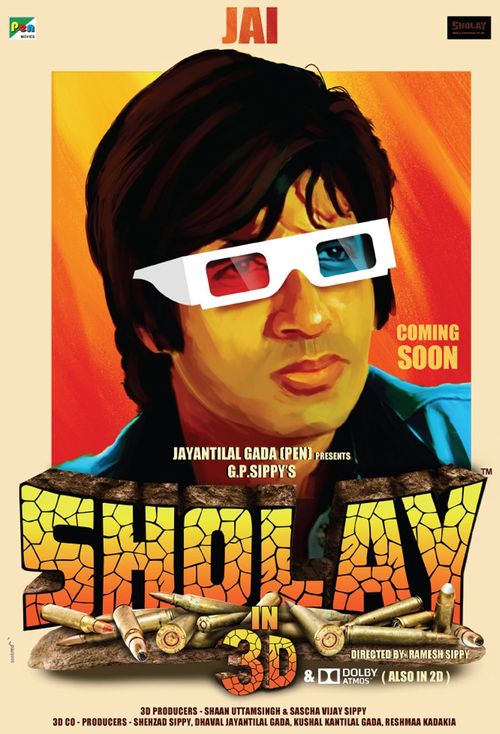 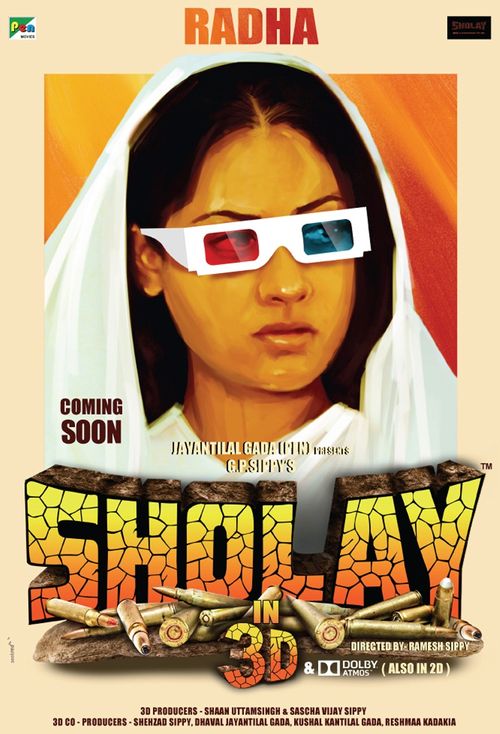 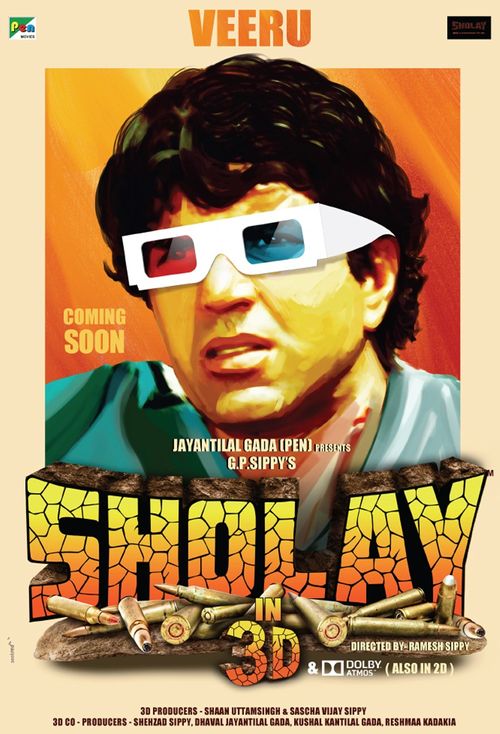 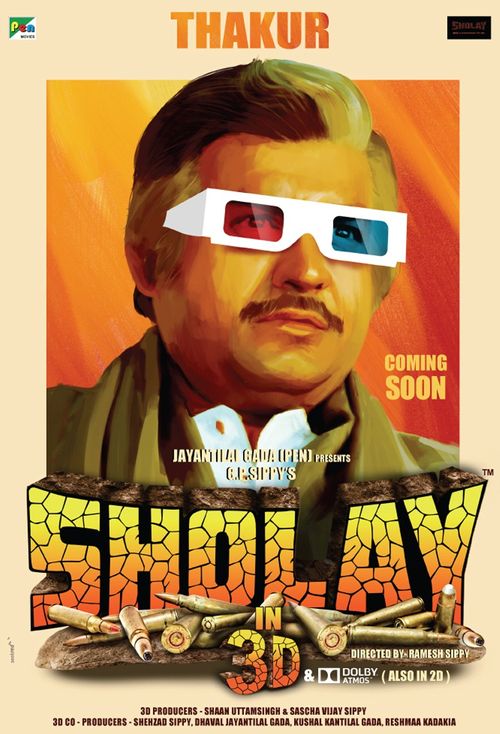 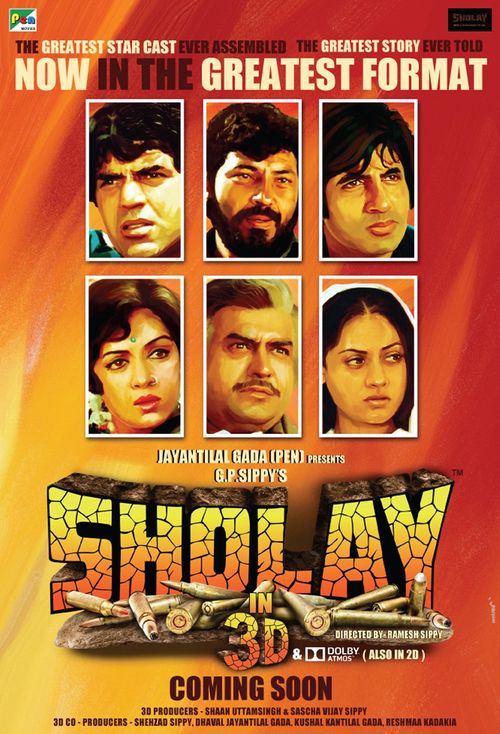