Cancel
Four slackers and con-men namely: Boman Contractor, who lives a wealthy lifestyle with his eccentric dad, Nari, who loves his antique car more than his son, and asks his son to leave when he damages the car; hot-headed Aditya and dim-witted Manav, orphaned brothers; and Deshbandhu Roy, a trickster who wears a magnetized belt; share a room with a lenient landlady, who eventually gives up on them and kicks them out. After a number of con tricks, the group are arrested by the Police, but released in the countryside. At this point they witness a car plummet down a cliff, with it's sole occupant, Bose, an underworld don, who, before dying, tells them that he has hidden 10 Crore Rupees in cash in the St. Sebastian's Garden, Goa, and if they find it, it is their's to keep. The group race toward Goa in Contractor's stolen car, little knowing that their plans will soon be foiled, albeit hilariously, by Police Inspector Kabir Nayak, who is angered at this Department for not appreciating his honesty, and is instead penalizing him by transferring him to Yavatmal; a bus hijacker-cum-bandit named Baabubhai, who holds Deshbandhu hostage, and Nari Contractor, who wants the money to repair his now completely damaged car. All want an equal part of the bounty, and each and everyone of them will do anything, even break-up their friendship, rules, laws, and regulations in order to try and keep the cash for themselves, and eventually end up in a race, using a wide assortment of vehicles, and even an airplane, with the winner(s) keeping the entire amount for themselves.
See Storyline (May Contain Spoilers)

Dhamaal, as the name suggests, is a fun filled caper about four friends - Deshbandhu Roy aka Roy (Riteish Deshmukh), who believes that he was born to be the best detective in the world; Manav Shrivastav (Javed Jafferey), who actually happens to be the biggest idiot in the world, but is blissfully unaware about it and his elder brother, Aditya Shrivastav aka adi (Arshad Warsi), whose encyclopedic half knowledge about everything only adds to the great expertise of this group; the final component of which is Mr. Scared of everything, Boman Contractor (Aashish Chowdhury), whose greatest fear is his father, Nari Contractor (Asrani). These four lovable idiots live and work together. Their idea of work? Doing small time con jobs! The thought of earning an honest living has never even crossed their minds. So one day while trying to save a dying man, Bose (Prem Chopra), they get their big break. He tells them about hidden millions as he takes his last breath. They are ecstatic! Easy Money! Their life is MADE! Here begins their misfortunes! Police Inspector, Kabir Nayak (Sanjay Dutt) has been chasing Bose for the last ten years. He finally finds him. Only dead! Desperate for his promotion, he questions the suspicious looking foursome he finds next to the body. When they manage to give him the slip, begins the Chase... One misadventure follows after another. All five are thrown into hilarious life threatening situations that has the audience in side splitting laughter and guessing - Is there really any hidden money? Who will get it first? Its sheer masti and DHAMAAL.

Based on 0 rating
0 user 0 critic
Did you know? One of the film's scenes is inspired from the American western The Good The Bad And The Ugly (1966). Read More
0 User Reviews
No reviews available. Click here to add a review.
Cast

Suhasini Mulay
as The Landlady

One of the film's scenes is inspired from the American western The Good The Bad And The Ugly (1966). 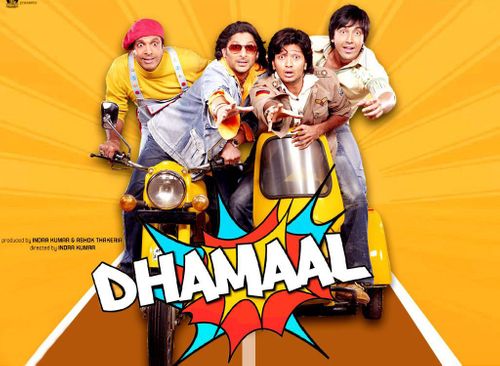