Cancel
In 1970s San Diego, journalism was a well respected profession and people actually cared about what they saw on TV. And the top rated anchor man in the city is Ron Burgundy. He enjoys his run at the top, and has for the last five years. And his news team is equally as good as he is. Professional jock and former professional baseball player Champ Kind handles the sports, the curiously dim witted Brick Tamland - who's a few channels short of a cable subscription - handles the weather, and ladies' man Brian Fantana - whose collection of fine scents would be in the Guinness Book Of Records - handles the on-field reporting. But now all that is about to change forever. His network Channel 6 has embraced diversity and has hired a beautiful new female anchor named Veronica Corningstone. While Ron Burgundy and the rest of the Channel 6 news team enjoys fighting with competitors, drinking, and flirting with the ladies, Veronica quietly climbs her way to the top. And Veronica's success drives ...
See Storyline (May Contain Spoilers)

In the mid-1970s, Ron Burgundy (Will Ferrell) is the famous anchorman for a local San Diego television station, fictional KVWN channel 4. He works alongside his friends on the news team: lead field reporter Brian Fantana (Paul Rudd), sportscaster Champ Kind (David Koechner), and intellectually disabled chief meteorologist Brick Tamland (Steve Carell). Station director Ed Harken (Fred Willard) notifies the team that they have maintained their long-held status as the highest-rated news program in San Diego, leading them to throw a wild party, where Ron unsuccessfully tries to pick up a beautiful, blonde woman (Christina Applegate). Ed later informs the team that they have been forced to hire Veronica Corningstone, the same woman whom Ron tried to pick up. After a series of inept attempts by the team to seduce her, she finally relents and consents to a "professional tour" of the city with Ron, culminating in a sexual relationship. Despite agreeing to keep the relationship discreet, Ron announces it on air.

After a dispute with a motorcyclist (Jack Black) involving Ron's dog, Baxter, being punted off the San Diego–Coronado Bridge, Ron is late to work. Veronica fills in for him on-air, and the couple break up. Veronica is made co-anchor, to the disgust of the team, and the two co-anchors become fierce rivals, both on and off the air. Depressed, the news team decides to buy new suits, but Brick, who was leading the way, gets them lost in a shady part of town. Confronted by competitor Wes Mantooth (Vince Vaughn) and his news team, Ron challenges them to a fight. However, when several other news teams converge on the site, a full-on melee ensues, broken up only by police sirens. Realizing that having a woman as a co-anchor is hurting their reputation, Ron gets in another heated argument with Veronica, and they get in a physical fight after she insults his hair, increasing tensions even more.

One of Veronica's co-workers tells her that Ron will read anything written on the teleprompter, so she sneaks into the station and changes the text. The next day, Ron—oblivious to what he is saying—concludes his broadcast with, "Go fuck yourself, San Diego!", instead of his usual closing line, "You stay classy, San Diego!" which subsequently provokes an angry mob outside the studio, and Ed has to fire Ron. Realizing she went too far, Veronica tries apologizing, but Ron angrily dismisses her. Ron becomes unemployed, friendless, and heavily antagonized by the public. Meanwhile, Veronica enjoys fame, although her male co-workers hate her. Ed tells Champ, Brick, and Brian that they may not talk to Ron or they will be fired. When a panda is about to give birth, all the news teams in San Diego head to the zoo to cover the story. In an attempt to sabotage her, a rival news anchor (Tim Robbins) pushes Veronica into a Kodiak bear enclosure. When Ed cannot find Veronica, he recruits Ron. Once at the zoo, Ron jumps in the bear pen to save Veronica, as the public watches helplessly. The news team then jumps in to save Ron. Just as a bear is about to attack, Baxter, who miraculously survived, appears and convinces the bear to spare them. As the group climbs out of the pit, Wes Mantooth appears and holds the ladder over the bear pit, threatening to drop Ron in, and tells him that deep down, he has always hated him, but suddenly pulls Ron to safety as he also respects him.

After Ron and Veronica reconcile, it is shown that in years to come, Brian becomes the host of a Fox reality show named Intercourse Island, Brick is married with 11 children and is a top political adviser to George W. Bush, Champ is a commentator for the NFL before getting fired after being accused by Terry Bradshaw of sexual harassment, and Ron and Veronica are co-anchors for the CNN-esque World News Center.

Tagline: If Ron Burgundy says it... it's the truth!

Based on 0 rating
0 user 0 critic
Did you know? Will Ferrell's Saturday Night Live (1975) costar plays the bass at the spanish restaurant when Ron plays the flute. Read More
0 User Reviews
No reviews available. Click here to add a review.
Cast

Will Ferrell
as Ron Burgundy

Scot Robinson
as Waiter at Tino's

Miscellaneous
The colognes and lotions in the Sex Panther cologne scene is from the 2000s and not the 1970s.

Miscellaneous
The lint roller that is used to clean off the back of Ron's blazer during the opening credits was only patented in 1983. Later than the time frame the actual movie is set in.

Miscellaneous
Ron sprays himself with pepper-spray during his fight with Veronica in the office. Pepper-spray wasn't introduced until the 1980s.

Miscellaneous
The helicopter that dropped off Ron Burgundy in the opening scene wasn't built until 1981 as it bore the number "N".

Continuity
While talking to Baxter, the poition of Ron's coat changes.

Continuity
There is a change in the position of the crowd during Veronica and Ron's fight scene.

Continuity
The positions of the pencils are neatly arranged in the shot where Ed is talking about diversity. In the next shot they are all scattered.

Continuity
Brian Fantana's initial action suggest that he was to bang his right fist on Ed's desk but in the long shot he bangs his left hand.

Crew/Equipment Visible
The nozzle of the flame projector is visible in one the shots when Ron blows fire from the end of his flute.
Trivia:
The role of Brin Fantana was auditioned for by Ron Livingston, but ended up going to Paul Rudd.

Will Ferrell's Saturday Night Live (1975) costar plays the bass at the spanish restaurant when Ron plays the flute.

Lime prop is the name of one of Brian Fantana's colognes.

This movie was inspired by a show that Will Ferrell had seen about Jessica Savitch, and how one of her male coworker confessed to being a chauvinist.

Paul Thomas Anderson was initially a producer in this project.

The role of Veronica was auditioned for by Maggie Gyllenhaal.

The street fight scene contains 23 people in it. 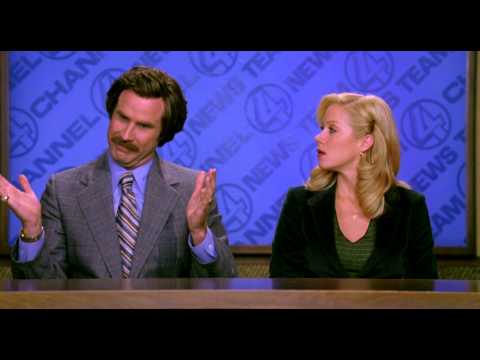 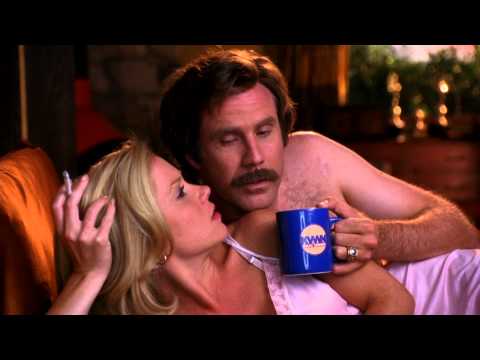 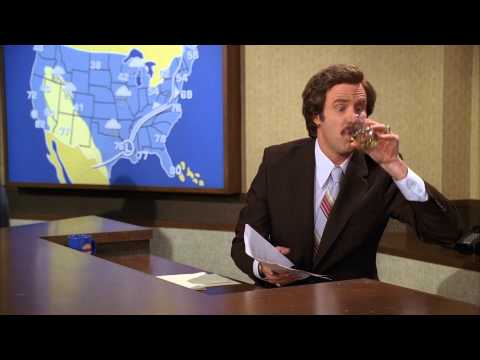 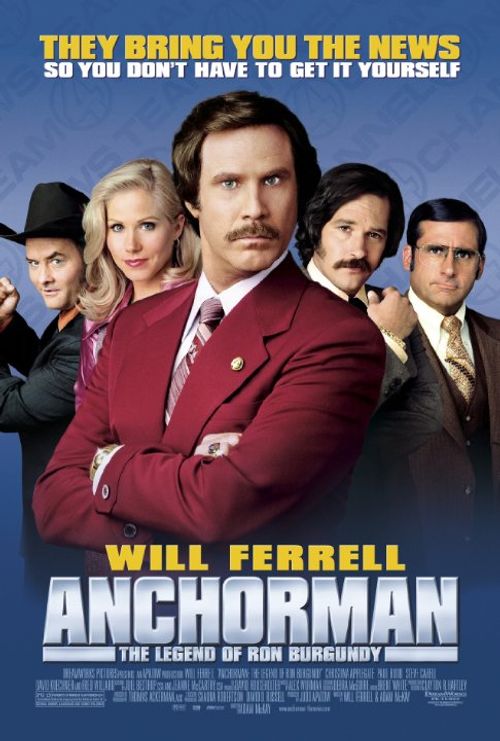 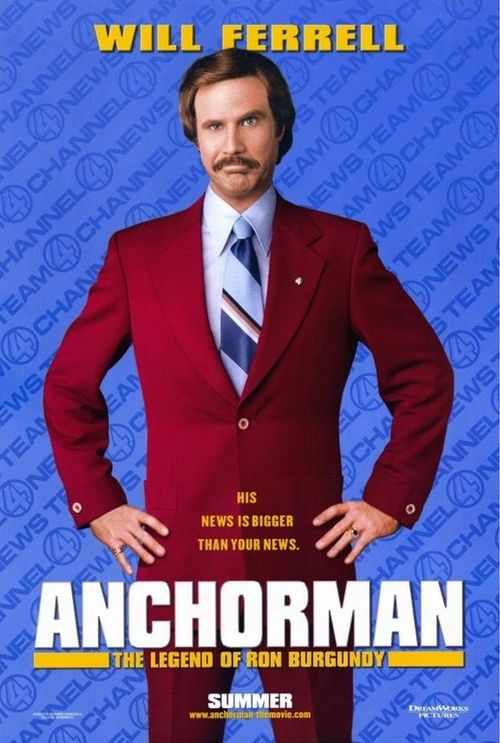 Anchorman - The Legend Of Ron Burgundy 2004