Cancel
'Andaz Apna Apna' is a refreshingly funny and satirical take on modern materialistic society, blended together with fantastic music and wonderful acting. Murli Manohar is a barber in a small town in India. He would like his son, Amar, to take over his business. But Amar is a slacker and a day-dreamer, who dreams of making it big in Bollywood movies and getting rich quick. When Amar finds out that a rich heiress, Raveena, is looking for a groom to marry, he decides to go and try his luck. On the way there, he meets with another slacker by the name of Prem, who is the son of a tailor named Bankeylal Bhopali. Prem is also on his way to meet Raveena and attempt to convince her to marry him. When both find out that they are after the same woman, they decide to outdo each other to win over Raveena's affections. Unsure of whom she is going to marry and wishing to find true love without the temptation of her wealth, Raveena asks her secretary, Karisma, to pose has herself, while she assumes her name. Who will win the heart of the heiress? Will the advent of true love inspire the con-men to mend their ways and fulfill their true potential as human beings?
See Storyline (May Contain Spoilers)

It's a story of two men competing for the hand of an heiress get drawn into love – and into trying to save her from an evil criminal. Amar (Aamir Khan) and Prem (Salman Khan) are two daydreamers with a common aim: getting rich by marrying a rich heiress, Raveena Bajaj (Raveena Tandon), daughter of Ram Gopal Bajaj (Paresh Rawal). The guys run into each other on a bus and soon realise that they have a common goal. The duo fail at various attempts to woo the lady.

Finally, they decide to insinuate themselves in her house. Amar pretends to be a guy who has lost his memory after getting hit by Raveena, while Prem pretends to be a doctor. The boys don't know that Raveena's secretary Karishma (Karisma Kapoor) is the real Raveena and Raveena's actual name is Karishma. Raveena switched her identity because she wanted to find a boy who will love her, not her money.

Nobody is aware that Ram Gopal has a twin brother called Shyam Gopal Bajaj aka Teja. Teja is a criminal who has taken lots of money from Crime Master Gogo (Shakti Kapoor). Teja hopes to land the riches himself by kidnapping his brother and posing as Ram. He has also planted his cronies Robert (Viju Khote) and Bhalla (Shehzad Khan) in the household.

Ram arrives in India, and Teja plans to steal Ram's money converted in diamonds. Here, Ram sees through the real nature of Amar and Prem, thus declining Raveena's marriage to either of them. The duo plan to fake a kidnapping where they will heroically "rescue" Ram. Unknown to them, Teja has planned to kidnap Ram as well.

Teja succeeds in having Ram kidnapped. The boys go to rescue Ram, but Teja makes them believe that he is Ram and finally enters Ram's household. Initially, nobody suspects a thing, but the girls soon smell a rat. The boys have discovered real identities of the girls. Prem has fallen for real Raveena while Amar has fallen for real Karishma.

The girls tell their suspicions to the boys. The boys tail Teja and soon find out the truth. Here, Ram tricks Teja and escapes the prison. However, the boys mistake him for Teja, resulting in Ram being imprisoned again – with Amar and Prem. However, Amar and Prem succeed in convincing Robert and Bhalla that Ram is actually Teja.

The boys, along with Robert and Bhalla, stop Teja. However, Ram is kidnapped along with Raveena and Karishma. The climax takes place in Gogo's lair, where the boys try to control the situation along with Ram. In a comic standoff, the real motive of each villain is revealed. However, due to the smartness of the boys, police raid Gogo's lair, thus rounding up all the criminals. Ram finally decides to have the girls married to Amar and Prem.

Based on 0 rating
0 user 0 critic
Did you know? Shehzad pays a unique tribute to his father Ajit, a legendary villain, by adopting his mannerisms and voice for the negative character played in the film. Read More
0 User Reviews
No reviews available. Click here to add a review.
Cast

Continuity
In the climax when Aamir tells Crime master Gogo more about his childhood expression, Gogo in a long shot holding a gun on his right hand happily shouts to everyone about what others were thinking about him. A close-up is followed afterwards and it is visibly clear that Gogo is holding the same gun on his left hand without revealing why and how.

Continuity
Salman Khan's hairstyle keeps changing throughout the film as it was in making for 3 years, In many scenes he has long hair of Saajan Days while in some scenes he has the short hair he had during HAHK days

Miscellaneous
In the scene where Anand Akela shows Prem his token for the interview, Prem places it on the table. All three characters are shown to move away at the end of the scene, but Anand doesn't pick his token back. He reveals much later that he has given up hope of marriage to Raveena, but its only after their attempt to foil the plans of other hopefuls.
Trivia:
Aamir Khan said in an interview that he was very unhappy with Salman Khan during the making of the film because he kept arriving late to the set. Aamir decided to never work with Salman again. Ironically, the two ended up becoming best friends.

Shehzad pays a unique tribute to his father Ajit, a legendary villain, by adopting his mannerisms and voice for the negative character played in the film.

Despite performing poorly at the box office, the film has since then has gathered a cult following.

None of the film's stars were on talking terms during the making of the film.

The film includes numerous references to the classic movie Sholay (1975). 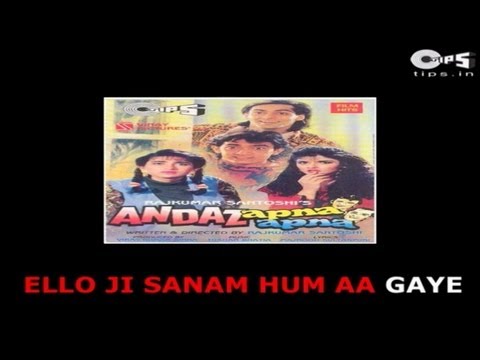 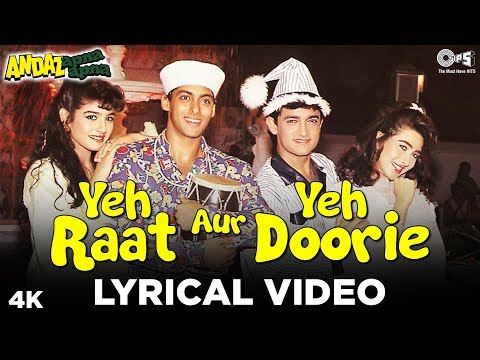 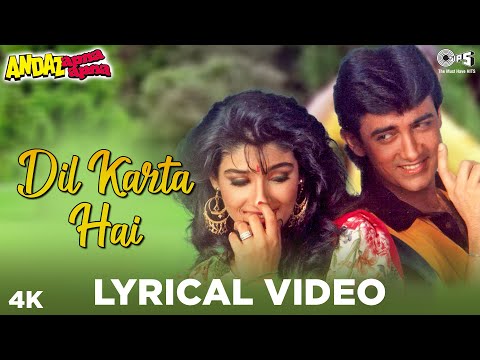