Cancel
An auto rickshaw driver is forced to reveal his dark past when an old rival returns back and threatens to destroy his family.
See Storyline (May Contain Spoilers)

Manikkam is a humble auto driver who helps the needy. He also keeps away from unnecessary fights and quarrels. His ambition is to bring up his brother and sisters with flying colours. His brother Shiva gets through the police training and waits for posting.

Manikkam meets Priya, a rich girl who travels frequently in his auto. She develops a respect and feelings for him due to his nobility.

Shiva attends his interview and he is asked to bring his brother to office by a senior official when he hears the name Manikkam and Shiva's birthplace is Bombay. Hesitating at first, Manikkam goes to commissioner's office. Manikkam's sister who had passed with more marks requests a medical seat to a medical college proprietor.

The proprietor demands that she sleep with him and stay in his guest house. Hearing about this Manikkam meets the guy. He surprises his sister when he makes the proprietor bow to him and readily to give seat without any condition. He also surprises his brother when he attacks the area Don who teased his sister. The men attacked by Manikkam are critical in the hospital. Shiva inquires Manikkam about his past life in Bombay. The film then goes into a flashback about Manikkam's life at Bombay.

The flashback shows that Manikkam was actually once a Don named Manik Baashha in Bombay. He had a great friend Anwar Baasha (Charan Raj). They were great friends despite being from different religions. Once Anwar questions the activities of the Mafia Don Antony. Events lead to Antony's men killing Anwar on the main road. Manikkam is saved due to the pleas of his father (Vijayakumar), who works as the personal assistant of Antony.

Manikkam vows to avenge his dear friend's death. He does so by murdering all those responsible before even his friend is laid to rest. The people of Mumbai also come to his support and claim they have not seen any murder occur to the police. Manikkam soon becomes Manik Baashha, the Don – a "Robin Hood" kind of a Don. He is greatly revered by the people. But situations lead him to direct confrontation with Mark Antony.

Antony convinces an assistant of Baashha to murder him on his birthday. But Baashha cleverly recognises the plot and his foes end up shooting a wax model of him. The assistant is evicted and he later appears in the movie as the father of Manikkam's fiancée.

Meanwhile, Antony goes desperate in his attempts to quell the Baashha challenge. The only option left with him is to kill Baashha's father. His loyalty notwithstanding, Antony proceeds with that. Baashha on the other hand aids the police in the arrest of Antony. He also promises his father before his death to forgo all illicit activities and return to Chennai to lead a peaceful life. He makes the media and the police believe that he has died in an accident.

Meanwhile Priya proposes to Manikkam. Her dad arranges for a marriage with one of his men against Priya's wishes. She begs for Manikkam to save her life else she will kill herself.

On the day of marriage Manikkam deeply thinks and finally decides to save Priya. He reaches the marriage hall and shows his hand to Priya. Priya is surprised when her dad did not show sign of opposing and is not aware of the fact that her father is familiar to Manikkam as Baashha. Priya's dad lets them go. An underling informs Mark Anthony that Manikkam is alive.

Antony escapes from Bombay jail and kills Kesavan for killing his family for money. He kidnaps Manikkam's family before Manikkam comes to their rescue. In the struggle Manikkam loses one of his friends. Manikkam rescues his family from Antony and chases him. Just as he was about to kill Antony he was stopped by a senior police official. The story ends with Antony trying to shoot Manikkam but instead being shot dead by Shiva.

Tagline: When Badsha says once, it will echo a hundred times.

Based on 11 ratings
3 user 0 critic
Did you know? This film's Muhurat shot took place at AVM Studios at a venue which later came to be known as the Rajni Pillaiyar Temple. Read More
3 User Reviews

Miscellaneous
One of the promises that Manikam makes to his dying father is to get a Medical College seat for his younger sister without letting anyone know about Manikam's secret identity, but he uses his identity to threaten the principal for the same reason which eventually breaks the promise.
Trivia:
Actress Nagma was the original choice for the lead role after director Suresh Krissna was impressed with her performance in Kadhalan.

The film completed 368-day run at the box office.

The film is a revised adaptation of Amitabh Bachchan starrer "Hum" and it took inspiration from Mammootty starrer "Samrajyam".

This film borrows the background score used by Brad Fiedel in the 'Terminator' series.

This film's Muhurat shot took place at AVM Studios at a venue which later came to be known as the Rajni Pillaiyar Temple.
Buzz
Superstar Rajinikanth fans make France a mini Tamil Nadu as they celebrate Baasha’s re-release – watch video
04 Mar 2017, by Anusha Iyengar
Baasha’s remastered version has Rajinikanth driving an OLA auto in 1995. We are serious.
03 Mar 2017, by Sreeju Sudhakaran
Grand release for Baasshaa's remastered version
01 Mar 2017, by Padma Iyer
Rajinikanth's Baassha from March 3
17 Feb 2017, by Ambili S
Digitally re-mastered Baasha gearing up for January release
24 Dec 2016, by Only Kollywood
Baasha gets a re-release
23 Aug 2016, by Ambili S 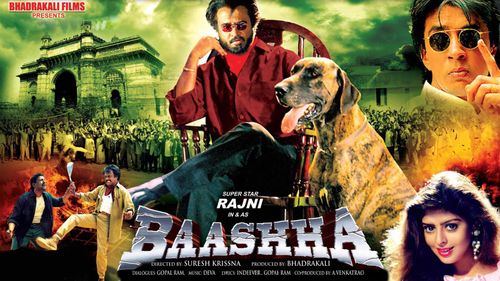 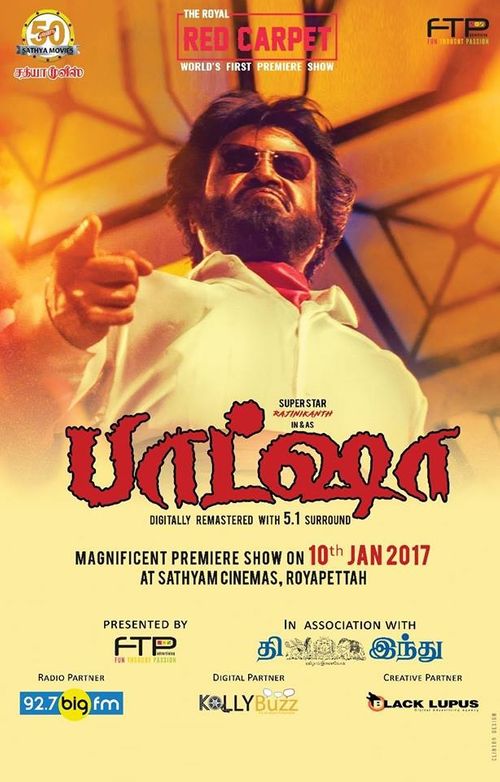 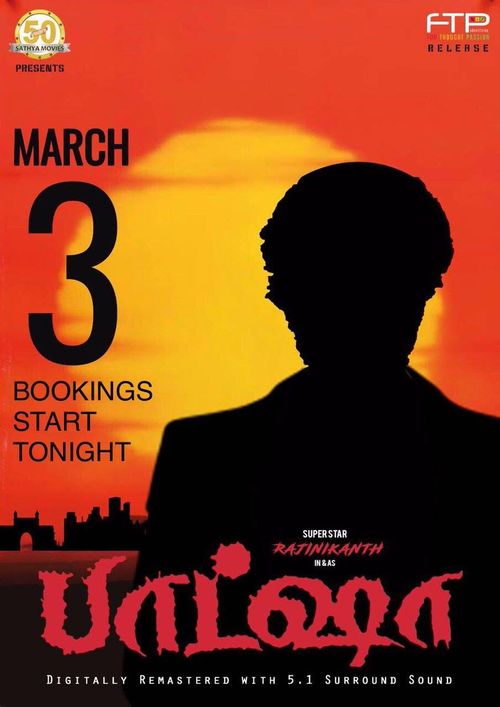 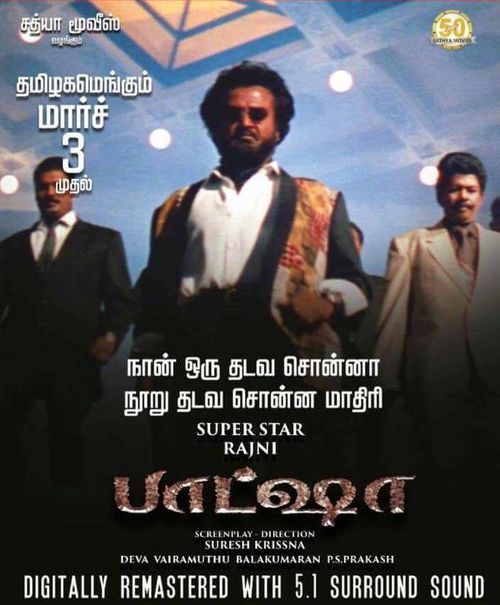 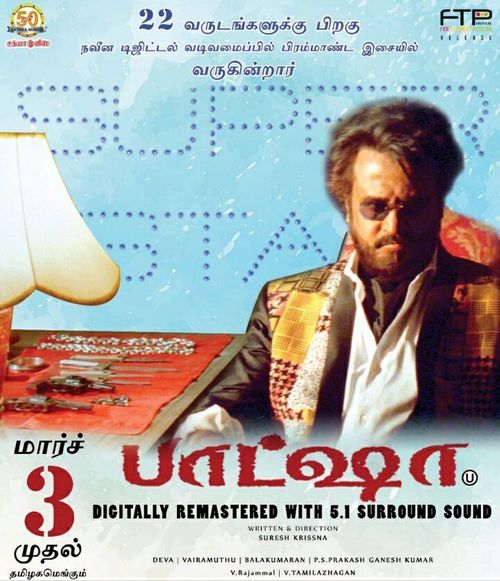 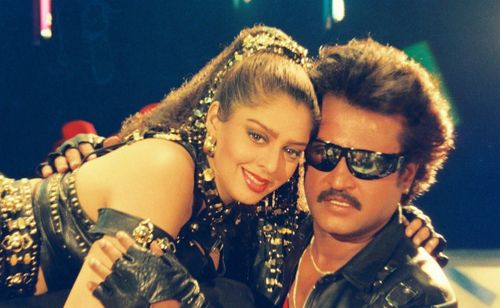 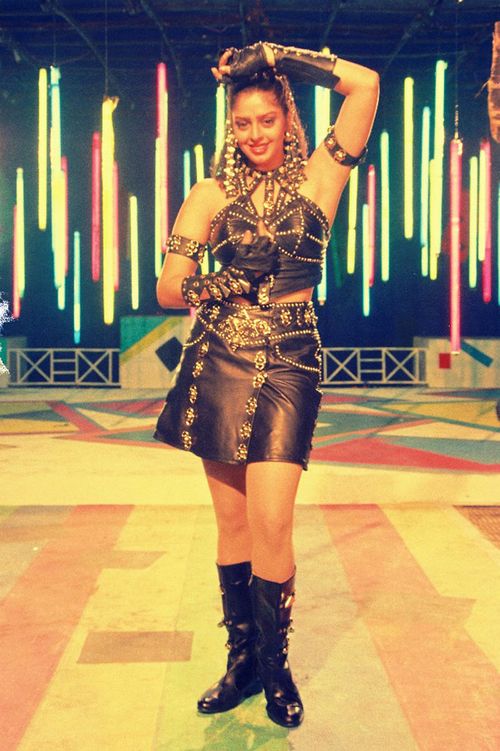 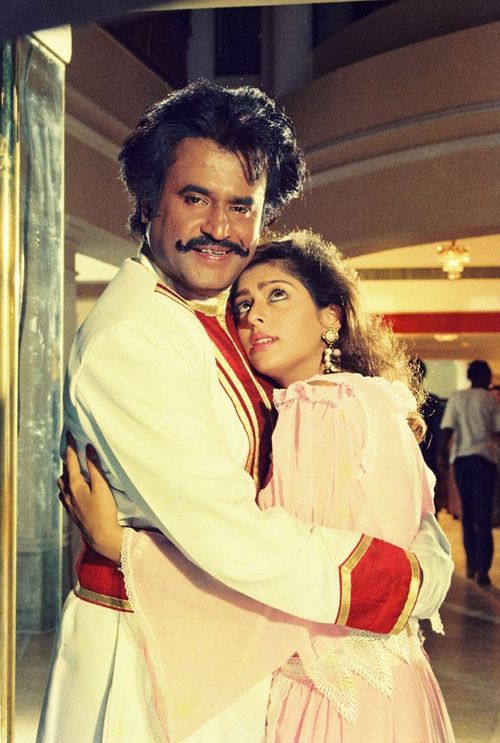 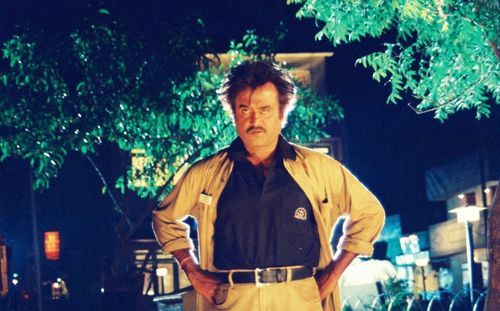 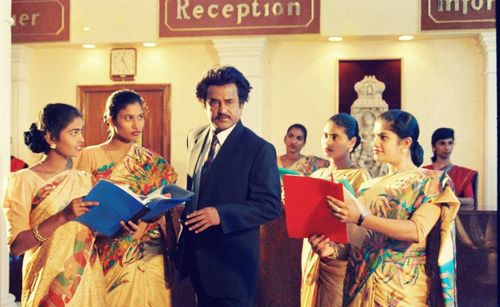