Cancel
Lake Victoria's annual Spring party by 50,000 young revelers is about to turn into a feeding frenzy with prehistoric hunger-pains. With knee-trembler's above the waves and tremors below, released from their dormant sleep, thousands upon thousands of flesh-eating nippers are released into the lake with whetted appetites and razor-sharp teeth. With a motley crew of strangers thrown together to defend these shores, it is now up to them to prevent the largest eat-out in human, and piranha, history.
See Storyline (May Contain Spoilers)

Fisherman Matt Boyd (Richard Dreyfuss) is fishing in Lake Victoria when a small earthquake hits, splitting the lake floor and causing a whirlpool. Boyd falls in and is ripped apart by a school of piranhas that emerge from the chasm.
Jake Forester (Steven R. McQueen) is admiring attractive tourists as spring break begins. He reunites with his old crush, Kelly (Jessica Szohr) and meets Derrick Jones (Jerry O'Connell), a sleazy pornographer, as well as Danni Arslow (Kelly Brook), one of his actresses. Derrick convinces Jake to show him good spots on the lake for filming a pornographic movie. That night, Jake's mother, Sheriff Julie Forester (Elisabeth Shue), searches for the missing Matt Boyd with Deputy Fallon (Ving Rhames). They find his mutilated body and contemplate closing the lake. However, this decision is made difficult by the two thousand partying college students on spring break, who are important for bringing revenue to the small town. The next morning, a lone cliff diver is attacked and consumed by the marauding fish.
Jake bribes his sister and brother, Laura (Brooklynn Proulx) and Zane (Sage Ryan), to stay home alone so that he can show Derrick around the lake. After Jake leaves, Zane convinces Laura to go fishing on a small sandbar island. They forget to tie the boat down and are stranded in the middle of the lake. Meanwhile, Jake goes to meet with Derrick and runs into Kelly, who invites herself onto Derrick's boat, The Barracuda. Jake meets Crystal Shepard (Riley Steele), another one of Derrick's actresses, and cameraman Andrew Cunningham (Paul Scheer).
Julie takes a team of seismologist divers—Novak (Adam Scott), Sam (Ricardo Chavira), and Paula (Dina Meyer)—to the fissure. Novak speculates that the rift leads to a buried prehistoric lake. Paula and Sam scuba dive to the bottom and discover a large cavern filled with large piranha egg stocks. Both are killed by the piranhas before they can alert the others to the discovery. Novak and Julie find Paula's corpse and pull it onto the boat, capturing a lone piranha, which they take to Carl Goodman (Christopher Lloyd), a marine biologist who works as a pet store owner. He explains that it is a super aggressive prehistoric species, long believed to be extinct.
Julie, Novak, Fallon, and Deputy Taylor Roberts (Jason Spisak) try to evacuate the lake, but their warnings are ignored until the piranhas begin to attack the tourists. Novak boards a jet-ski with a shotgun to help while Fallon drags people to shore and Julie and Taylor try to get swimmers into the police boat. Almost everyone in the lake is either wounded or killed by the piranhas or panicking guests attempting to escape.
Meanwhile, Jake spots Laura and Zane on the island, and forces Derrick to rescue them. Derrick crashes the boat into some rocks, flooding the boat's lower deck, and causing the boat to start sinking. Kelly is trapped in the kitchen while Derrick, Crystal and Andrew fall overboard from the impact of the collision. Crystal is devoured and Andrew escapes to shore. Meanwhile, Danni manages to get a partially eaten Derrick back on board.
Deputy Fallon makes a last stand, taking a boat motor and using its propeller to shred many piranhas, though he is presumably killed. After the chaos settles, Julie receives a call from Jake pleading for help. Julie and Novak steal a speed boat and head off towards the kids. They reach Jake and attach a rope to his boat. Julie, Danni, Laura, and Zane start crossing the rope, but the piranhas latch onto Danni's hair and devour her. The others make it across safely, but the rope comes loose. Using Derrick's corpse as a distraction, Jake ties the line to himself and goes to save Kelly. He ties Kelly to him and lights a flare after releasing the gas from a pair of stored propane tanks. Novak starts the boat and speeds away just as the piranhas surround Kelly and Jake. They are dragged to safety as the propane tanks explode, destroying the boat and killing most of the piranhas.
Mr. Goodman calls Julie on the radio, and Julie tells him that they seem to have killed the majority of the piranhas. A horrified Goodman tells her that the reproductive glands on the piranha they obtained were not mature, which means that the fish they were fighting were only the babies. As Novak wonders aloud where the parents are, a human sized piranha leaps out of the water and eats him.

Tagline: This summer, how fast can you swim?

Based on 0 rating
0 user 0 critic
Did you know? For the movie 1,112 boats were used for the spring break massacre set piece. Read More
0 User Reviews
No reviews available. Click here to add a review.
Cast

Revealing Mistakes
In the scene where the paragliding girl is about to be attacked by the Piranhas there is a set of close up shots where you see her in the water up to the waist. To do this in paragliding, you need to boat to be moving. However, in the shots, you can clearly see that the actress is motionless.

Character Error
When the movie ends the expert says the fish have underdeveloped sex organs and these fish are babies. However a fish's sex organs are internal and he wouldn't know this without dissection or a CAT scan.

Continuity
While the early part of the movie, Laura, the protagonist's young sister steps on a shard of glass at a beach, it is seen to bleed into the water and attract a nearby piranha. At the end part of the movie when Laura and her brother are saved and pulled into a boat she sits with both her feet soles in full view of the camera and there is no wound.

Continuity
At the very start of the movie, the Sheriff (Elisabeth Shue) falls into the water while investigating the missing boater. Shortly after that she is seen wearing a completely dry uniform.

Continuity
The topless parasailing girl is seen in the movie(Gianna Michaels) briefly has her top back on while being attacked.

Continuity
In the scene where Jake saw the tube empty, he swam to it. Shortly, when he was back on the boat, he is completely dry, including his shorts.

Continuity
Some of the teenagers seen in the movie have blood on their bodies before they are attacked.

Continuity
When Kelly Brook's character is being attacked by the piranha, the bites she receives appear and disappear between shots.
Trivia:
The scenes at the Pet Emporium were all shot in just one day.

Originally three boats were built for the Barracuda yacht.

The brand of tequila seen in the movie that they have on the Wild Wild Girls boat is Havasu Tequila. This is most visible during the body shots scene. Lake Havasu is where this was filmed.

The director filmed specifically for the trailers and TV spots.

Originally Chuck Russell was going to direct. He did however help rewrite the script with Josh Stolberg and Pete Goldfinger, as well as incorporating the original John Sayles script that Joe Dante directed the first time around.

Earlier Rob Huebel was considered for the role of Derrick Jones.

The film was not actually screened for critics, although, unusually in such circumstances, the critics actually liked it.

For this movie no cuts were demanded by the MPAA.

For the movie 1,112 boats were used for the spring break massacre set piece.

The film was shot in 2D and converted to 3D using the Reali-D conversion process developed by the company, Inner-D. Unlike other 3D converted films, Piranha 3D was always planned to be 3D.

The production crew to real estimated 75,000 gallons of fake blood which were used each day.

This film is the third time that director Alexandre Aja has directed a horror film remake. He previously directed The Hills Have Eyes (2006) and Mirrors (2008), also remakes of earlier horror films. 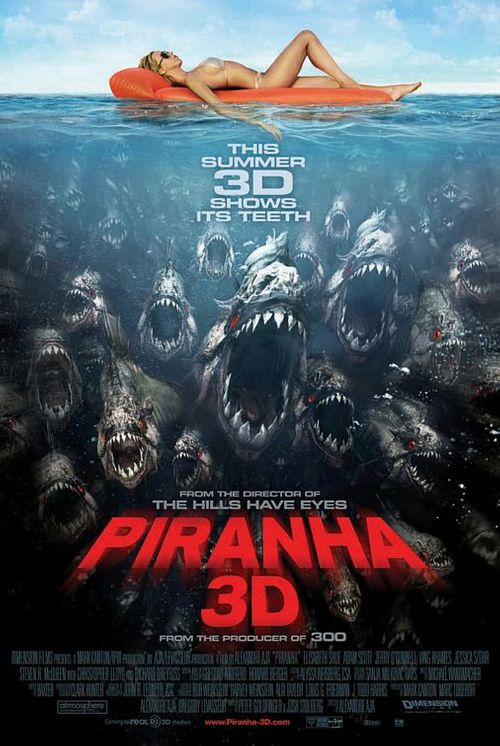 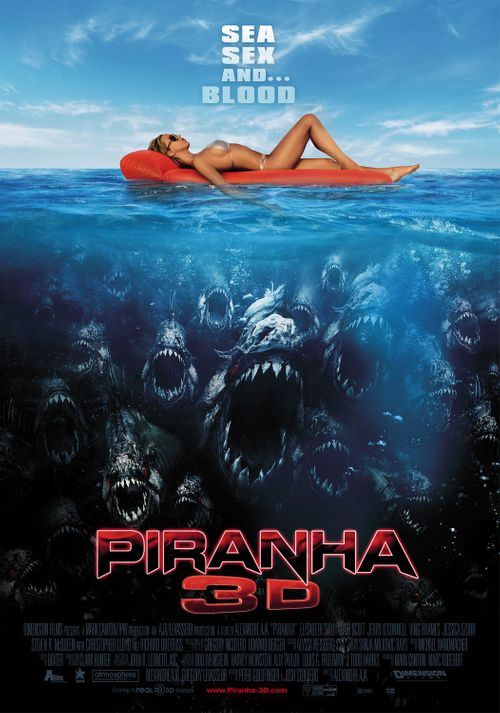 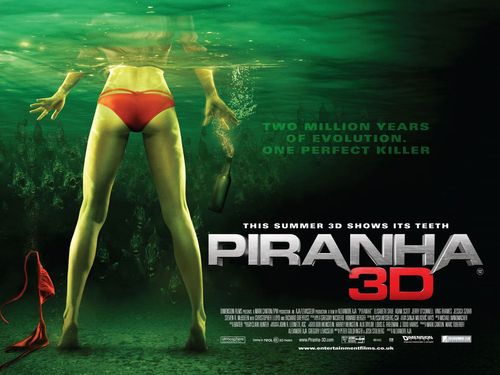 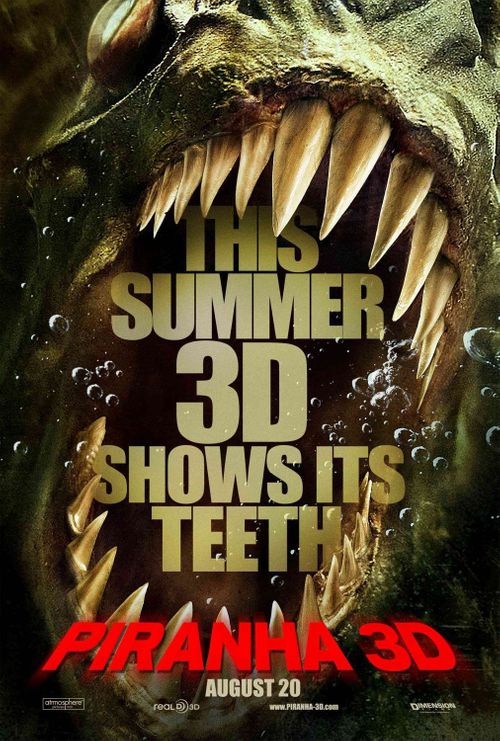