Cancel
Belonging to a prominent Uttar Pradesh-family of ruthless politicians, Samar Pratap is about to return to his Irish-American girlfriend, Sarah, in the U.S. and obtain a PhD, but cancels his trip when his father, Chandra, is shot dead. He decides to stay put and avenge this slaying but ends up dealing with aspiring politician, Indu Sakseria, who wants to wed him; his brother, Prithviraj, who has been granted control of the Rashtrawadi Party but is facing imprisonment on charges of Assaulting a Police Officer and Sexual Molestation; his cousin, Veerendra, who wants control of the party; and his astute maternal uncle, Brij Gopal - who secretly controls the entire family. Before he could even handle these situations, Sarah arrives in India and will soon accuse him of being a manipulative and conniving politician.
See Storyline (May Contain Spoilers)

The film begins with a quick flashback into the life of Bharti Rai (Nikhila Trikha), the daughter of chief minister Ramnath Rai (Darshan Jariwala). Influenced by leftist ideology, she rebels against her father and joins the rival party of leftist leader Bhaskar Sanyal (Naseeruddin Shah). Bharti develops an illicit relationship with Bhaskar, who, guilt-ridden over taking advantage of the younger woman, leaves for parts unknown, having unwittingly gotten Bharti pregnant. Upon the child's birth, he is abandoned in a boat by Brij Gopal (Nana Patekar), Bharti's brother. Bharti later marries Chandra Pratap (Chetan Pandit), the younger brother of Bhanu Pratap (Khan Jahangir Khan). Bhanu leads the Rashtrawadi political party.

The story then shifts to present, where, the state government collapses and Bhanu suffers a stroke. In the hospital, he hands over power to his brother Chandra. Chandra's son, Prithviraj Pratap (Arjun Rampal) tries to take advantage of his father's power and starts to impose his own decisions on the party, which results in a clash with Veerendra Pratap (Manoj Bajpai). Chandra also starts to take side with his son, sidelining Veerendra. When Prithvi rejects the nomination of a local leader, Sooraj Kumar (Ajay Devgan), who is chosen by the common people, Veerendra gives his support to Sooraj. Unknown to all, Sooraj is Bharti's abandoned son, who was found and raised by Pratap family's driver. Mashad Manzoor Memon..

Then comes the younger son of Chandra, Samar Pratap (Ranbir Kapoor) from America and meets his childhood friend and his family friend's daughter Indu Sakseria (Katrina Kaif). Indu loves Samar and thinks he loves her. When Chandra and Prithvi try to kick Veerendra out of his own father's party, he asks Sooraj for help. Sooraj ends up assassinating Chandra in his car, while he is returning from the airport after seeing off his younger son, Samar. In an ensuing drama, Prithvi is arrested by police under the influence of Veerendra and put on trial for raping a party worker (Shruti Seth). Samar comes to the rescue and tricks Veerendra into dropping all charges upon his brother, promising that his brother will resign and that he will move with his family to the U.S. However, Samar does not keep his promise and he, with Prithvi, begins rallying public support. After Bhanu officially expels Prithvi, the latter splits from the Rashtrawadi party and contests elections under "Jana Shakti party", a new party with Gopal as his mentor and Samar as the executive. Meanwhile Samar's American girlfriend Sarah (Sarah Thompson) arrives in India to see the situation. Samar dies or the new party, Samar shrewdly ensures Prithvi's marriage to Indu. Though Indu had always loved Samar, Samar only thought of Indu as a friend and loved Sarah.

The circumstances gets murkier with both sides trying every trick to ensure their victory in upcoming elections. Allegations and counter-allegations are made. Subsequently, Samar uncovers that the real murderers of his father are Sooraj and Veerendra, and decides to take revenge. On the other hand, Prithvi executes the former police officer, who had arrested him, and the woman worker at a farmhouse. Veerendra again seeks help from Sooraj and Sooraj makes a plan to assassinate Samar, being aware that Samar was behind all the tricks. Amidst of all the events, Indu realises her love for Prithvi and Prithvi accepts her love in return. Sarah is revealed to be pregnant with Samar's child; Samar promises Sarah that he will go to America with her and leave politics. A car bomb is planted in Samar's car. Prithvi goes to save Samar and Sarah, who were to be dropped off at the airport in that car. He manages to save Samar but is killed while trying to save Sarah in vain. Devastated by the loss of his brother and girlfriend, Samar decides to retaliate. He suggests Indu to take the reins of the party and arranges the election campaign single-handedly.

Meanwhile, Sooraj is revealed to be the first child of Bharti, who implores him to join his younger brother Samar. Sooraj refuses to part ways with Veerendra and asks his mother to leave. Exit polls predict a victory for Indu's party. On the counting day, Samar lures Veerendra and Sooraj to an unused factory by spreading a rumour about electronic voting machines being hacked. They fall in the trap, and Veerendra gets shot by Samar and his men. Sooraj requests Samar to leave him and Veerendra till they reach the hospital, but Veerendra dies on the way. Gopal prompts Samar to shoot Sooraj who questions the morality of the act, but Gopal convinces him to take revengefor the destruction of his family. Samar shoots Sooraj.

The election results are declared, and Indu emerges with majority and is made chief minister. Samar is seen asking forgiveness and is seen attempting reconciliation with Indu. They show Indu accepting Samar's apology and the two reconciling. Explaining his decision to return to America, he reflects that he always wanted to stay away from politics as politics is a game that brings out the "inner devil." Indu is revealed to be pregnant with Prithvi's child, while Samar leaves India to look after Sarah's mother and settle there.

Based on 0 rating
0 user 0 critic
Did you know? Katrina Kaif claimed she deserved a national award for her role but was mocked as she hardly had anything powerful to do in the film. Read More
0 User Reviews
No reviews available. Click here to add a review.
Cast

Vivek Oberoi was signed for Arjun Rampal' s role but later opted out.

The film was initially denied a certificate by the censor board as they believed that the lead character played by Katrina Kaif was inspired from Congress Party chief Sonia Gandhi and Rashtriya Janata Dal's chief Rabri Devi. Director Prakash Jha dismissed this allegation, saying his only inspiration was Mahabharata, the ancient Indian epic. 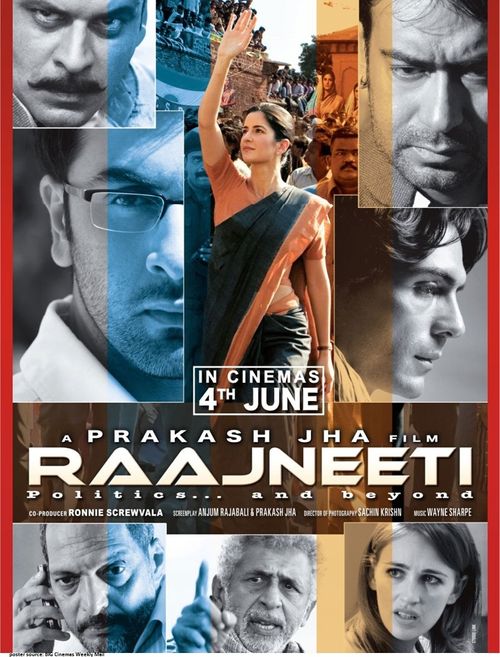 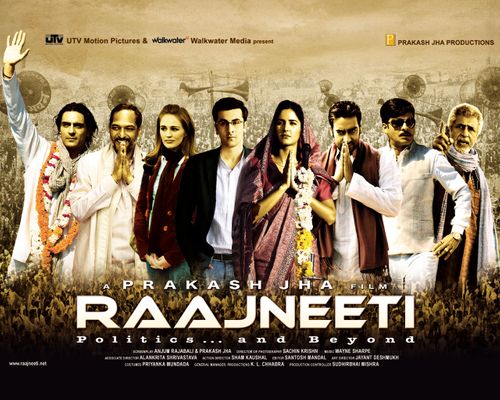 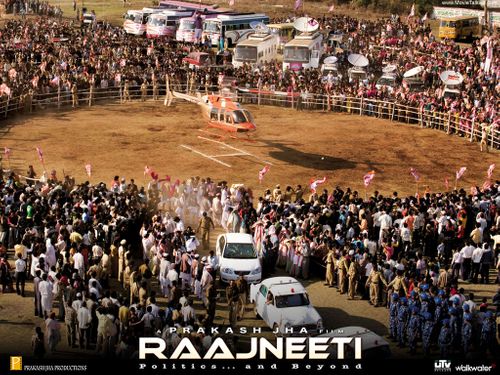 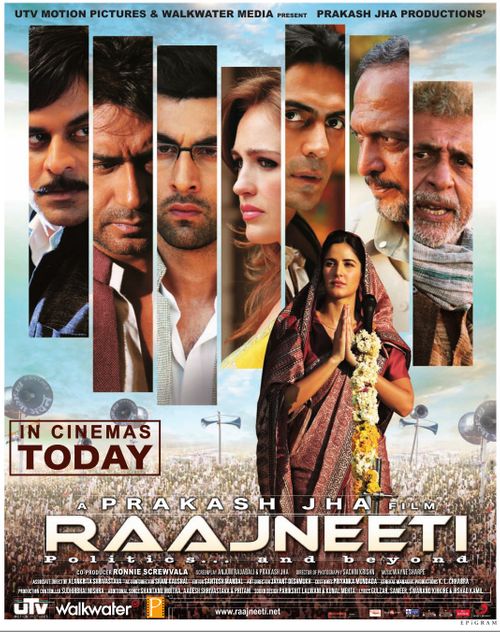 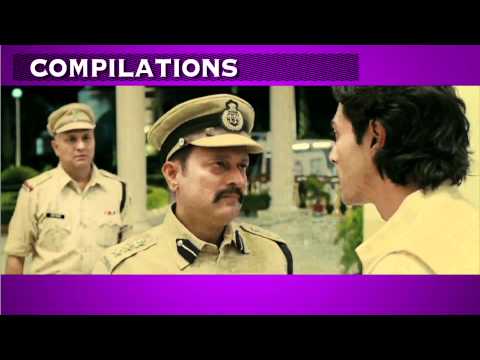 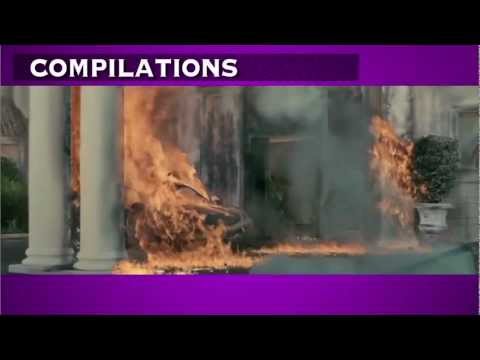 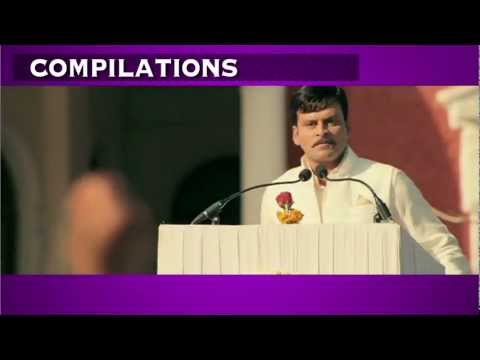 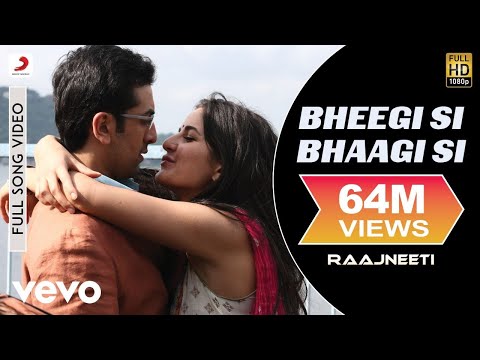 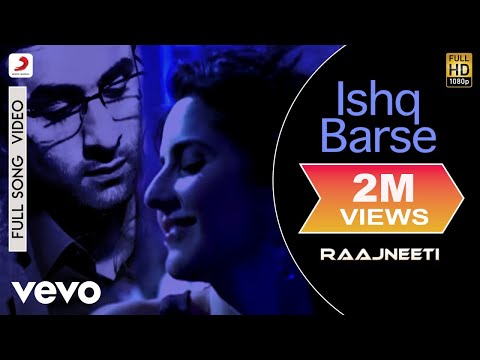 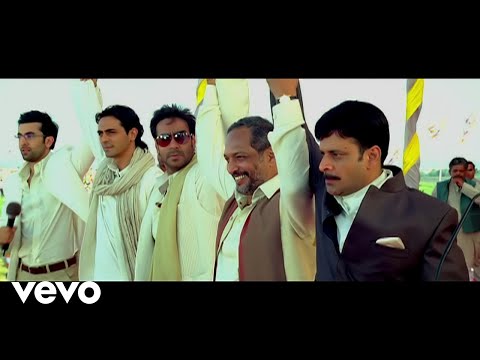 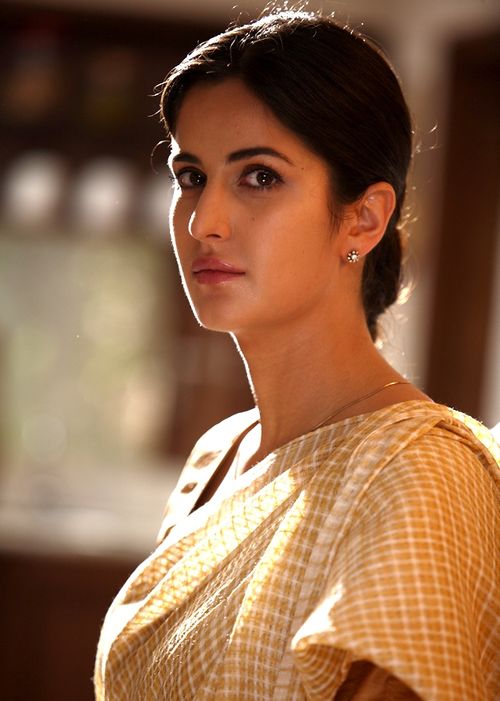 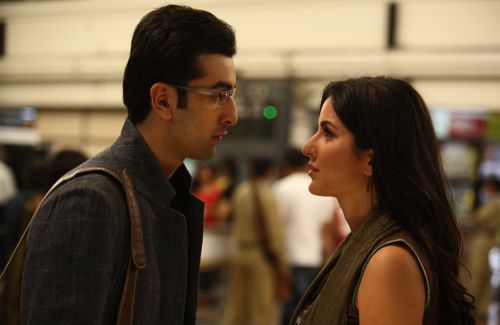