Cancel
Psychic Professor Xavier leads a school of skilled mutants called X-Men, a peacekeeping force to safeguard the world against a race of genetically mutated humans known as Homo Sapiens Superior. However, Magneto, a mutant with a powerful magnetic charge, has also begun to organize a team to strike first against what he believes to be a threat from humanity. When he kidnaps Rogue from the X-Men's compound, Xavier and his forces must rescue her, even as they continue to vie with Magneto for the fearsomely strong mutant battler Wolverine. Both Xavier and Magneto also have to contend with Senator Kelly, a heartless political leader who wants a final solution against mutants on both sides.
See Storyline (May Contain Spoilers)

In 1944 German-occupied Poland, 13-year-old Ian Lehnsherr (Brett Morris) is separated from his parents upon entering a concentration camp. While attempting to reach them, he causes a set of metal gates to bend towards him, as though attracted by a magnetic force, before being knocked out by guards.

Decades later, U.S. Senator Robert Kelly attempts to pass a "Mutant Registration Act" in Congress, which would force mutants to publicly reveal their identities and abilities. Present are Lehnsherr (Ian McKellen), now known as Magneto, and the telepathic Professor Charles Xavier (Patrick Stewart), who privately discuss their differing views on the relationship between humans and mutants.

In Meridian, Mississippi, 17-year-old Marie D'Ancanto (Anna Paquin) accidentally puts her boyfriend (Shawn Roberts) into a coma upon kissing him, which was caused by her yet not understood superhuman ability to absorb the life force and mutant abilities of anyone she touches. In fear, Marie, now going by the name Rogue, runs away to Laughlin City, Alberta. While at a bar, she meets Logan, also known as "Wolverine" (Hugh Jackman), who possesses superhuman healing abilities, heightened senses, and metal claws that protrude from his knuckles.

While on the road together, they are attacked by Sabretooth, a fellow mutant and an associate of Magneto. Cyclops and Storm arrive and save Wolverine and Rogue and bring them to the X-Mansion in Westchester County, New York. They are introduced to Xavier, who leads a group of mutants called the X-Men, who are trying to seek peace with the human race, educate young mutants on their powers, and stop Magneto from escalating the war with humanity.

Senator Kelly is abducted by Magneto's allies Toad and the shapeshifter Mystique and brought to their lair, where Magneto uses Kelly as a test subject for a machine that artificially induces mutation. Kelly uses his new mutant abilities to escape imprisonment. After Rogue uses her powers on Wolverine, she is convinced by Mystique (disguised as classmate Bobby Drake) that Xavier is angry with her and she should leave the school. Xavier uses his mutant-locating machine Cerebro to find Rogue at a train station. Mystique later infiltrates Cerebro and sabotages the machine.

At the train station, Wolverine convinces Rogue to stay with Xavier, but a fight ensues when Magneto, Toad and Sabretooth arrive and kidnap Rogue. Kelly arrives at Xavier's school, but dies shortly after due to the instability of his artificial mutation, which causes his cells to break down into a puddle of water. The X-Men learn that Magneto was severely weakened while testing the machine on Kelly, and realize that he intends to use Rogue's power-transferring ability so that she can power the machine in his place, which will kill her. Xavier attempts to use Cerebro to locate Rogue, but Mystique's sabotage causes him to fall into a coma.

Fellow telepath Jean Grey fixes Cerebro, and learns that Magneto plans to place his mutation-inducing machine on Liberty Island and use it to mutate the world leaders meeting for a summit on nearby Ellis Island.

The X-Men scale the Statue of Liberty. Storm electrocutes Toad, and Wolverine stabs Mystique. Magneto transfers his powers to Rogue, and forces her to use them to start the machine. Wolverine kills Sabretooth with the help of Scott and Jean. Storm uses her weather-controlling powers and Jean uses her telekinesis to lift Wolverine to the top of Magneto's machine. Wolverine saves Rogue when Cyclops knocks out Magneto, and destroys the machine. Wolverine touches the dying Rogue's face, and his regenerative abilities are transferred to her, causing her to recover.

Professor Xavier recovers from his coma. The group learns that Mystique is still alive, and impersonating Senator Kelly. Xavier tells Wolverine that near where he was found in Canada is an abandoned military base that might contain information about his past. Xavier visits Magneto in a prison cell constructed entirely of plastic, and the two play chess. Magneto warns him that he will continue his fight, to which Xavier promises that he and the X-Men will always be there to stop him.

Character Error
Marie, in her first scene, points to a map and says "Niagara Falls" which is on the New York-Ontario border but her finger is touching the Minnesota-Wisconsin border.

Character Error
During the Statue of Liberty fight, Mystique kicks Wolverine in the side of his head. Seeing as Wolverine's skeleton is laced with adamantium, it should have broken her foot. Yet, she shows no signs of injury or pain from it.

Continuity
In early scenes the filmmakers went to some effort to make Cyclops appear taller than Wolverine, but about half way through the film they just stopped, and suddenly Wolverine appears considerably taller than Cyclops (consistent with the difference in height of the actors themselves).

Continuity
Between when Cyclops blows open a door in the Statue of Liberty, and when he sees Jean in peril, he gains and loses a pair of gloves between shots.

Continuity
Senator Kelly boards a helicopter that is dark green and white in color with the Presidential Seal and the "United States of America" printed on the side. After they take off, the helicopter is blue and white and does not have the Seal nor the U.S. logo on it.

Continuity
When Storm and Cyclops stop Sabretooth at the beginning of the film, Cyclops places his hand on the visor to use his beam. In the next shot the beam is seen but both his hands are down, away from the visor.

Crew/Equipment Visible
The camera is visible in Cyclops' glasses when he is in Logan's room and says, "Oh, and Logan: stay away from my girl."

Factual Mistake
The Nazi Schutz-Staffel guards are wearing steel helmets. These were only used in combat situations, which did not include taking in and sorting victims for genocide. Camp guards wore "garrison caps" instead.

Factual Mistake
The Nazis separated the men from the women the minute they stepped off the train once they arrived at a concentration camp. Erik and his father would have been separated from his mother long before they made it as far as they did in the film.

Miscellaneous
When Wolverine hits the fallen tree, he and Rogue lunge forward before hitting the tree. Hitting the tree, Wolverine goes flying through the windshield and you can see the whole windshield is flying out but looking back at Rogue, it is back but cracked. In a real collision, he would have just hit the steering wheel and windshield and not fly through the windshield that far. He would need to be sitting on top of the car in order to fly out of the car that far when hitting the tree. Lastly, when wolverine is told to wear a seat belt, they are not moving very fast but when they hit the tree, Wolverine flies out the window a distance one would need to be going over 100 to do so. If he WAS moving fast enough the whole front end of the truck would be crushed.

Revealing Mistakes
In the train station, as Sabretooth is coming up behind Storm at the ticket window, he throws the guy behind her out of the way. The line attached to the stuntman is visible in this shot as he is yanked out of the way.
Trivia:
The line, "What do they call you, 'Wheels'?'" was improvised by Hugh Jackman (the scripted line was, "What do they call you, Baldie?")

In order to get into character, Hugh Jackman would take ice cold showers every morning of filming. He figured that this mindset, wanting to scream and lash out at something, but having to hold it in, was the mentality that Wolverine is in constantly. He then made cold showers his Wolverine preparation routine for each movie featuring the character.

A chess master had to come in to teach Sir Patrick Stewart and Sir Ian McKellen how to play chess, since neither of them knew how. 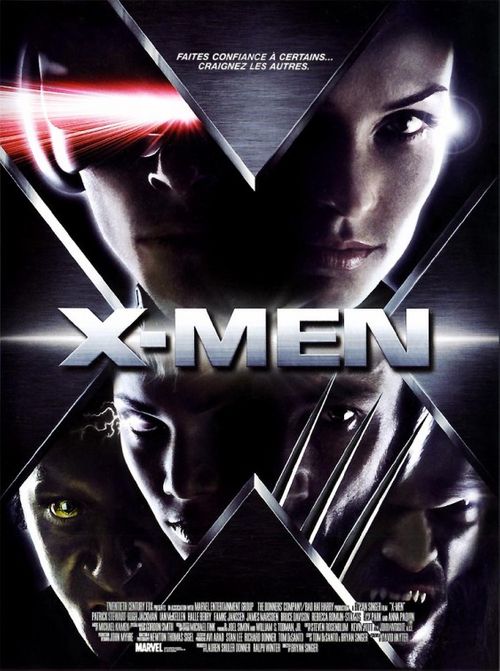 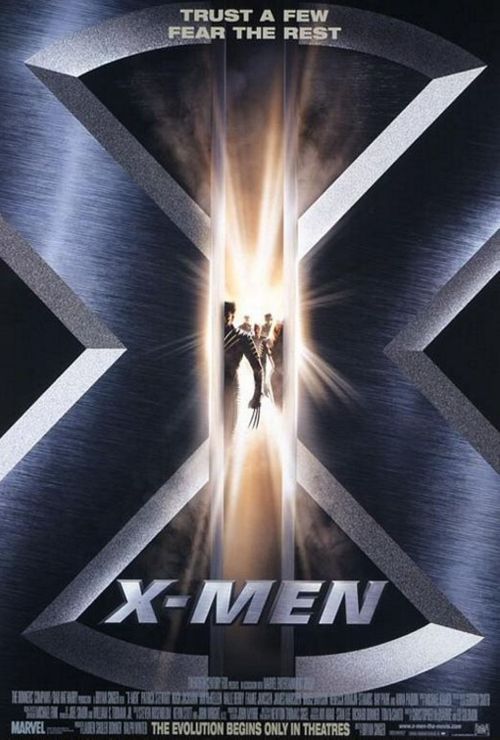