Cancel
On the way home from a mission for the Company, the Nostromo's crew is woken up from hibernation by the ship's Mother computer to answer a distress signal from a nearby planet. Capt. Dallas' rescue team discovers a bizarre pod field, but things get even stranger when a face-hugging creature bursts out of a pod and attaches itself to Kane. Over the objections of Ripley, science officer Ash lets Kane back on the ship. The acid-blooded incubus detaches itself from an apparently recovered Kane, but an alien erupts from Kane's stomach and escapes. The alien starts stalking the humans, pitting Dallas and his crew against a malevolent killing machine that also has a protector in the nefarious Company.
See Storyline (May Contain Spoilers)

The commercial towing spacecraft Nostromo, owned and operated by the Earth mega-corporation Weyland-Yutani, is on a return trip to Earth hauling a refinery and twenty million tons of mineral ore, with a seven-member crew in stasis. Detecting a transmission of unknown origin from a nearby planetoid, LV-426, the ship's computer, MU-TH-UR 6000 (or Mother) awakens the crew.

Acting on standing orders from their corporate employers, they set out to investigate the transmission's source, in effort to locate the possible alien life. The Nostromo lands on the planetoid. Upon landing, their ship is damaged.

Dallas, Kane, and Lambert discover that the signal is coming from a derelict alien spacecraft. Inside they find the remains of a large alien creature whose ribcage appears to have been broken outward from the inside. Meanwhile, Ripley determines that the transmission is actually some type of warning rather than a distress signal.

Kane discovers a vast chamber containing numerous eggs, and upon closer inspection, one of them releases a squid-like creature that attaches to his face. Rendered unconscious, Kane is carried back to the Nostromo. As acting senior officer aboard the ship, Ripley refuses to let the exploratory team aboard, citing the strict quarantine regulations. But acting on improper orders from Dallas, Ash violates quarantine protocol not to allow a possible infected crew member on the ship by opening the airlock.

After an unsuccessful attempt by Ash to surgically remove the creature from Kane's face, which appears to be glued onto him, the crew discover that the creature's blood contains a highly corrosive acid. Seemingly, it is also feeding Kane 'oxygen' down his throat, which Ash states may be keeping him alive. The creature eventually detaches from Kane's face by itself and is later found dead. Ash insists that the alien corpse be returned to Earth for study. The Nostromo leaves the planetoid and resumes its trip to Earth.

Kane awakens from his ordeal with some memory loss, but no other apparent ill effects. During the crew's final dinner before re-entering stasis, he begins to choke and convulse in extreme pain until a small alien creature bursts from his chest, killing him instantly. The creature then escapes into the depths of ship. Kane's body is 'buried at sea' by ejection into deep space.

Since killing it with conventional weapons could result in its acidic blood breaching the ship's hull, the crew attempts to locate and capture the creature by fashioning motion trackers, electric prods, and flamethrowers. However, the Alien has grown at an unprecedented rate and is now seven feet tall with incredible strength and agility.

It attacks Brett and disappears with his body into an airshaft. Dallas enters the Nostromo's labyrinthine airshaft network, intending to force the Alien into an airlock, but it ambushes him. When the others find no trace of Dallas, Lambert realises that the alien is purely aggressive and intent on killing the entire crew, imploring the remaining crew members to escape in the ship's shuttle.

Ripley, now in command, explains that the shuttle will not support four people, and recommends that they continue with Dallas's plan of cornering and flushing out the Alien.

Accessing the ship's central computer, Ripley discovers that Ash has been ordered to return the Alien to Weyland-Yutani even at the expense of the crew's lives. Ash then appears and when confronted, he attempts to suffocate Ripley, but Parker and Lambert intervene, decapitating and impaling Ash, revealing him to be an android programmed to act on orders from the company itself.

Ripley theorizes that the company wants the Alien for its weapons division. Before they destroy his remains, Ash smugly predicts that the others will not survive the indestructible "perfect organism" that they are up against.

The three remaining crew members then agree to arm the Nostromo's self-destruct mechanism and escape in the shuttle. While gathering the required stasis coolant, Parker and Lambert are ambushed and killed by the Alien. Now alone, Ripley initiates the self-destruct sequence herself and heads for the shuttle with the crew's cat, but finds the Alien blocking her way.

She retreats and unsuccessfully attempts to abort the self-destruct, then returns to find the Alien gone and narrowly escapes in the shuttle as the Nostromo and its enormous cargo is destroyed in a massive explosion.

As she prepares to enter stasis, Ripley discovers that the Alien has hidden aboard the shuttle. She puts on a spacesuit and opens the shuttle's main door, causing explosive decompression which forces the Alien into the shuttle's open doorway. She propels it out into space by shooting it with a grappling hook, but the gun catches in the closing door, tethering the Alien to the shuttle.

As it attempts to crawl into one of the engines, Ripley activates them, blasting the Alien with white-hot plasma and sending it tumbling into deep space. She then records a final ship's log entry, places herself and the cat into stasis and resumes the voyage back home.

Tagline: The Scariest Movie Ever Made. Experience it only on the big screen

Based on 0 rating
0 user 1 critic
Did you know? Harrison Ford was offered the role of Captain Dallas but turned it down. Read More
1 Critic Review

Continuity
During the conversation about Brett being a parrot, the length of his cigarette constantly changes.

Crew/Equipment Visible
When Dallas is crawling around through the bowels of the Nostromo before he is taken by the alien, you can see a dolly track lining the floor.

Crew/Equipment Visible
Just after the alien bursts from Kane's chest, you can see 2 steel rods supporting either side of the head. They disappear into the neck when the body is raised high enough.
Trivia:
The alien ship's egg chamber had blue laser lights that were borrowed from The Who. The band was testing out the lasers for their stage show in the soundstage next door.

Four cameras were used for the chestbursting scene. It was filmed in one take.

The tendons of the beast's ferocious jaws were made with shredded condoms.

Harrison Ford was offered the role of Captain Dallas but turned it down. 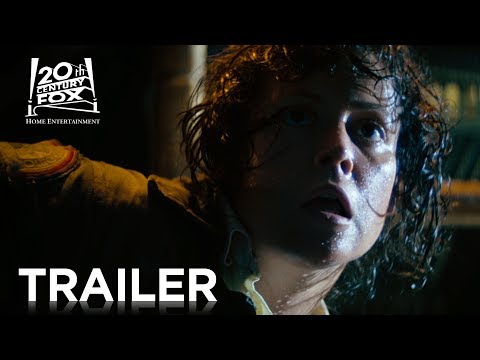 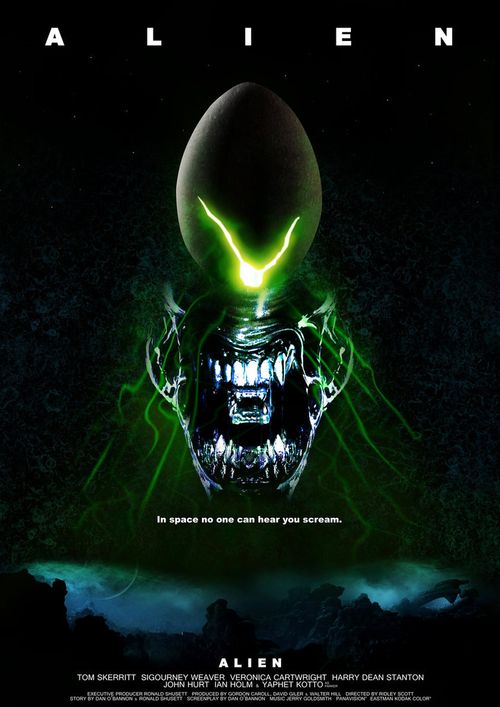 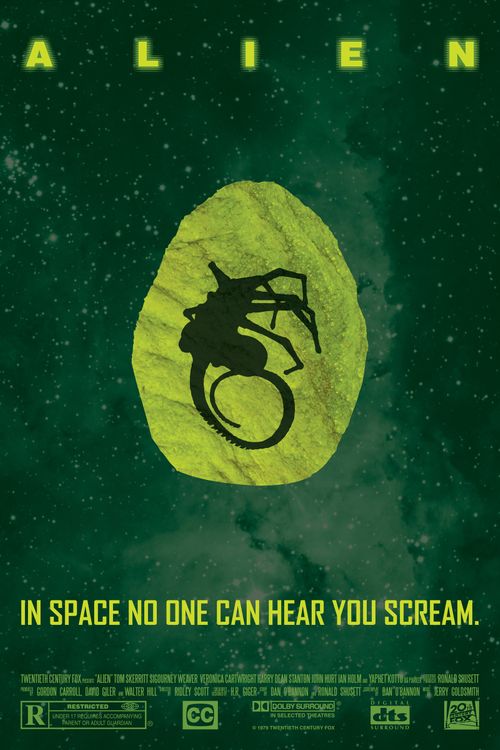 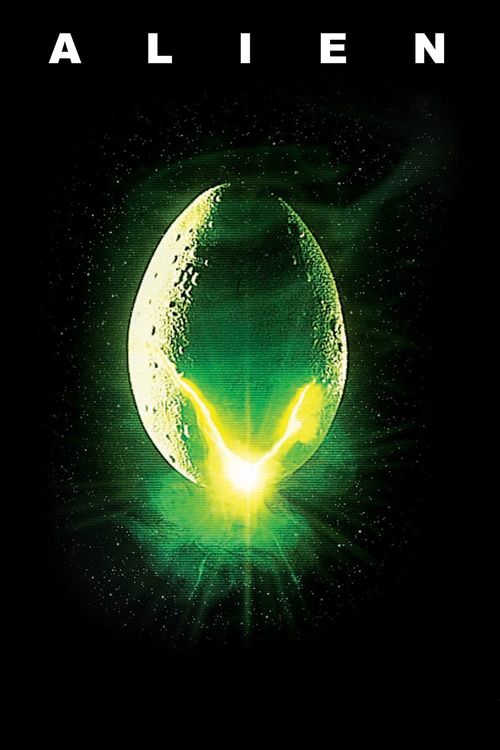